Got down to the GW on the weekend for a big game with the Cub.  And I do mean big.  We both had more than 110 Power Level, so maybe 2500 points, give or take?  I pretty much took all the Khorne stuff I had, and he took a space marine force to more or less match it. 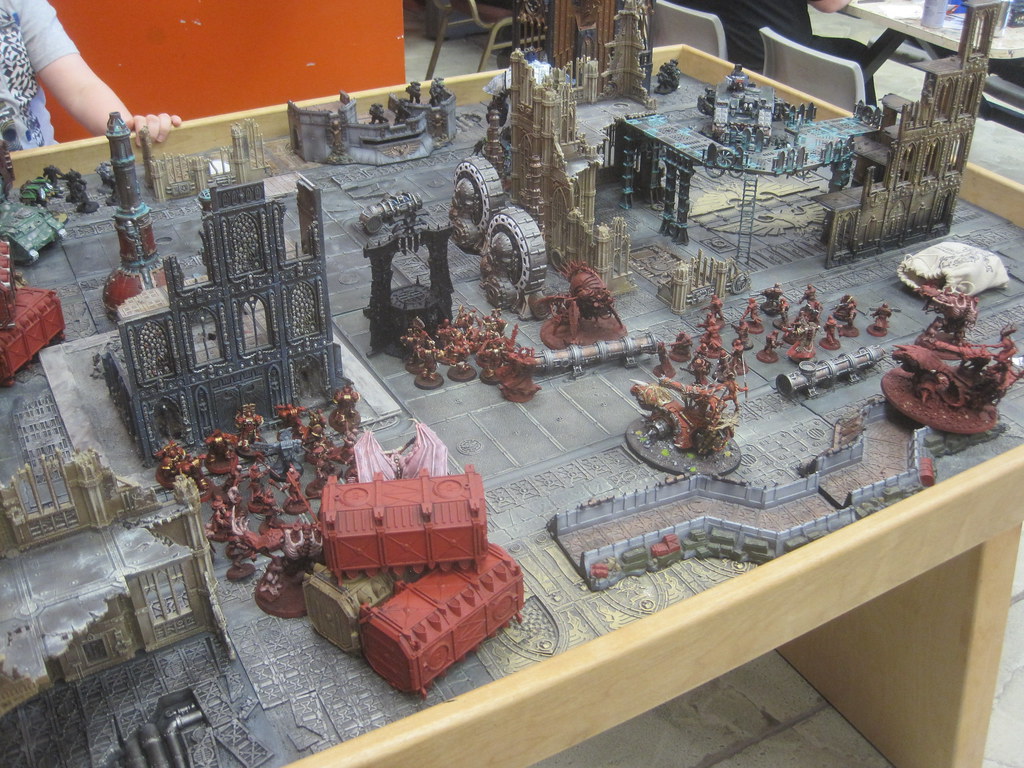 We were both about half painted, but there was enough stuff done up on both sides it still looked pretty good, and, as it turned out, it was a smashing game.  Cub's Salamanders have the edge at range, but my Khorne has it in close combat, although both forces have "good stuff" in the other category.  It makes for a nice match-up. 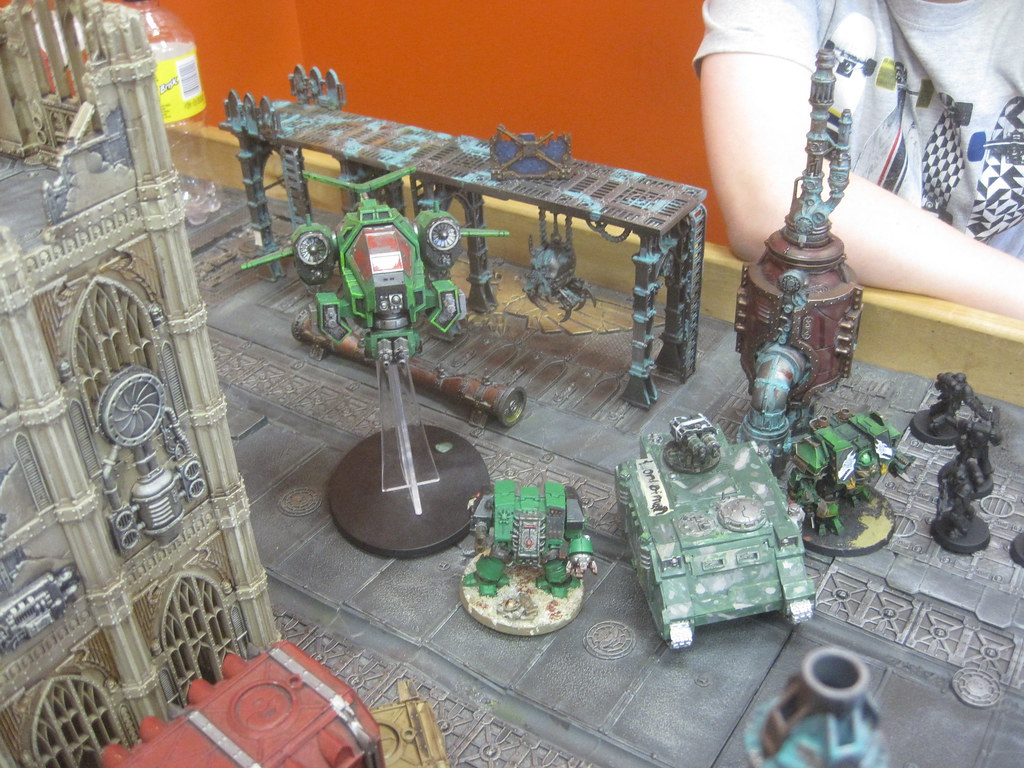 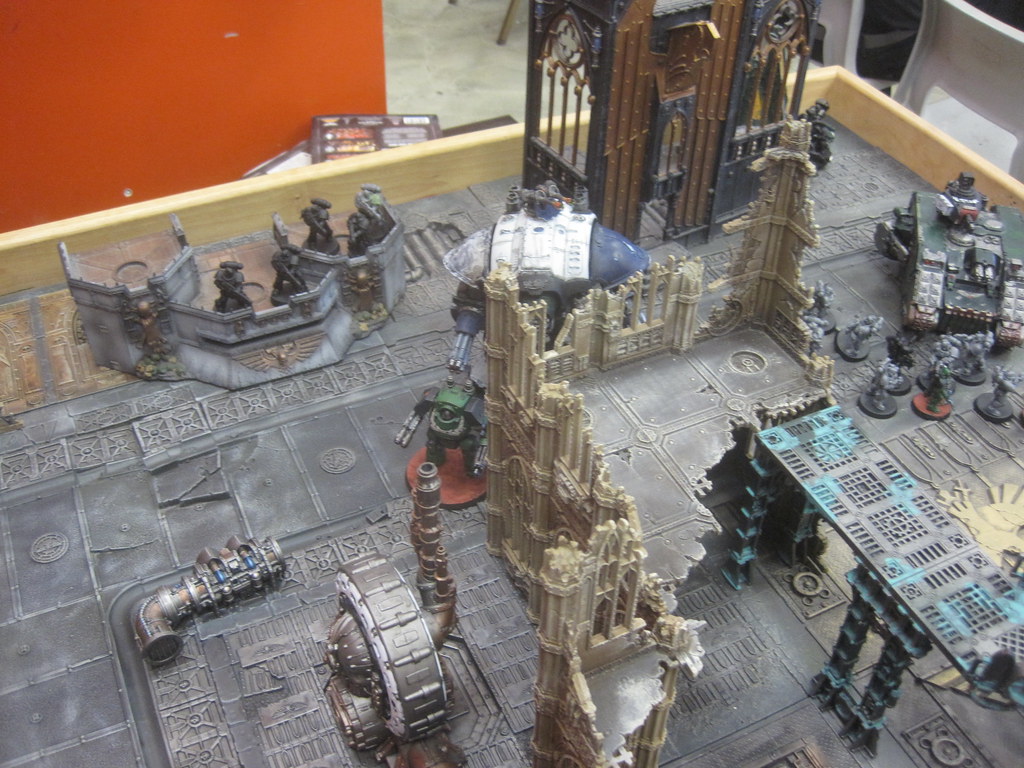 We used the open war cards, as per usual in our games, and ended up with a sort of chevron deployment, and an objective of "kill the other guy" - although you only got credit for taking out whole units.  I had a slight edge in Power Level, so Cub ended up with a Ruse, in this case, his army was immune to battleshock, as long as his Warlord was on the table.  We also drew a twist for a metoric bombardment, but completely forgot to use it in the game ;)

Turn one saw me weathering a fair bit of firepower (between shooting an battleshock, he wiped both my 20-man cultist units off the table), and then, on my turn, drop in and charge most of my daemons. 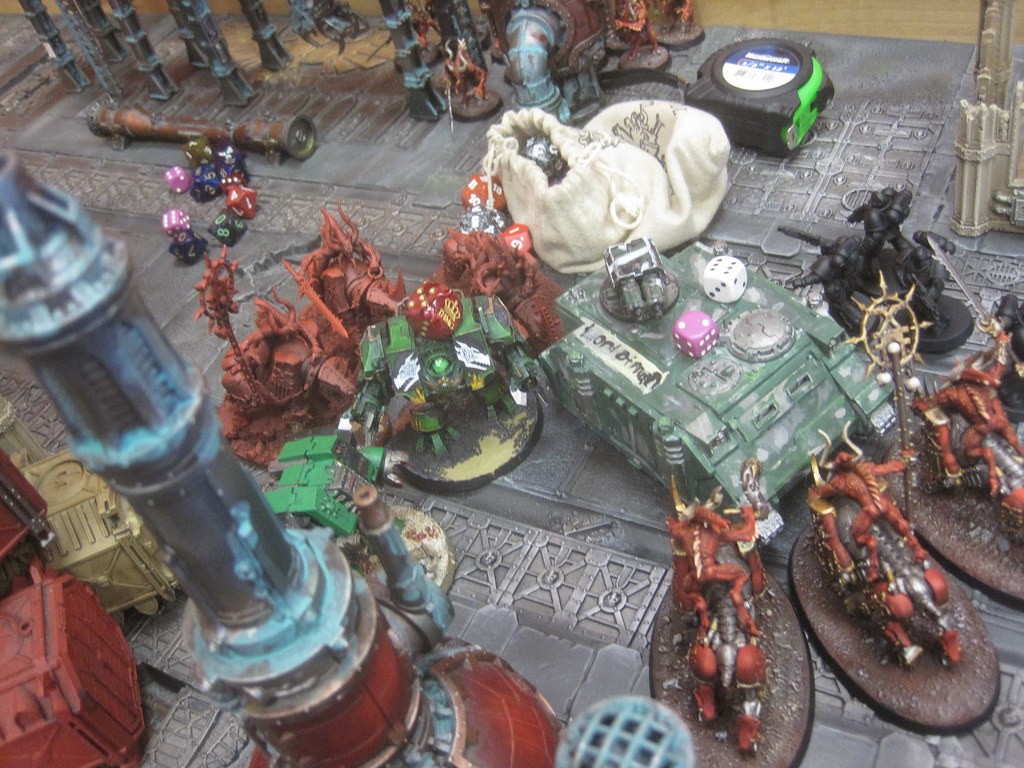 Playing this big a game, I had plenty of Command Points to throw around, and actually got to use some fun stratagems (including the one that lets you deepstrike dameon units). 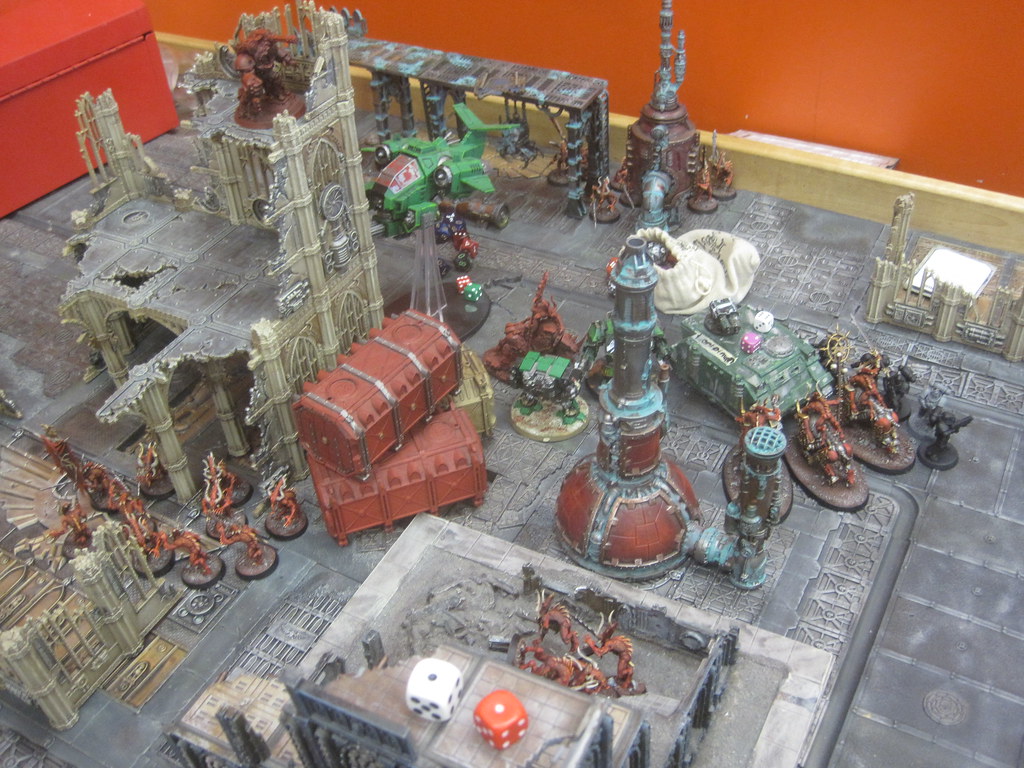 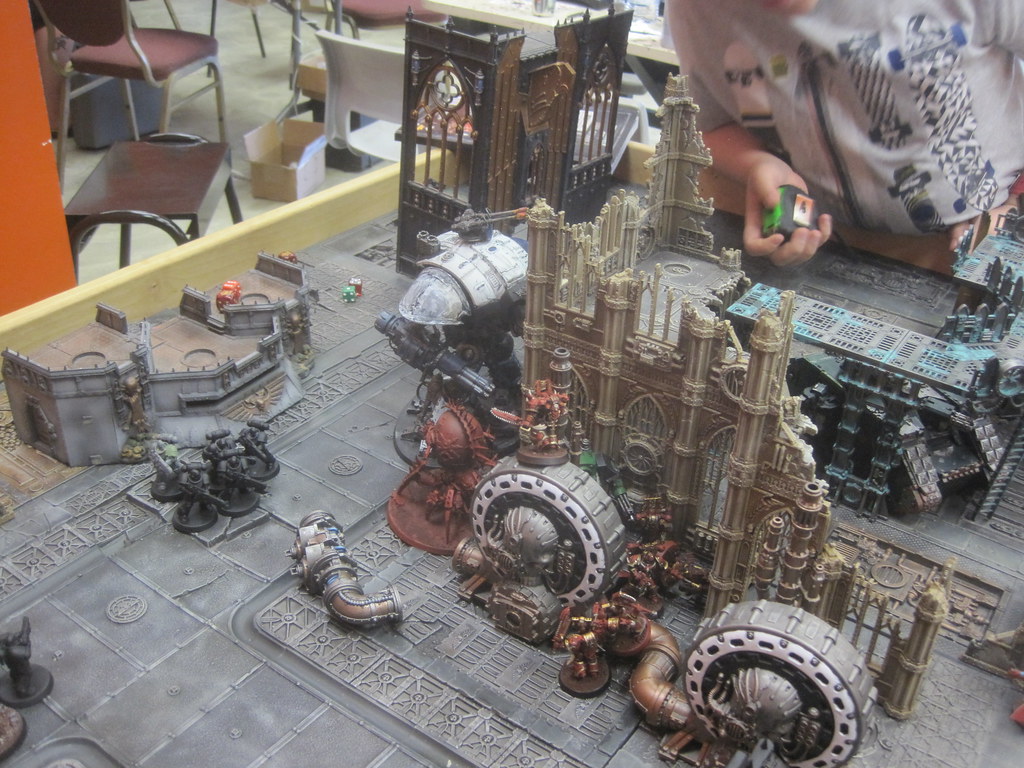 The Cub played really well, cherry picking my softer units, and picking up points at a fair clip.  I think he could have used his knight a little more aggressively, like he used his land raider, but otherwise, he played a tight game.  We ended up almost rotating around the table, both of us sweeping the opponents left flank. 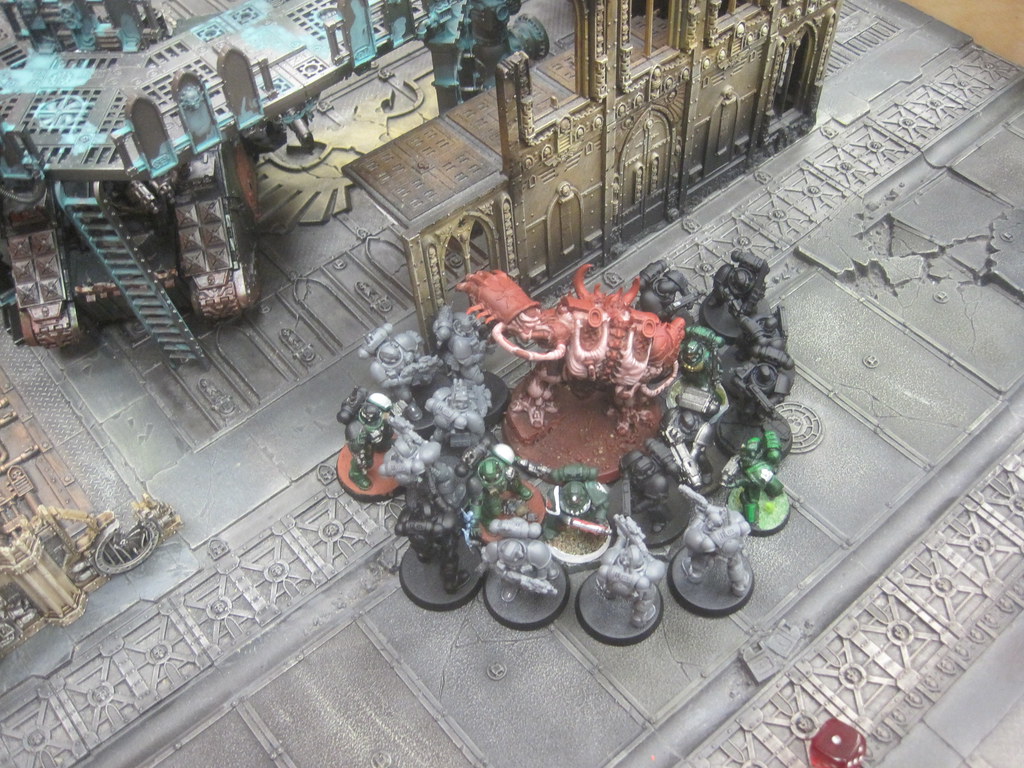 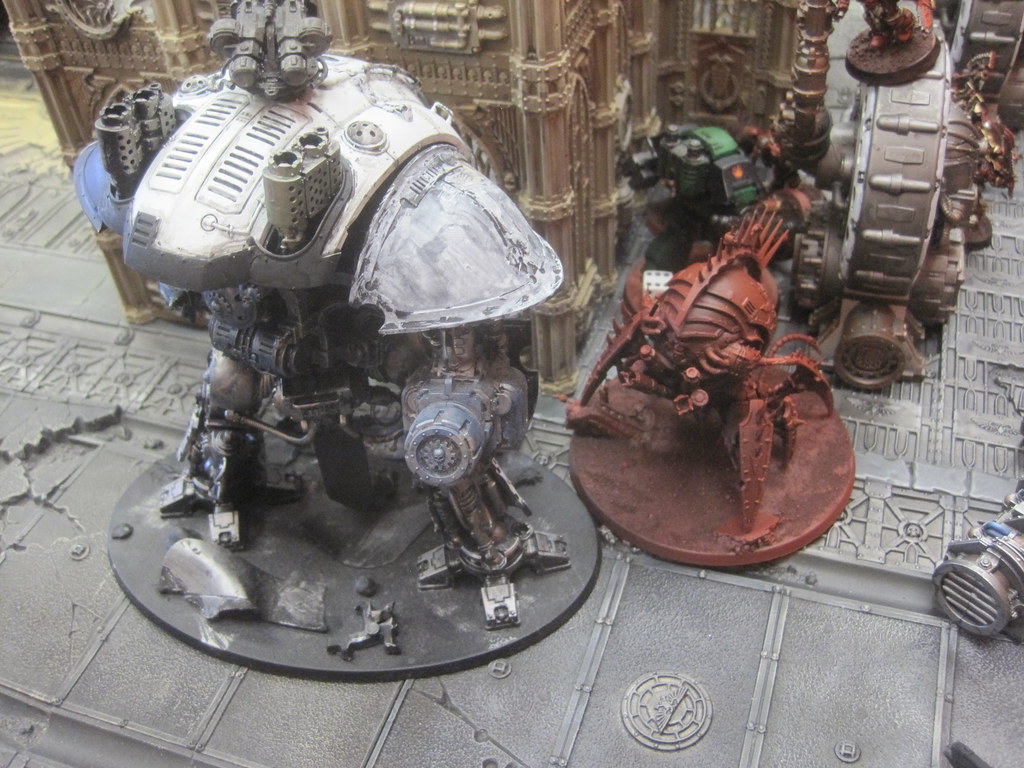 I was really impressed by my Bloodcrushers this game.  I deepstruck them for the first time, and thus actually managed to get them into combat.  They just had an upgrade to their profile, getting a little more durability, and were a solid little unit for me in game. 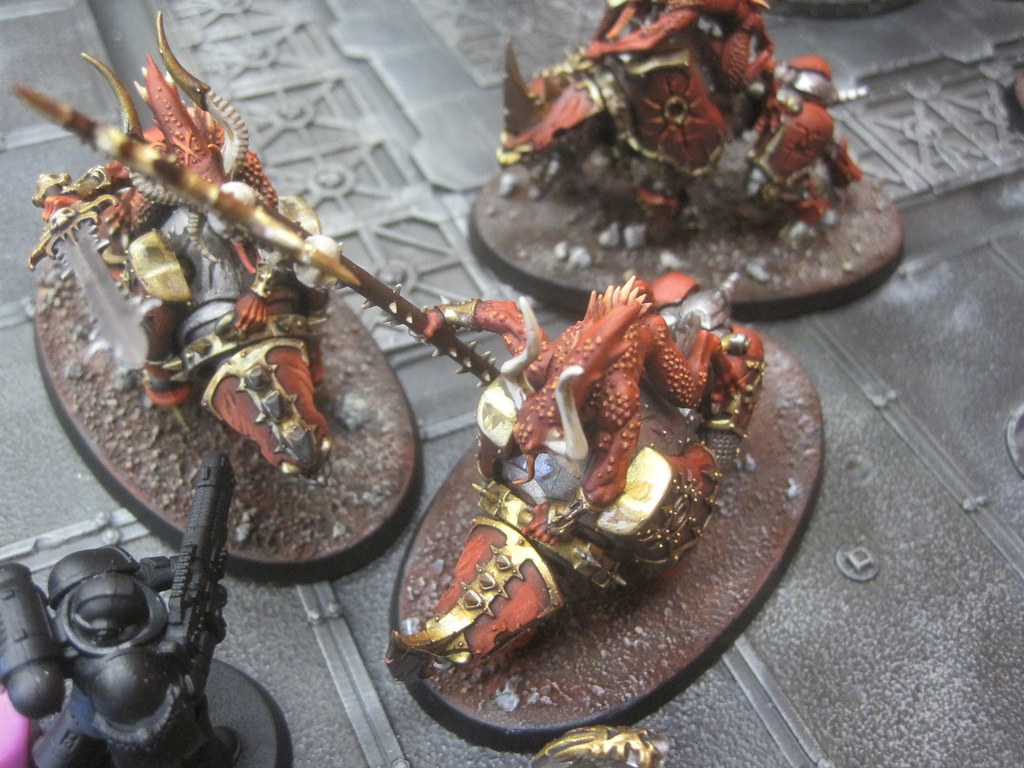 In the end, it pretty much came down to a couple of rolls.  I managed to get in both Anghre Bh'aB, my cc Hellbrute, and Anubarak, my Dameon Prince, onto Cub's knight.  As both charged, they got to fight before the knight, and the combo is pretty killy.  Even so, one more armour save, or one less wound, would have done it, and Cub would have edged me out for the win.  As it was, the old man took this one.

Super fun to get in a game with my boy, and I find when we don't have to rush, bug games like this can be quite fun.  I'm jazzed up to paint some Khorne now, which is always a sign of a good game.

Posted by fireymonkeyboy at 11:10 AM