Fear not, those of you who pay attention for the historical content, all is not lost.  I've still been puttering with the 6mm Russians, and have some updates in the queue.  If late, however, most of the gaming has been of the GW variety, including a couple of games of 40k with my mixed Khorne, one against the Cub and his Salamanders, and one against a local gaming buddy, Dustin, who ran a rather nice Genestealer cults army.

Cub and I played a fairly straightforward game: three objectives, whoever controlled the most at end of game won, if anyone controlled all three at end of the turn, they won.  Story of the game was the bloodletter "bomb" I set off fairly early in the game.  There's a stratagem in the Daemons codex that lets you "deepstrike" a unit onto the table.  I use it to drop a max unit of bloodletters (which are good in close combat) and a Khorne Daemon character (which lets them re-roll charges, and makes them better) on the table, with an item that lets them charge further than normal.  Basically, it lets me guarantee eliminating 1-2 units, and tie up several other for a turn or two, depending on how an opponent deploys. 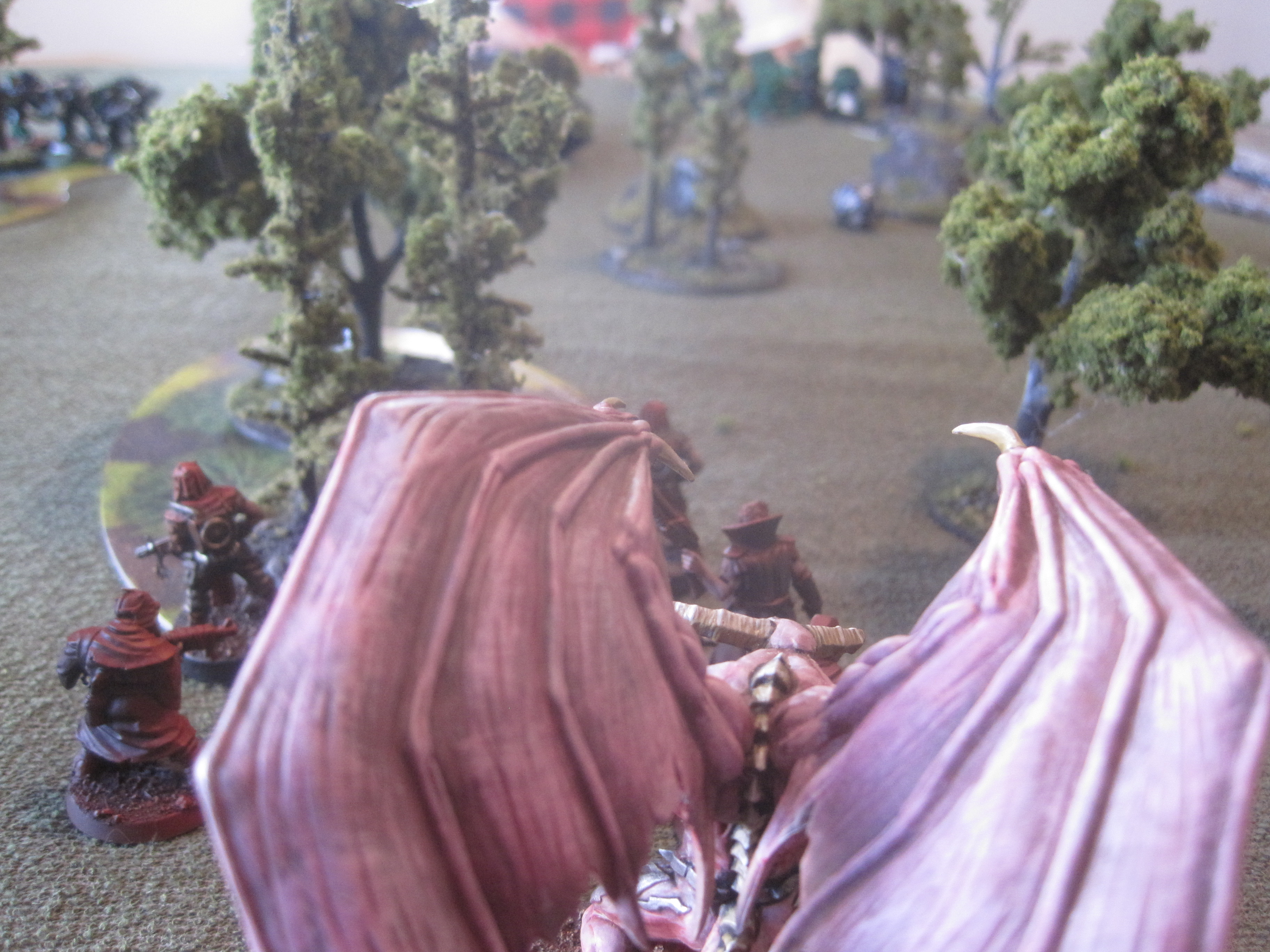 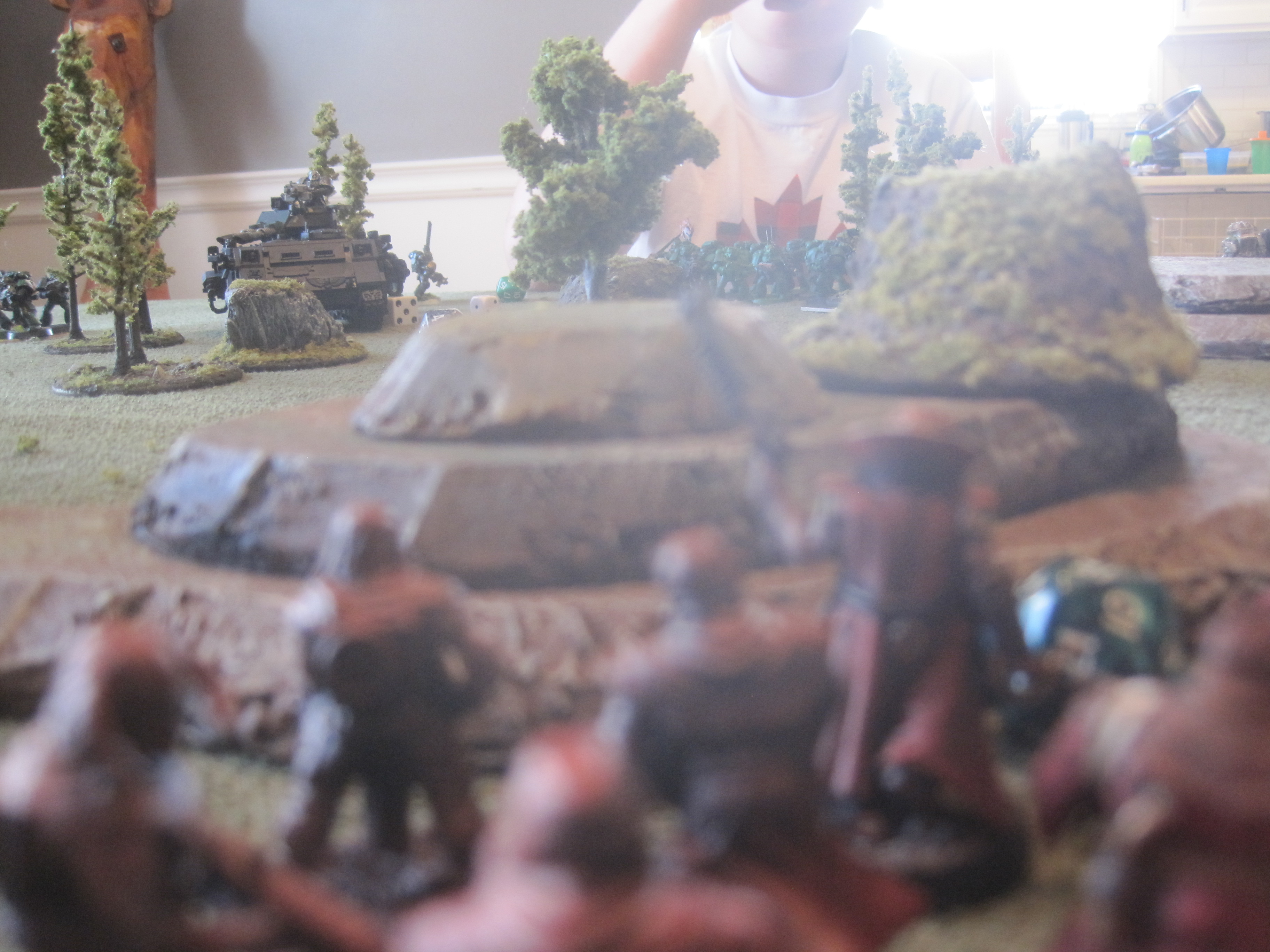 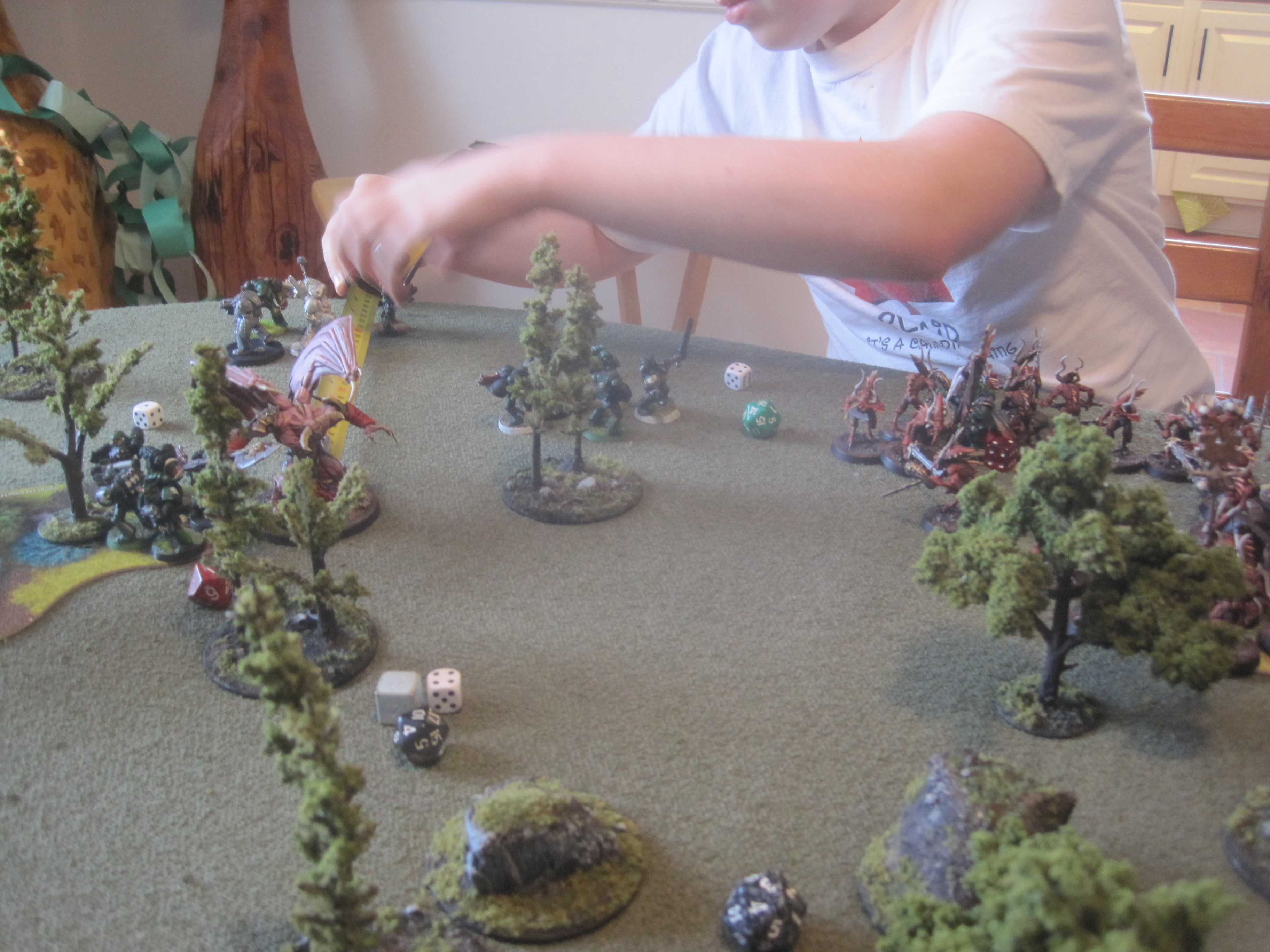 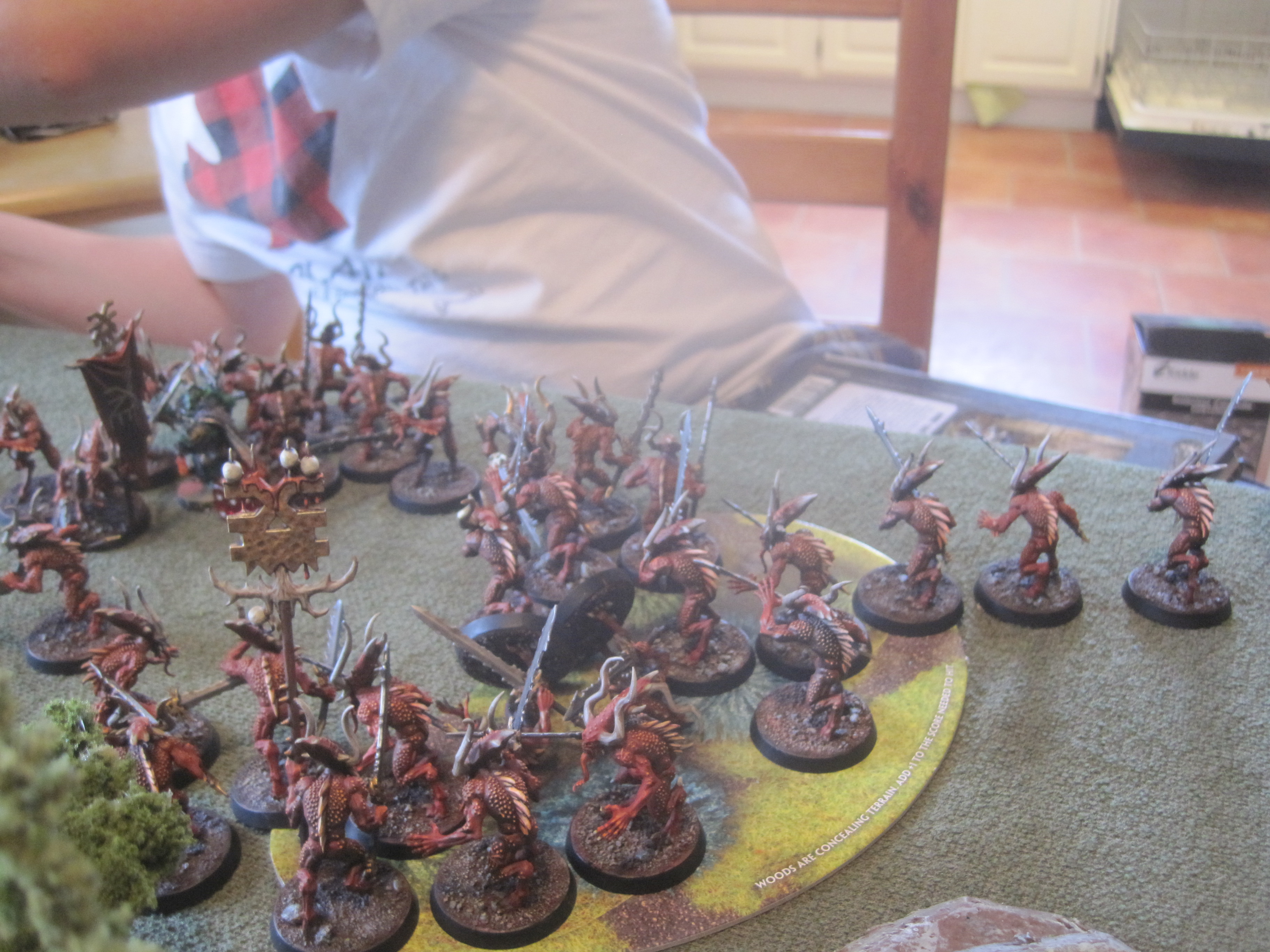 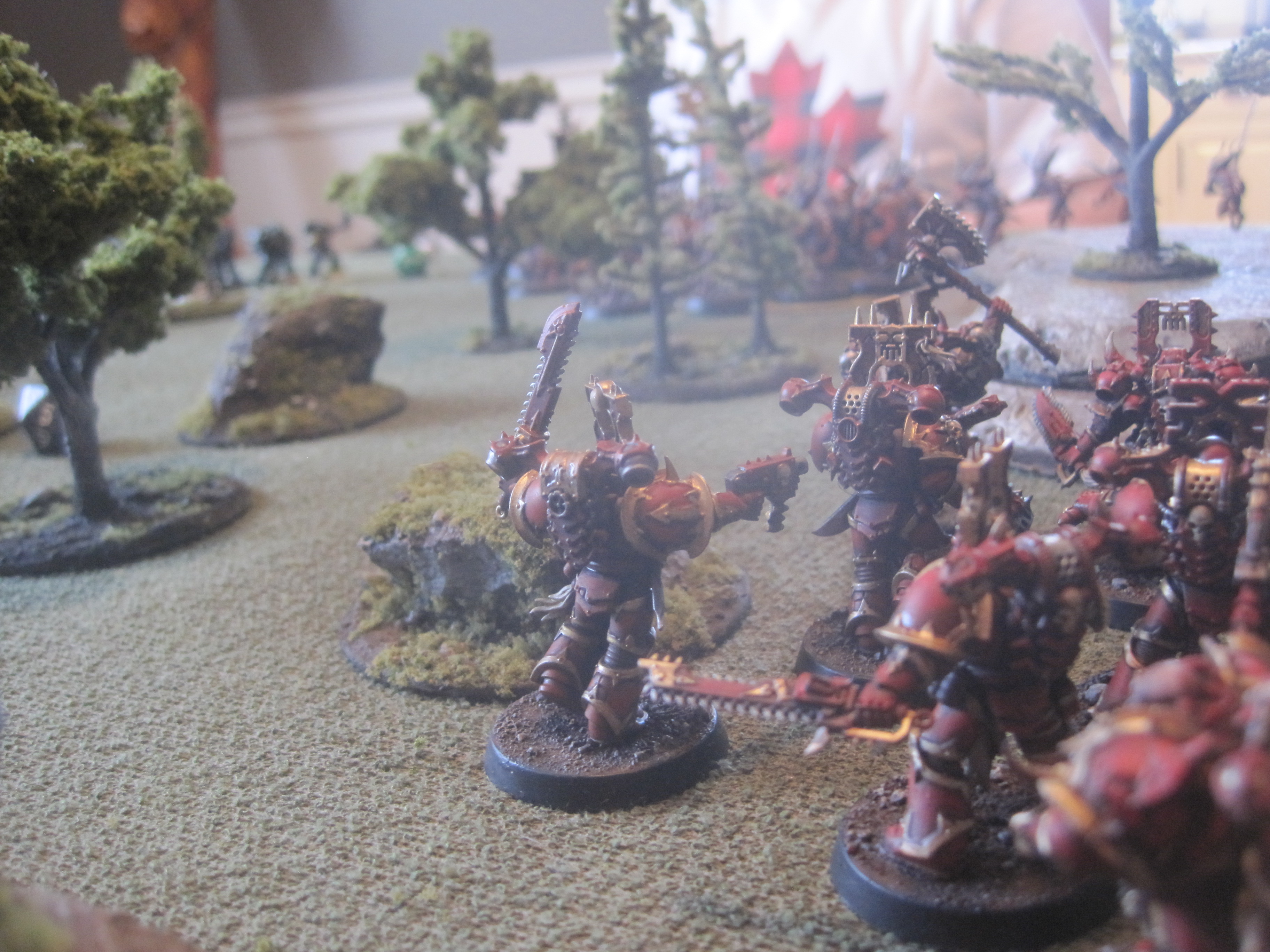 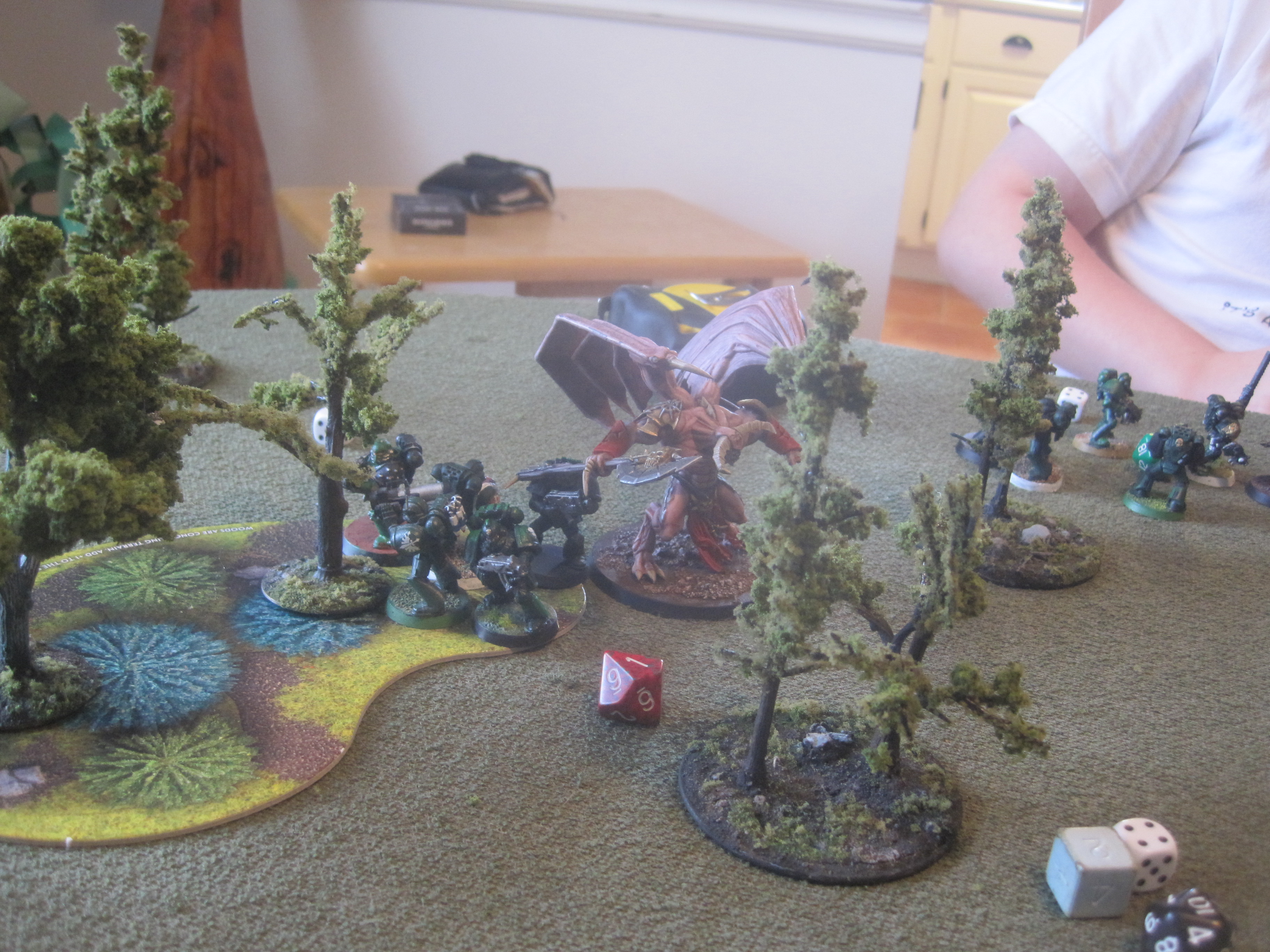 In our game, it meant tearing a whole through the middle of his army, seizing the objective on Cub's side of the table, and putting him on his back foot in a big way.  Although he pushed back pretty hard (taking out my unit of berzerkers, which are arguably even better in combat than Bloodletters), the impact of "the bomb" meant I could get the rest of my army up the table and into the fight, and in close combat, Khorne has the advantage.  We called it after about turn 3 when it was clear the Marines weren't going to pull it out.

I also got in a larger game (about 1750 points, nearly double the usual with the Cub) down at the GW.  We played "The Scouring" scenario, with 6 objectives.  This one was interesting for me, in that Genestealer Cults essentially deploy their entire army either in ambush (you know something is there, but not what) or deepstrike, which meant that I was more or less reacting for the first couple turns - something I'm not used to doing given how my army works. 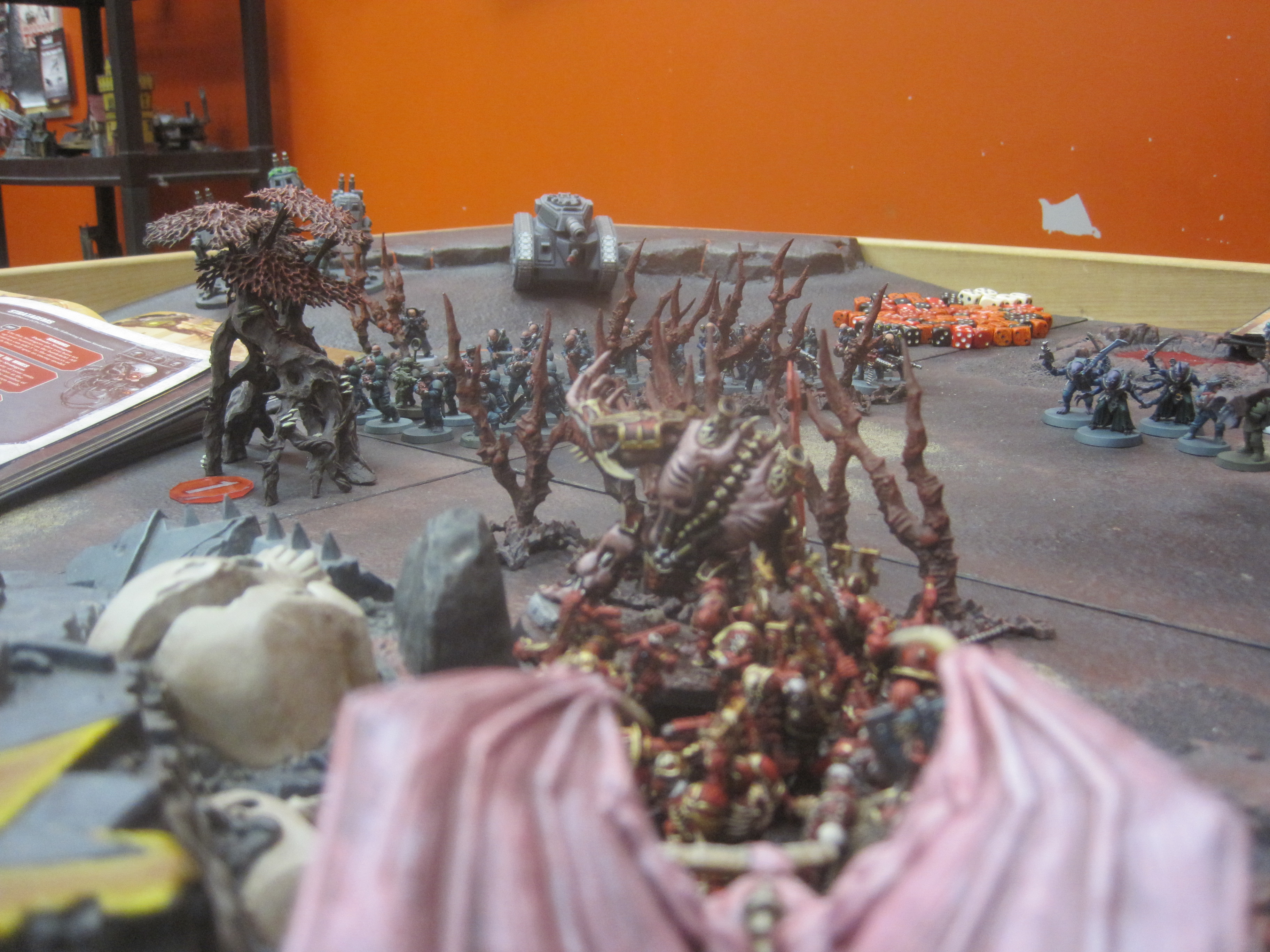 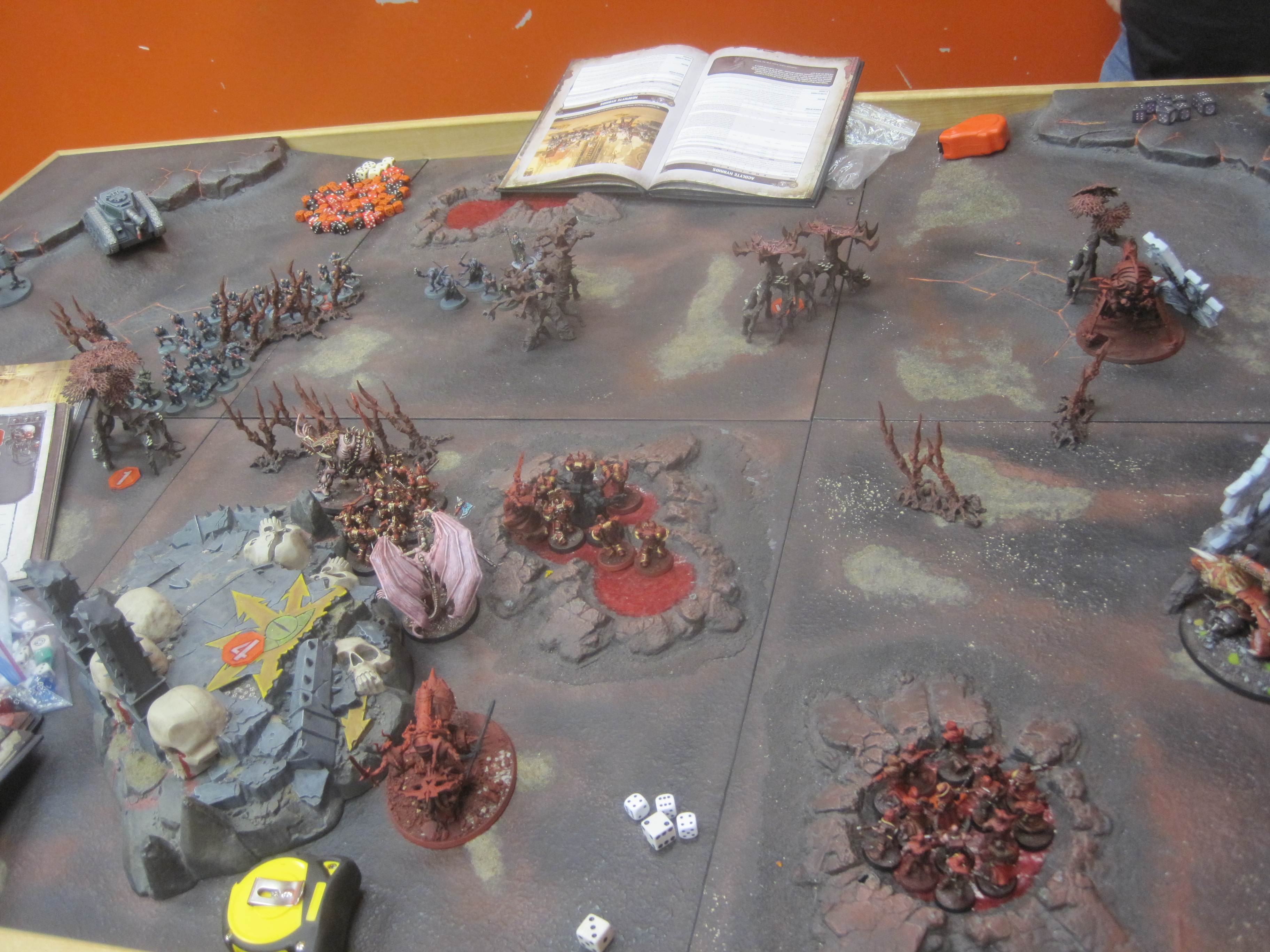 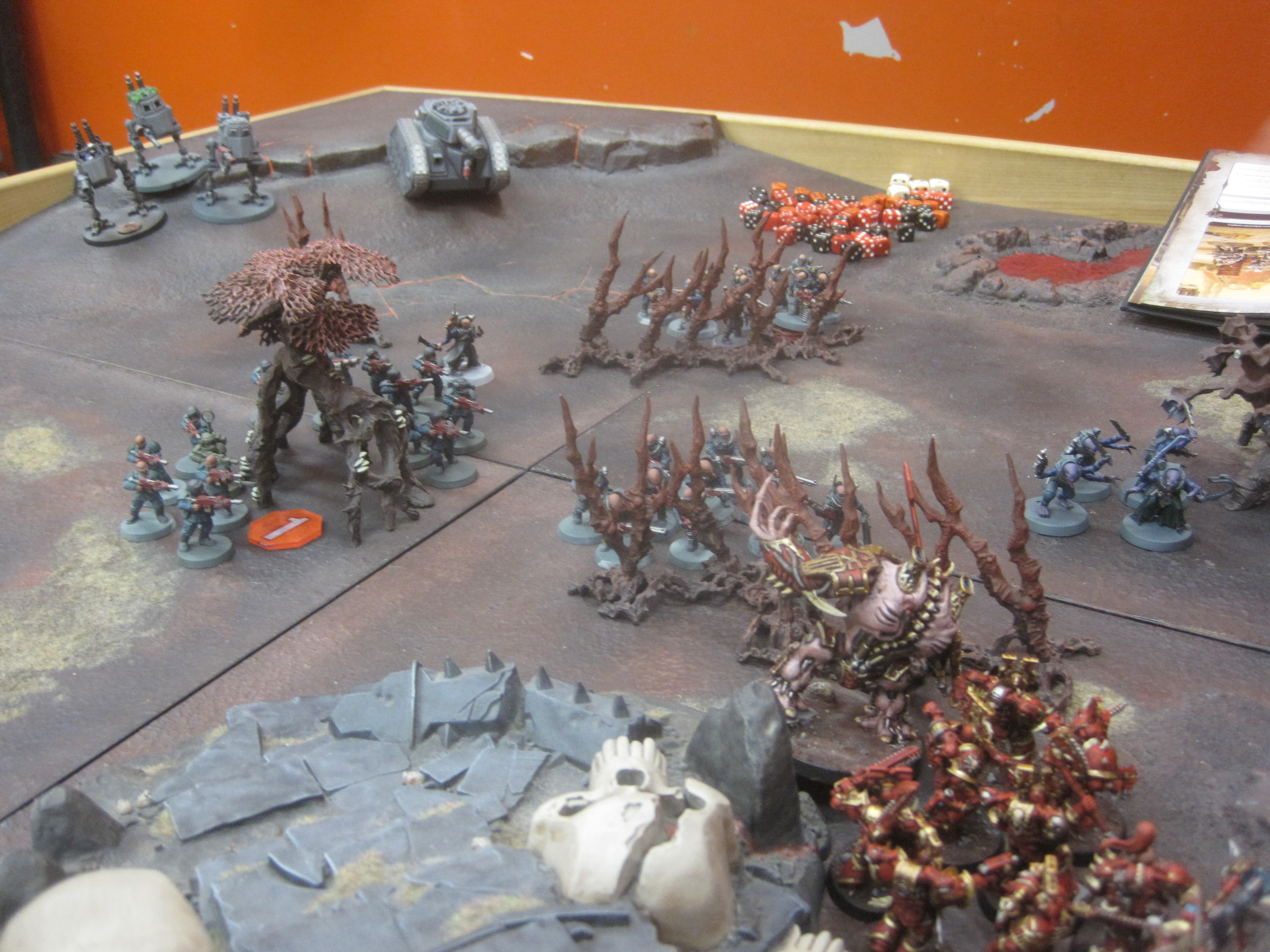 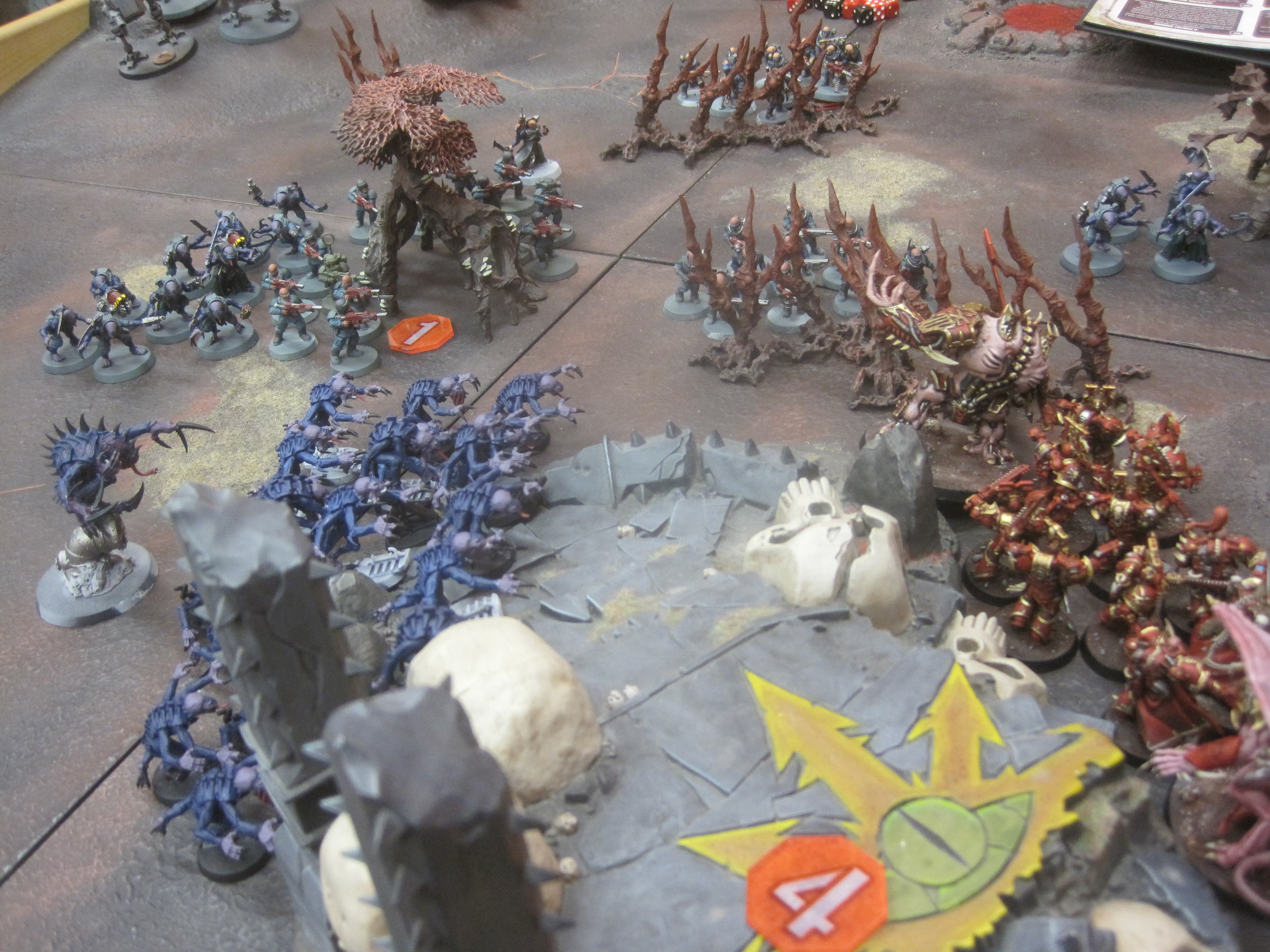 By the end of turn one, I was more or less surrounded, with my more isolated units facing an uphill battle, and the core of my army taking fire from multiple units, while a LARGE unit of genestealers (super-killy close combat unit) and a GS patriarch (even more killy, and a buffing unit) up in my grill. 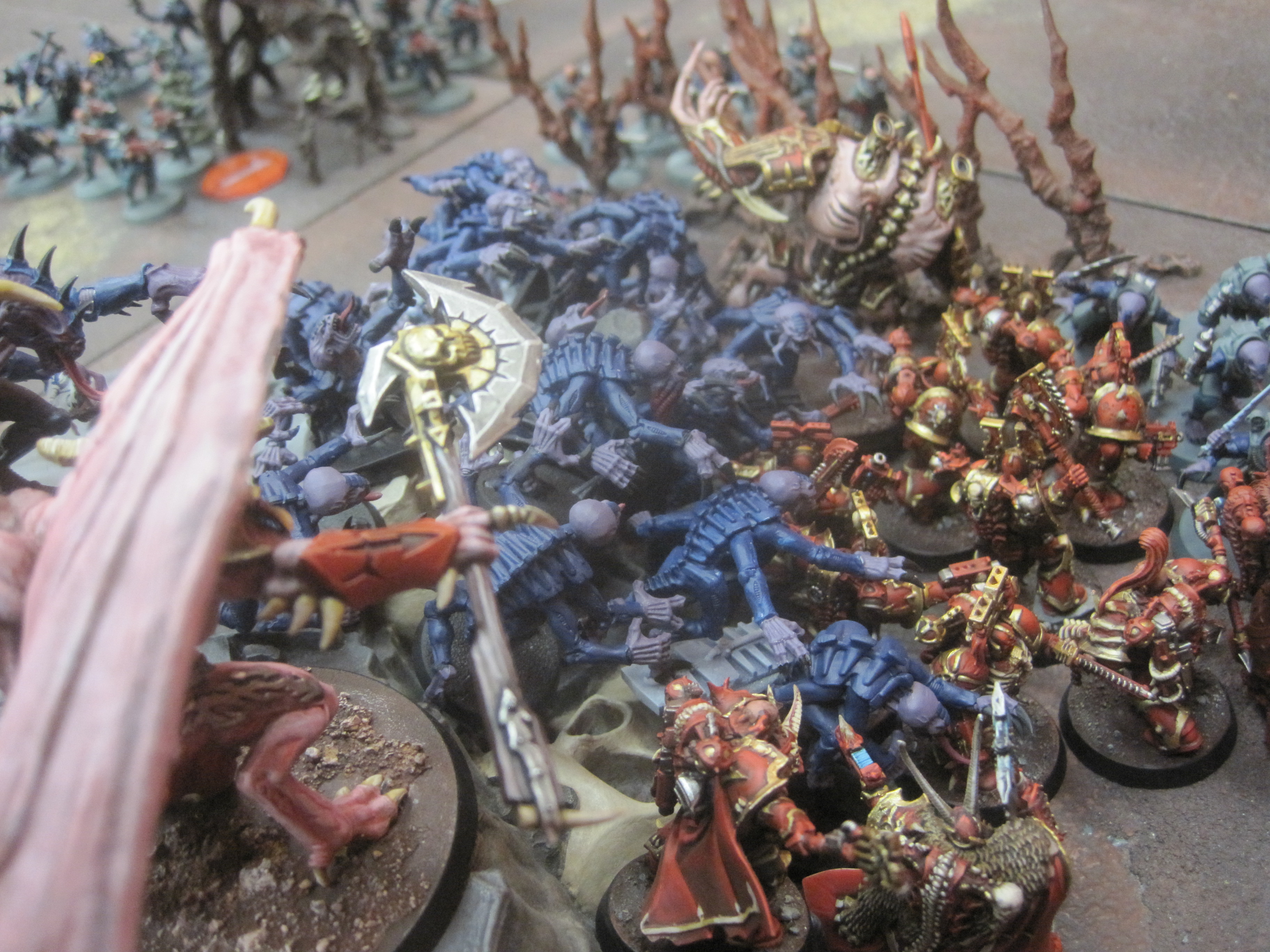 Thankfully, Khorne is mighty; while he pretty much gutted my berzerkers  (seeing a pattern here?  they tend to be priority targets), Dustin managed to flub just enough rolls to keep my Daemon Prince in the game.  This was good, because my Daemon Prince kills things rather reliably, as do the other Khorne characters, all of which were in range to give each other synergistic buffs.  One dead patriarch, and several dead Genestealers later, and the initiative shifted over to me. 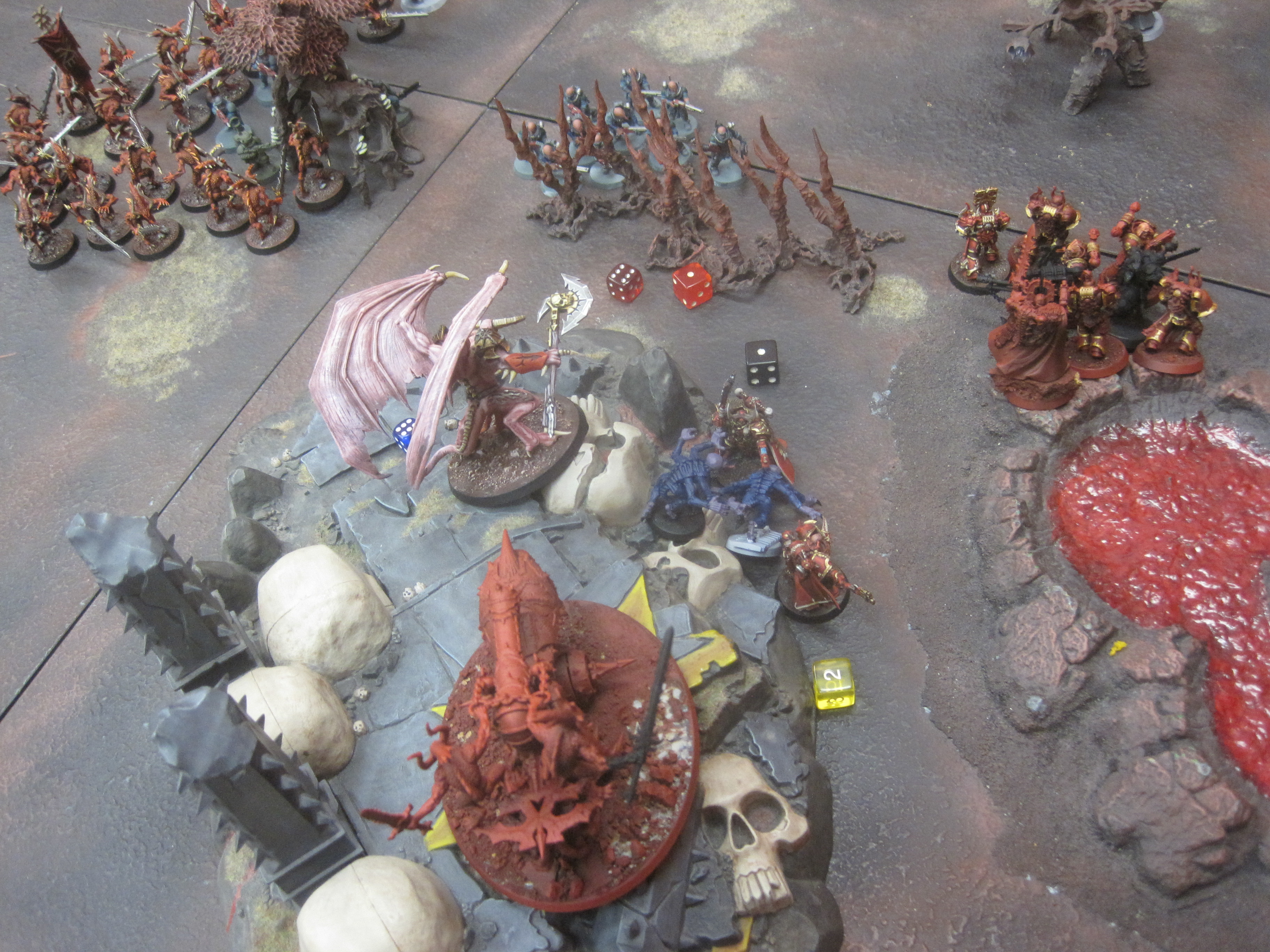 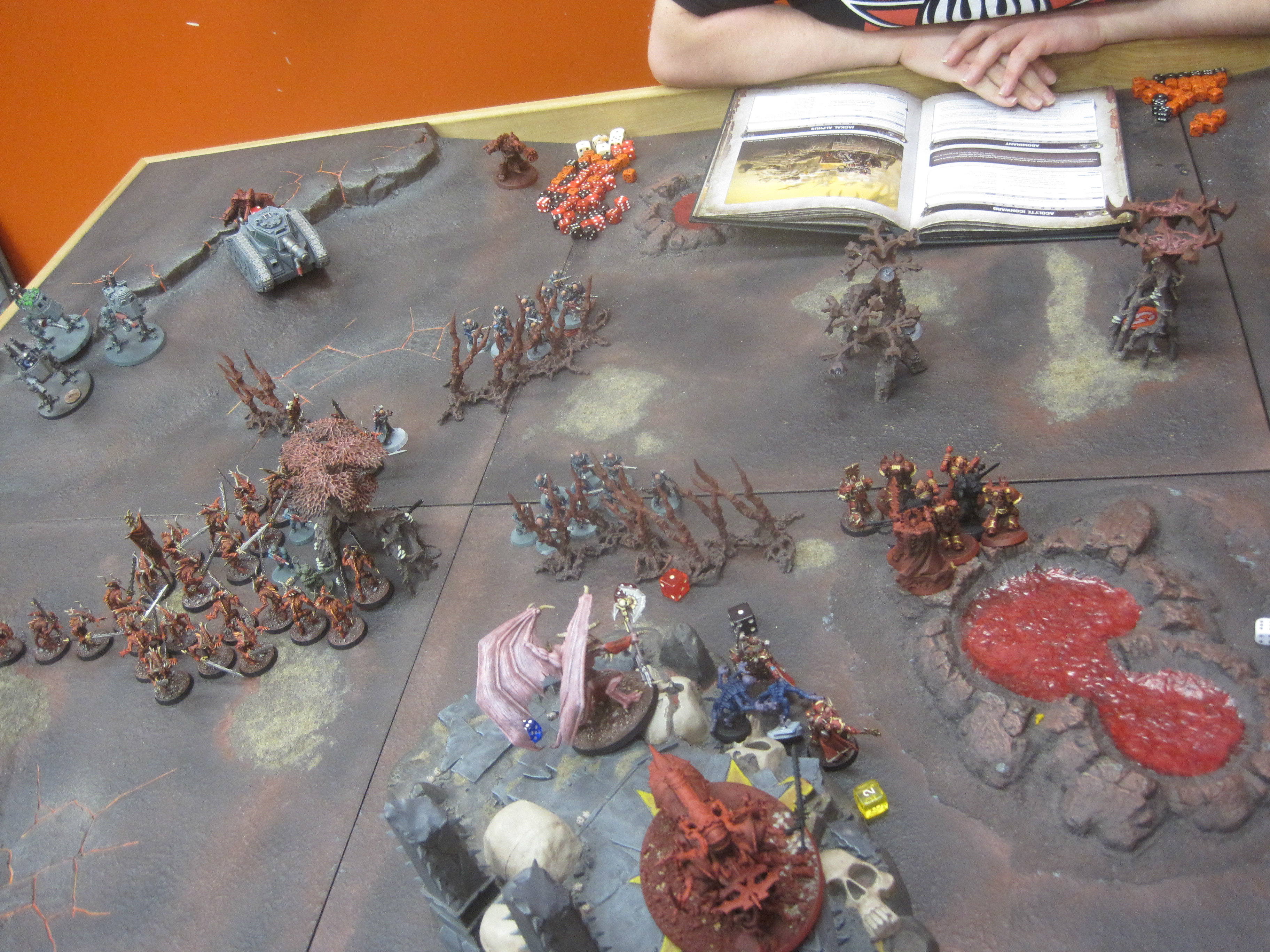 I then brought in my own reserve units, including the bloodletter bomb and some obliterators to tie up his backfield fire support.  The bloodletters proceeded to carve through the centre of the table, while out on the flank, a unit of chaos marines supported by a Lord of Khorne shot up, then chopped up his remaining threats, assisted by the Daemon Prince (who was hanging on by a thread). 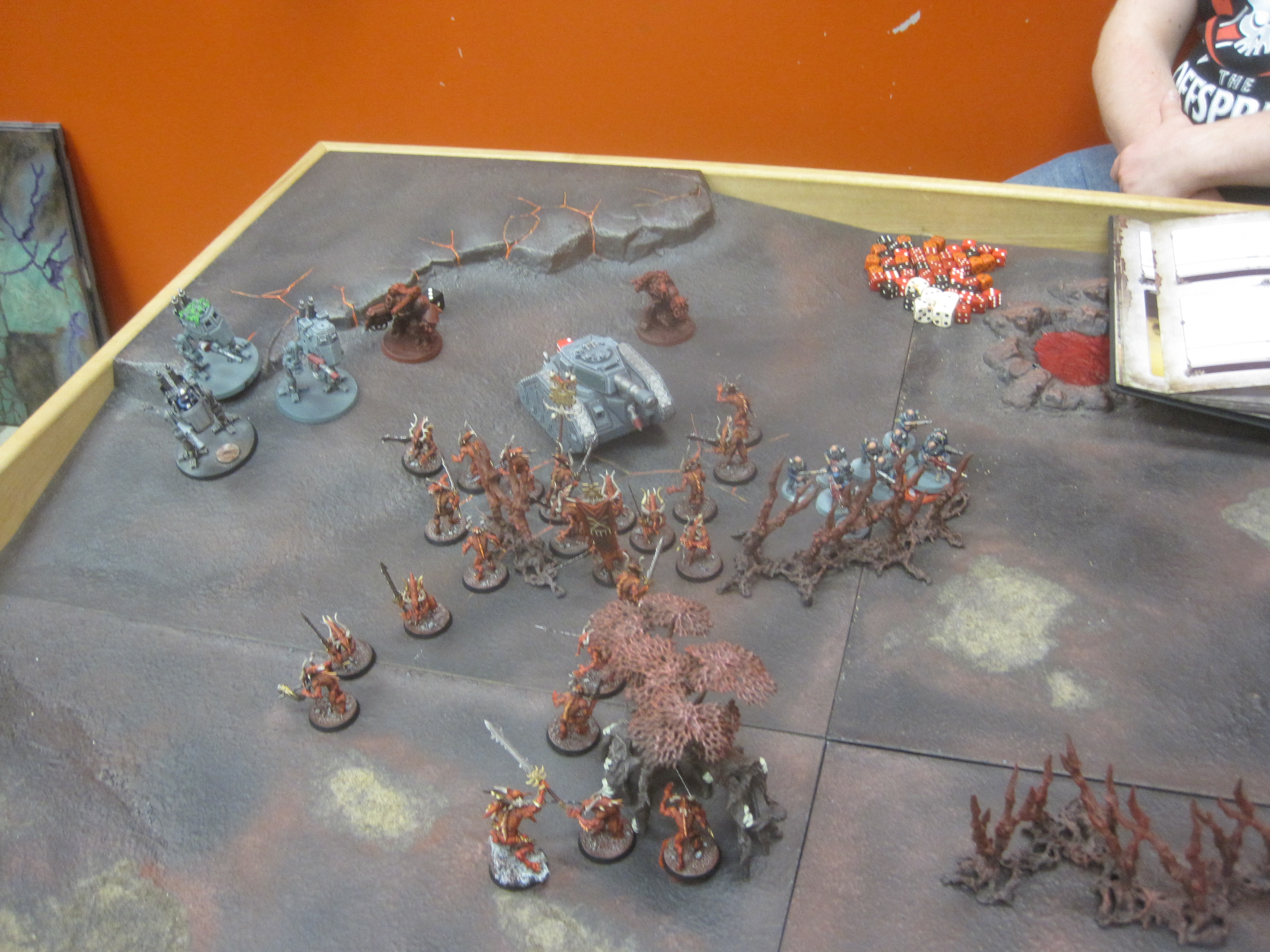 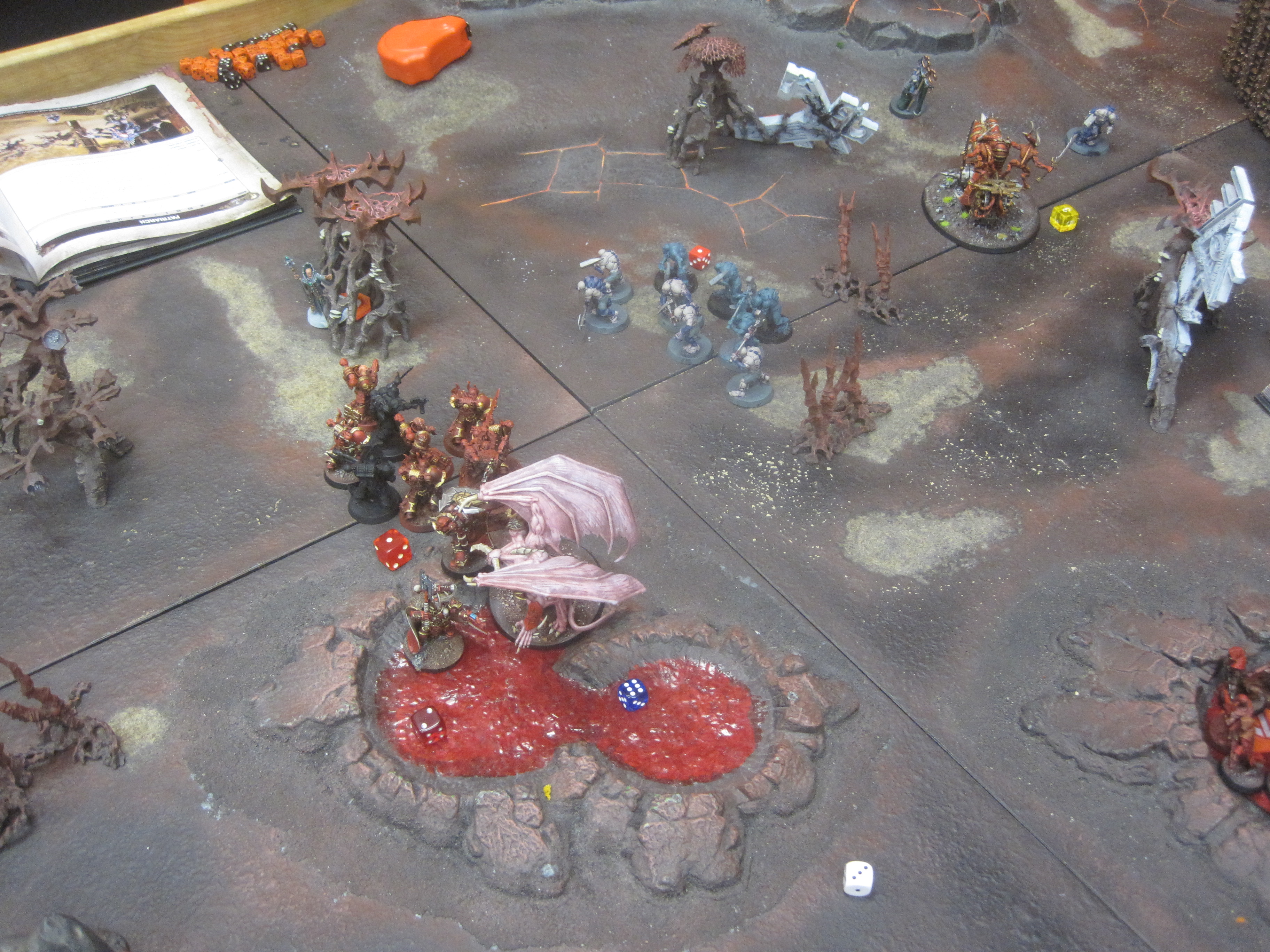 This one we called top of turn 4, but it could have easily gone the other way.  If I hadn't have caught a couple of lucky breaks, or he had better rolls when he needed them, he probably would have taken it.  Even losing my Prince a turn earlier might have done it.  As it was, many skulls were reaped for the Brass Throne, and I suspect a grudge match is in order.

I'd forgotten how much fun "kitchen table" 40k is.  In both these games, we were looking to win, but none of the players brought armies designed to break the game.  Under those circumstances, 40k is still pretty fun ;)

FMB
Posted by fireymonkeyboy at 6:38 PM