Bit of a hectic weekend in Monkeyland, but all good stuff.  The Cub's school had their big, annual Hallowe'en fundraiser, which took up a good chunk of Saturday, and the Fall geek convention, Halcon (which was super fun - got to meet, and have a book signed, by Guy Gavriel Kay), took care of Sunday.  Despite all the hustle and bustle, Cub and I managed to get in the inaugural 40k game at our new digs. 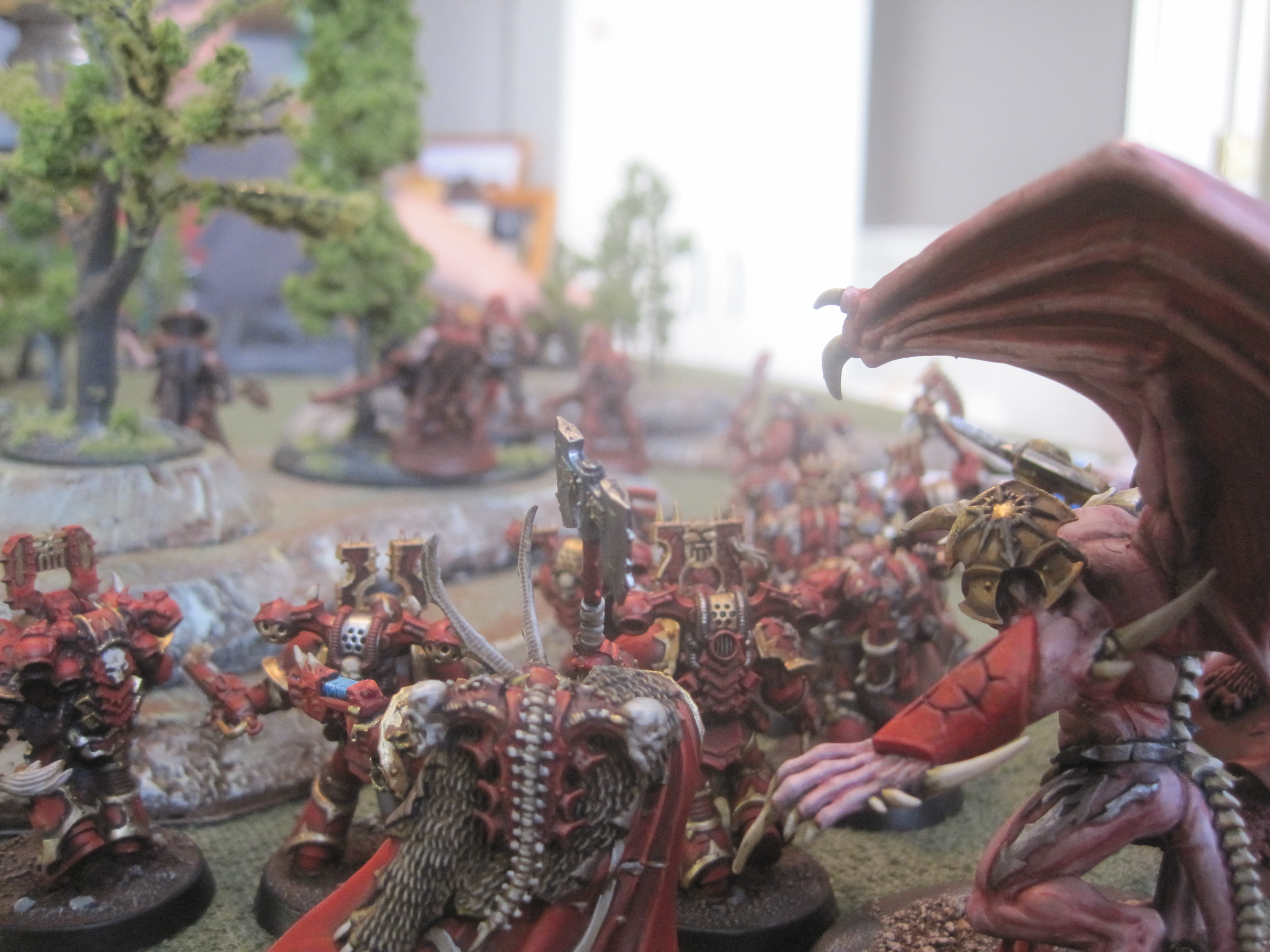 We played a 50 PL game, his Salamanders vs. my mixed Khorne (World Eaters + Daemons).  We both went infantry heavy, with the Sallies fielding 2 full tac squads and some Primaris, along with Vulcan, a librarian, and a Contemptor dreadnaught.  I brought a maxed unit of bloodletters, 2x10 cultists, some berzerkers, and a mix of characters (DP, Lord, Dark Apostle, Champ, and Bloodmaster).  The Champ was pretty much filler - probably would have done better to add another 10 cultists as meatshields.  I was pretty stoked to try out a new artifact, Skullreaver, which amps up the Demon Prince to pretty ridiculous levels. 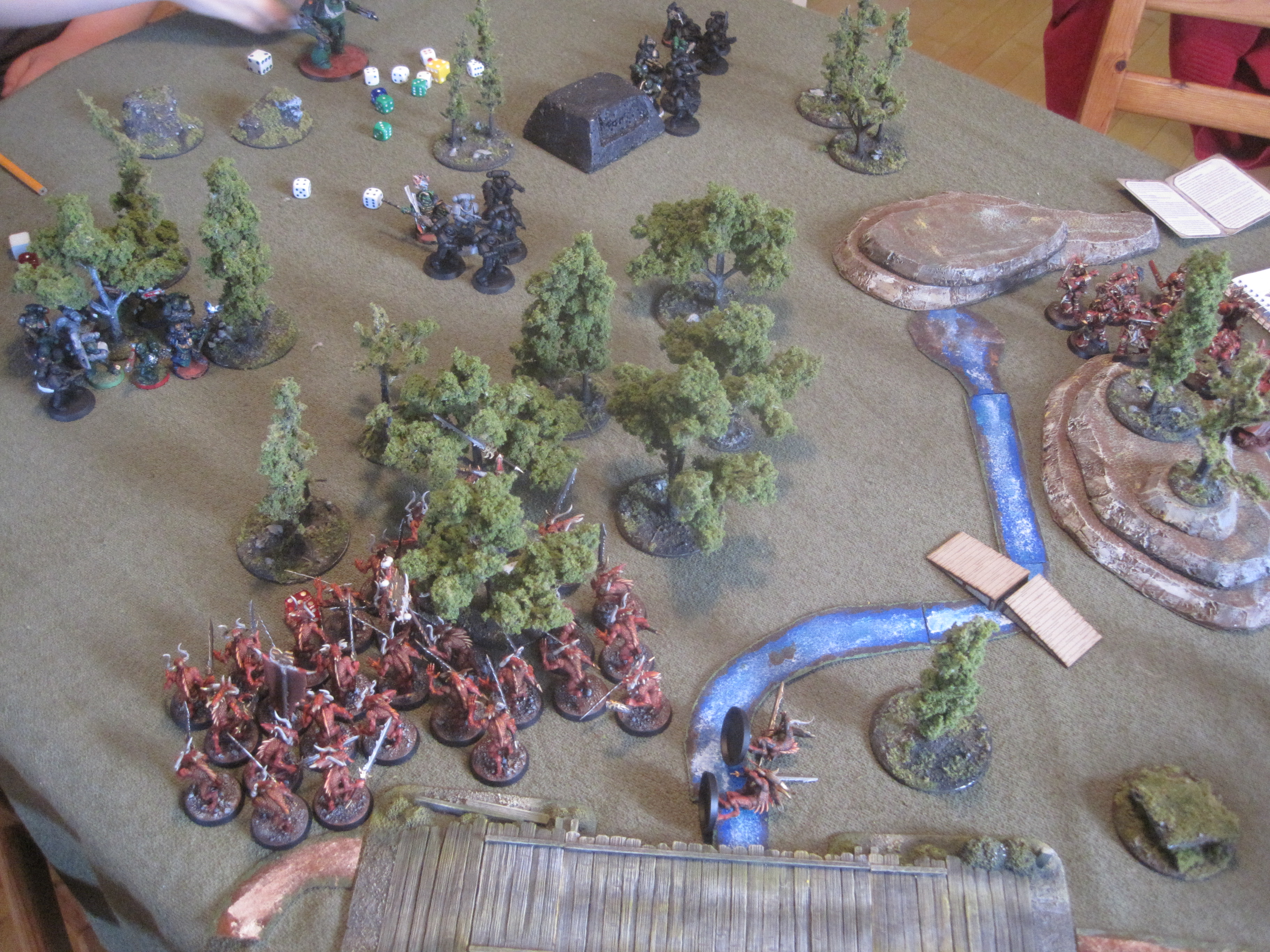 We used the Open War cards, which I still think are the best accessory GW has put out in ages.  Scenario had a "long" deployment (we were on the short table edges for deployment), with a random, game winning objective to be determined part way through the game.  It put a premium on board control (interesting given the small size of the game).  I used some of my CP to put the Bloodletters and Bloodmaster into reserve (via the warp), and gave the former the banner that makes charging the turn they arrive much more reliable. 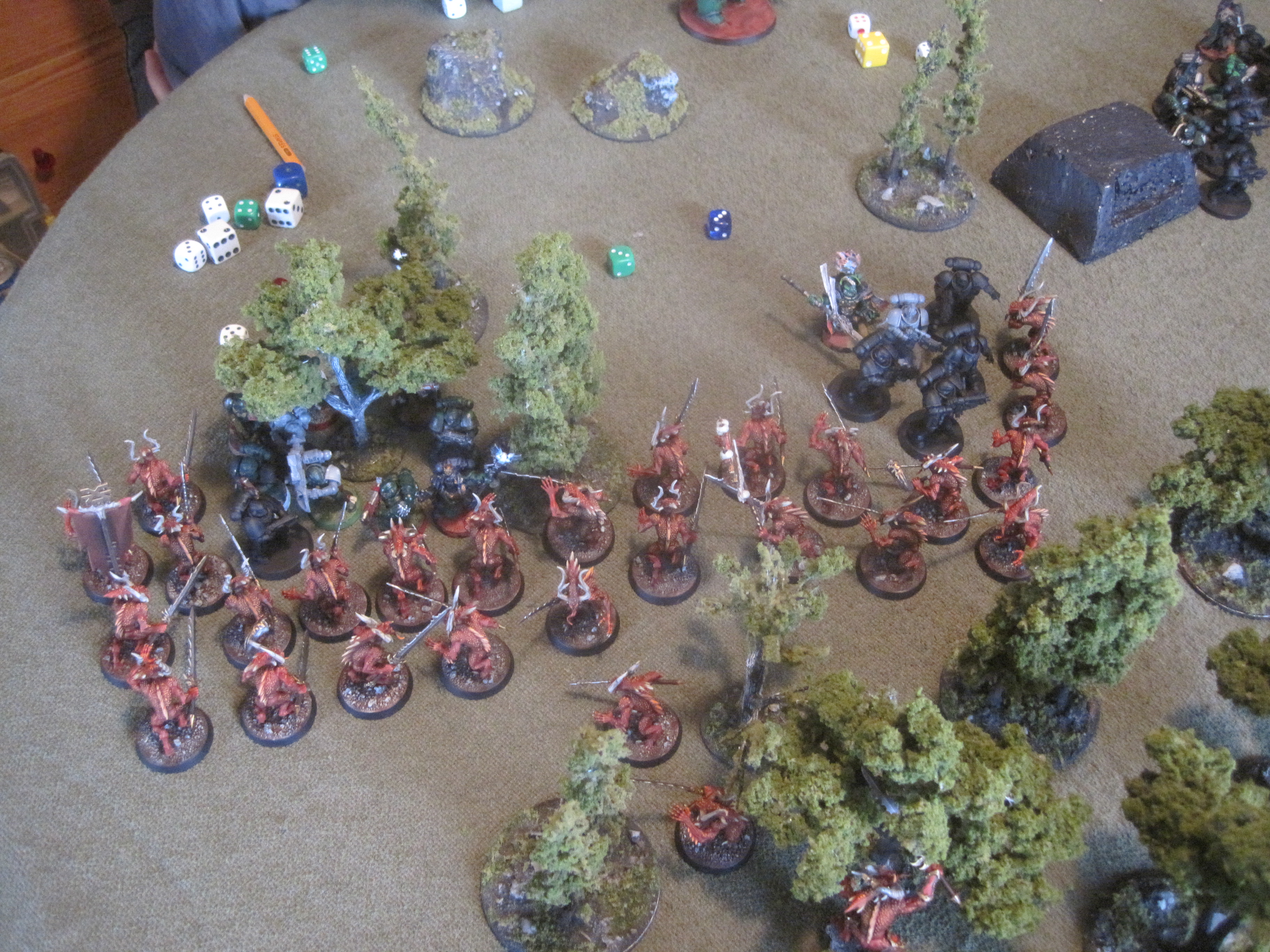 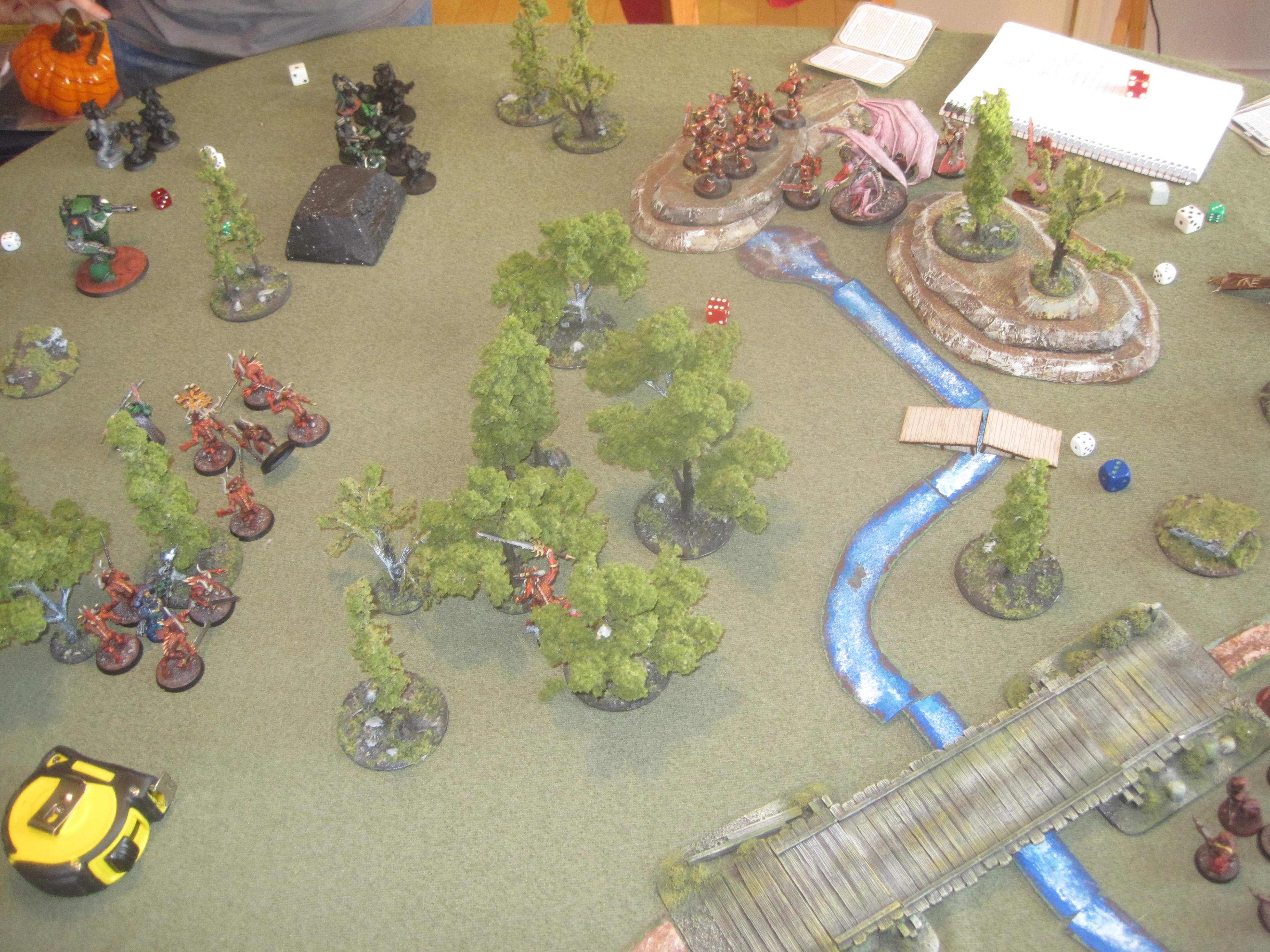 Much of the game activity took place on the two flanks.  I put my berzerkers and most of the characters on the right, behind some cultists, and stuck the other cultist unit fairly far back on the left.  With the bloodletters bursting on the scene end of my turn one (after the Cub blasted one of the cultist units off the table), the pressure was on.  Despite managing to do some serious damage on my right (massed bolters knocked out my Berzerkers before they could engage), the bloodletter bomb tore apart two of Cub's units before bogging down most of his remaining stuff in combat.  Turn three, the objective came down on my side of the table, and there was no way the Cub could extricate what he had left to get over and challenge for control in time. 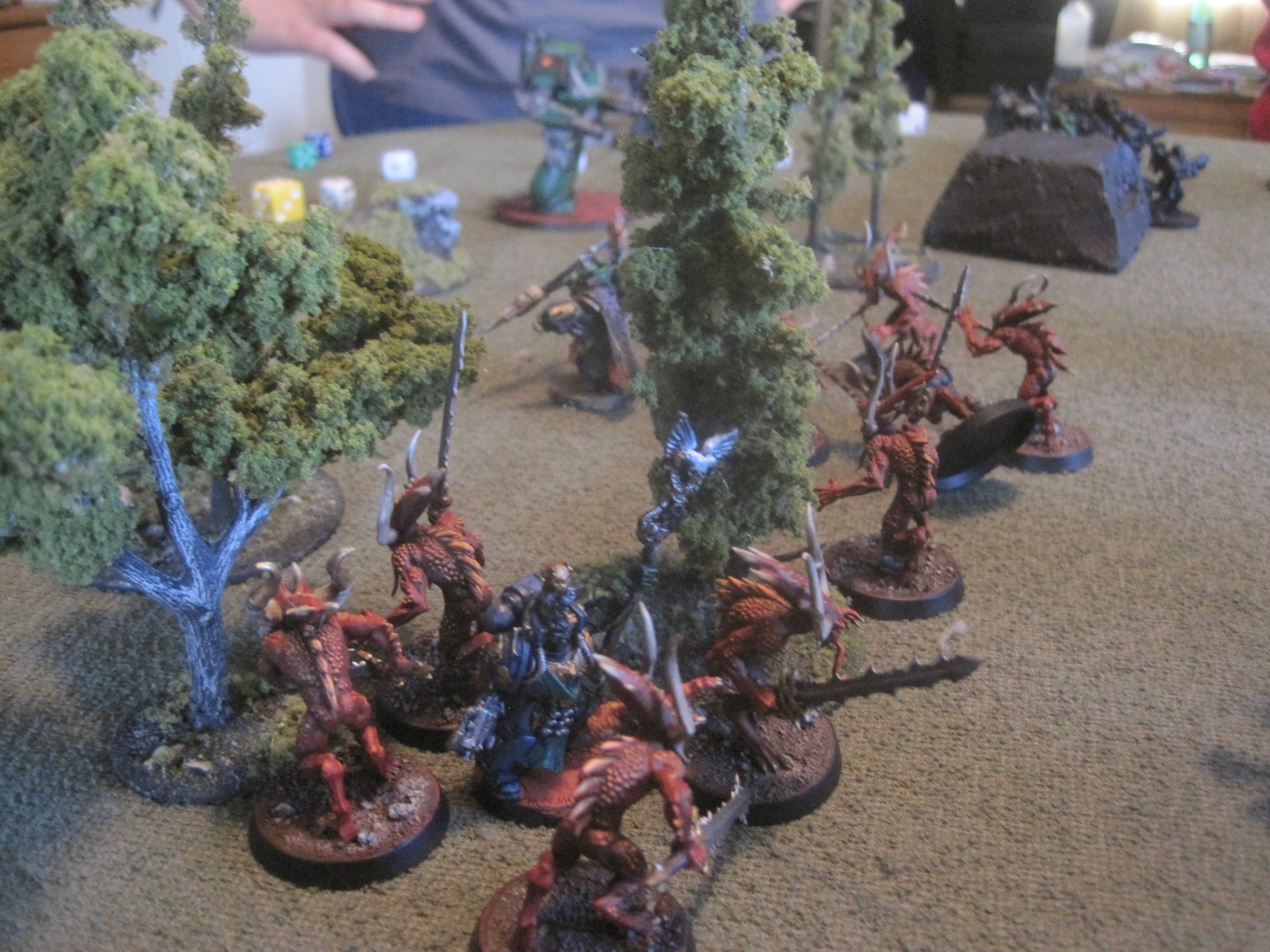 The axe was super-fun, and the bloodletters did what they usually do if you get them into combat relatively safely.  I think what the army really needs is a) more berzerkers) and b) some transports, probably rhinos, to get them to combat faster.  Against any kind of competitive army, I'm likely to struggle (in that I'm pretty much literally bringing a knife to a gunfight), but any game where my guys contact the enemy is a fun one.


Posted by fireymonkeyboy at 3:38 PM