Things are proceeding slowly in Monkeyland, but they are proceeding.  The puppy is settling in, work and school have resumed, and while I don't have a ton of time for painting and playing (and haven't been able to get down to the shop to play), all is not lost.  I have been trying to carve out at least a little bit of time most days (even if it's 20 minutes) to pick away at some miniatures, and the Cub and I were able to get in a short game before he went back to his mom's post Christmas holiday. 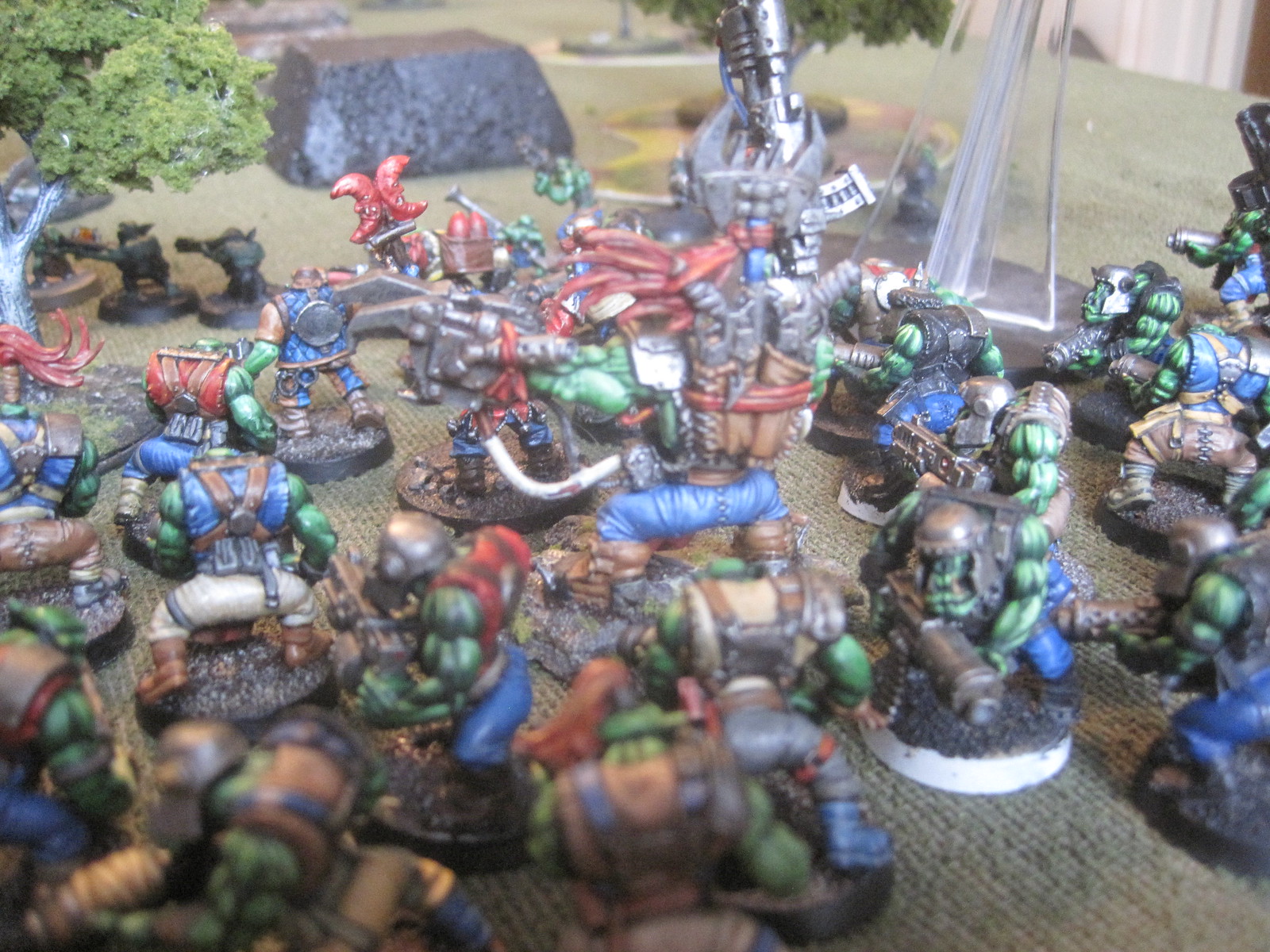 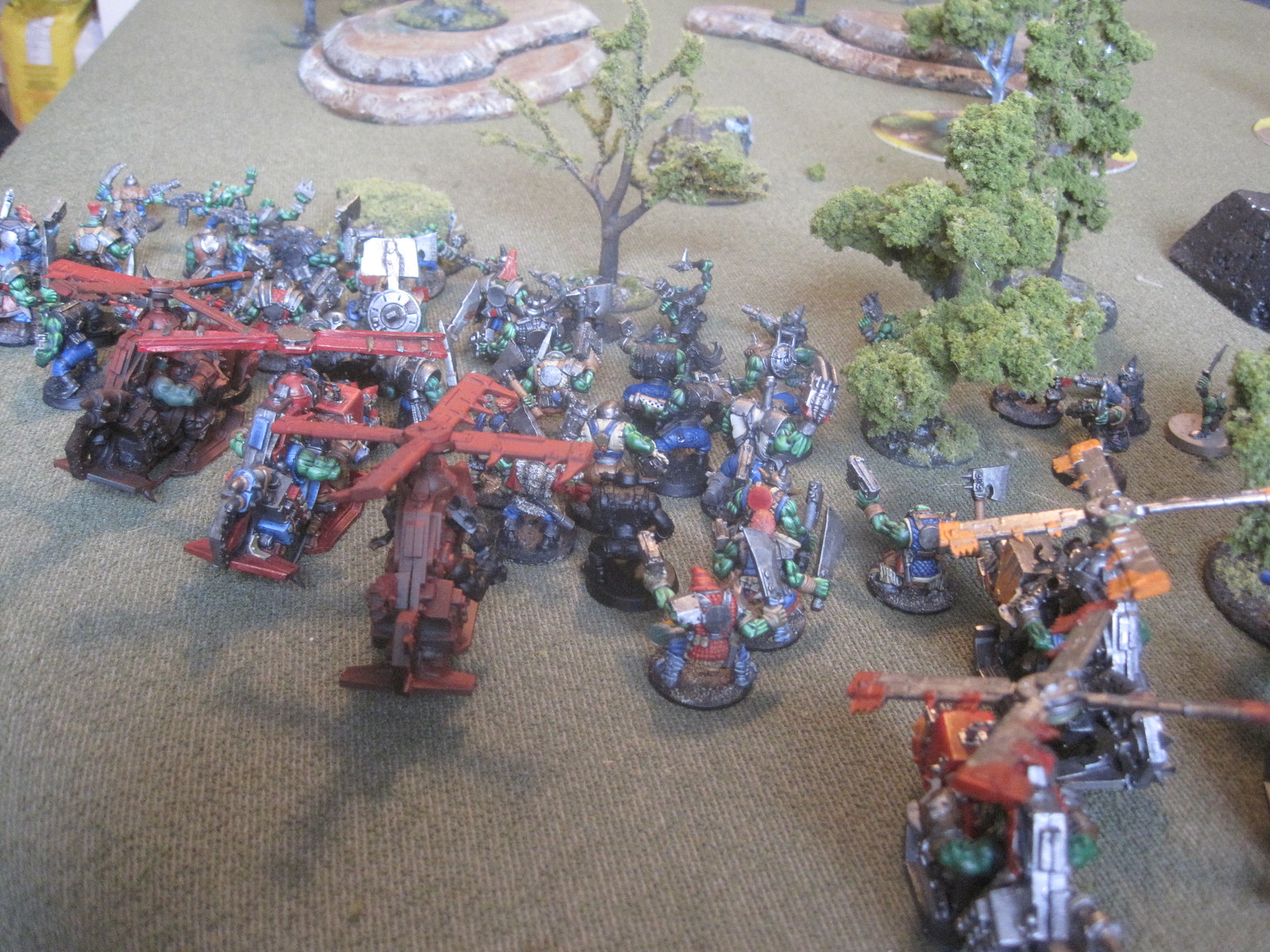 I actually got my orks on the table for the first time in who knows how long (seems like at least a year).  I hit something of a wall with them a while back, both for painting and playing, but of late have been feeling the urge. Didn't regret it, either ;) 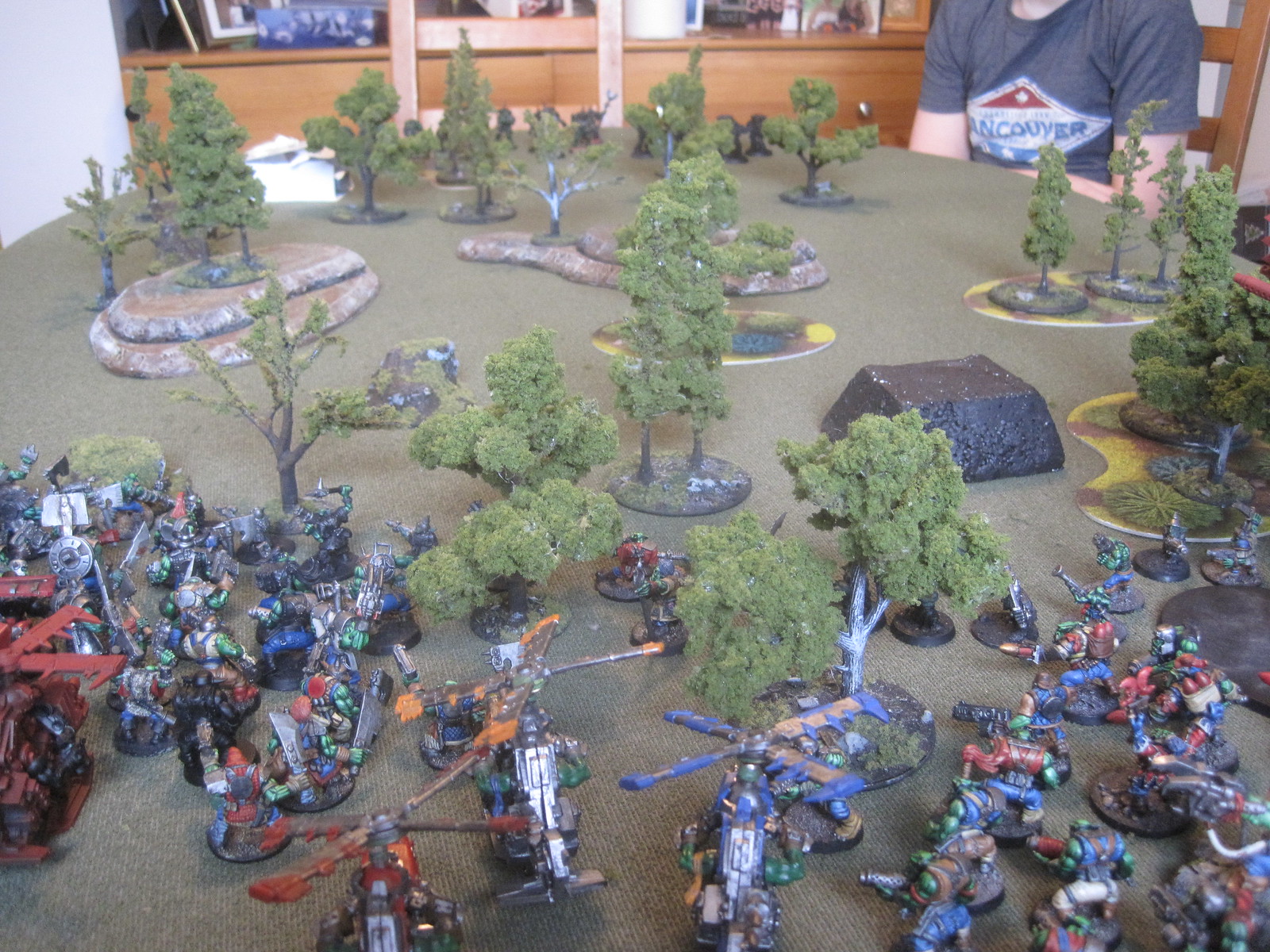 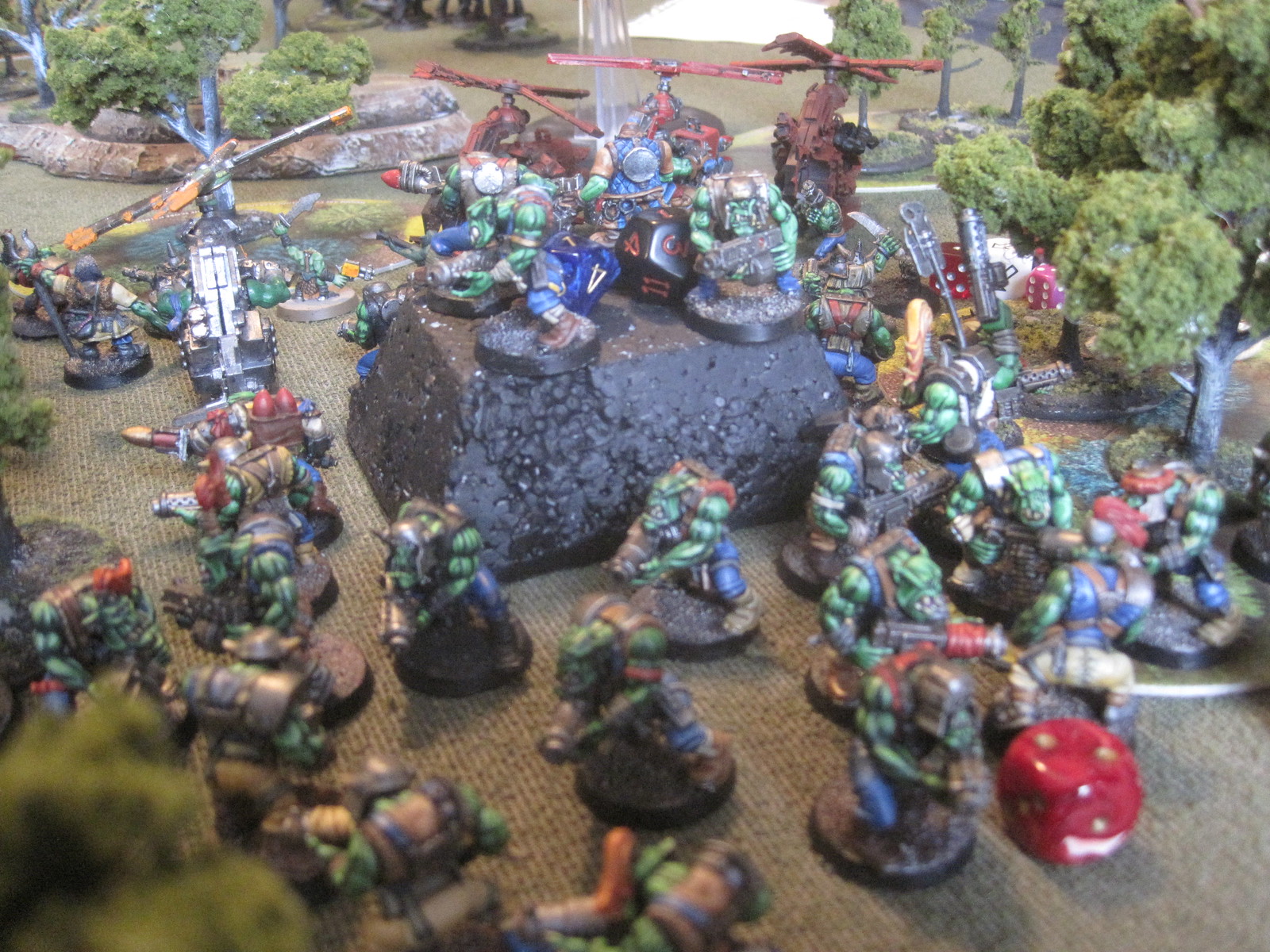 We played a pretty stripped-down scenario.  Three objectives, whoever controlled the most won the game.  I took it, but I think mainly due to the small table we play on.  It means the Cub, who has a mainly shooting army, doesn't have long before my guys (whether Khorne or Orks) get into close combat.  That gives me a decided advantage.  Unless I play sloppy, and he gets in a couple of chump shots, it gives me an edge.  Might have to look into rigging a full 6x4 table, though I suspect that's more of a summer project. 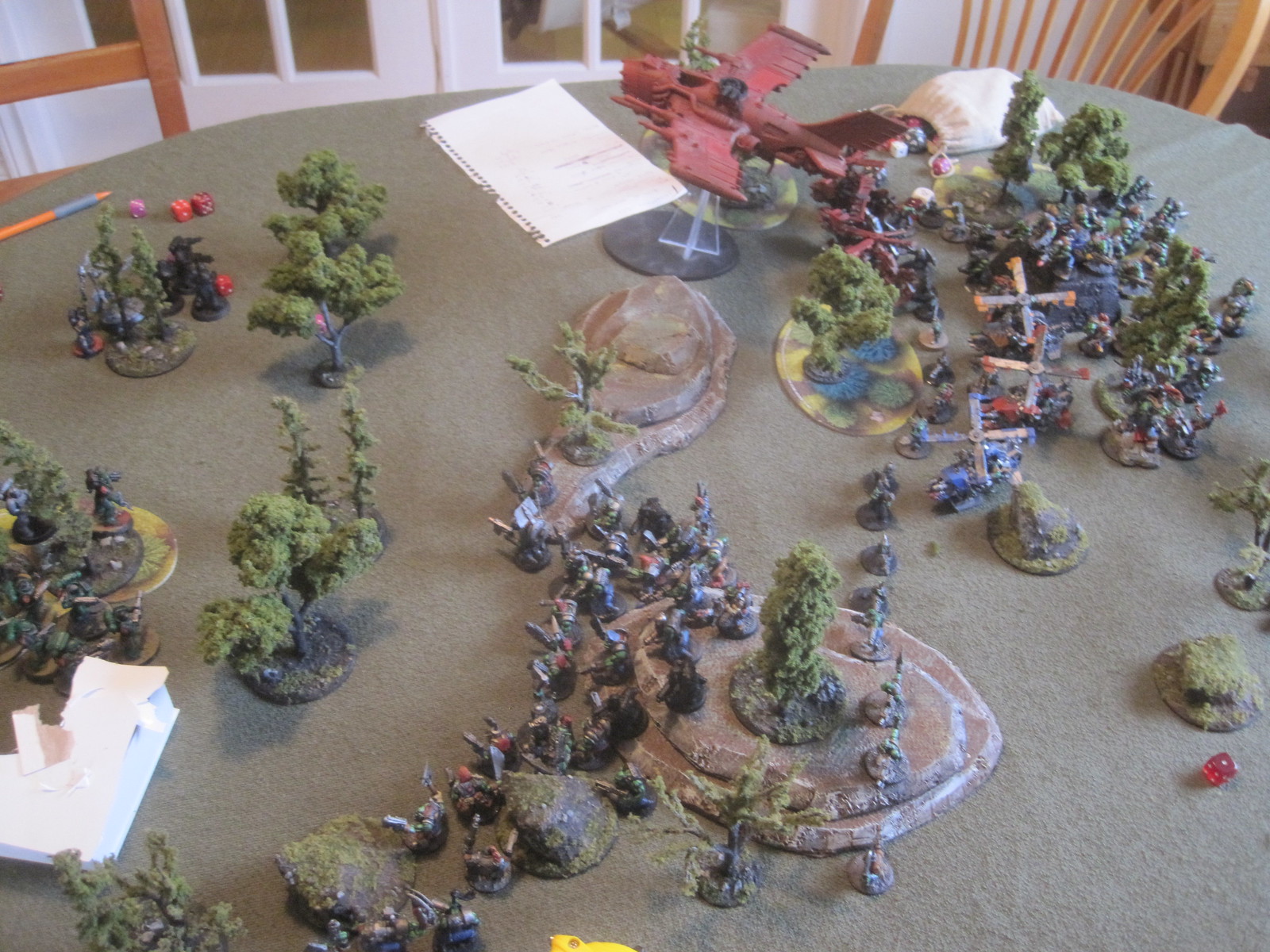 I've been reading a fair bit of New Year's posts from people, along with the usual resolutions to paint more, play more, and paint minis before buying minis.  I'd like to resolve that I will paint all my unpainted stuff before buying more, but who am I kidding?  I do think I'll likely buy less this year, as I have a heck of a backlog of stuff I would like to paint and get on the table.  I think it's reasonable to aim to paint more than I buy, and will at least try to use that as a guideline for the next while. That said, I have a few MESBG figures close to finished (Eomer and some Galadhrim), as well as some historicals.  If I manage to keep picking away, I should have some painting posts for the next couple weeks.  By then, things might settle down enough that I even get out for a game.

Posted by fireymonkeyboy at 5:05 PM