As I think I've mentioned, one of the local historical crew (although, by this point, I suppose I am one of the local historical crew) and I have been corresponding for a bit, looking for possible projects during and after the plague, and decided on DBA.  It's a relatively simple game to play "virtually", and can serve as a possible springboard to a larger post-covid project (like Art de la Guerre).  We've managed a couple of online sessions, and in the last one, Jura was able to take some pictures.

The first game was basically a story of my right, made up of Auxilia, using their speed and mobility in terrain to envelope his flank.  This pushed him into an aggressive rush in the centre. 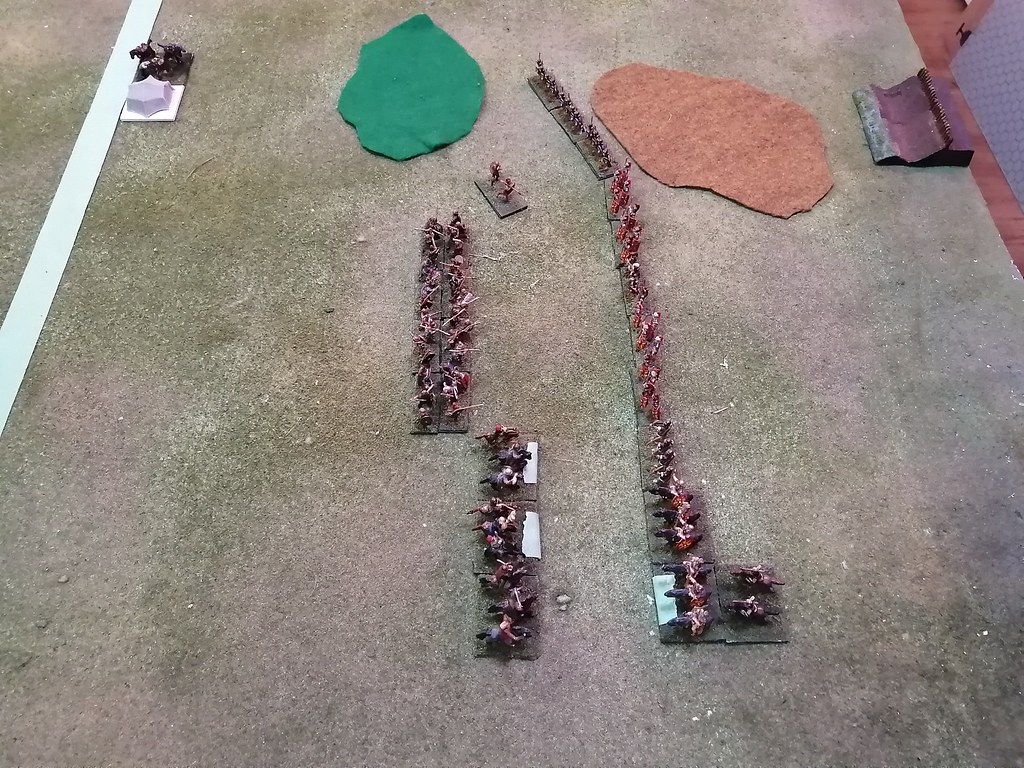 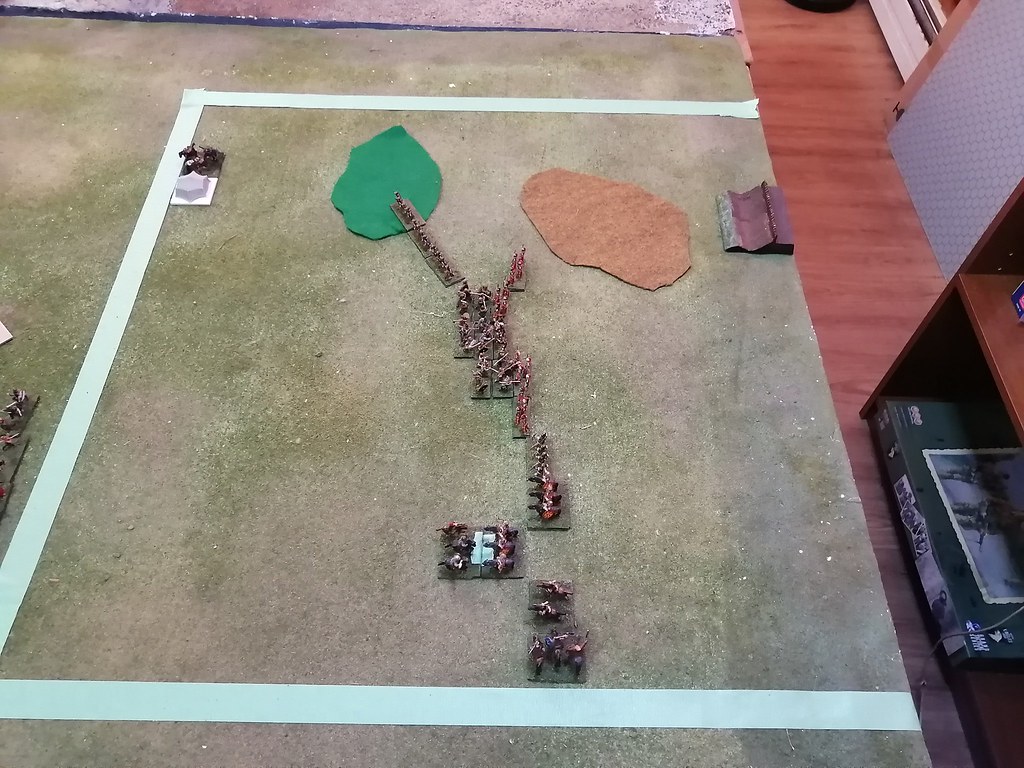 A bit of luck in the cavalry engagement on my left, the loss of his screen on my right, and a few fights that went my way in the centre clash, and I had the first game.
Second game, we decided on trying out a river, which naturally was revealed to be the most difficult kind.  As it ran down the centre of the table, it pretty much defined the game, as it meant that anyone who tried to cross would end up doing it piecemeal.
I think I deployed reasonably well in this one, using my one bow element in the centre, as a hinge between my Blades and Auxilia.  Ranged fire consistently drove back units in the middle of the opposing line, breaking him up even more, and I think contributing to the German difficulty in coordinating an attack (although abysmal PIP rolls by my opponent also helped!). 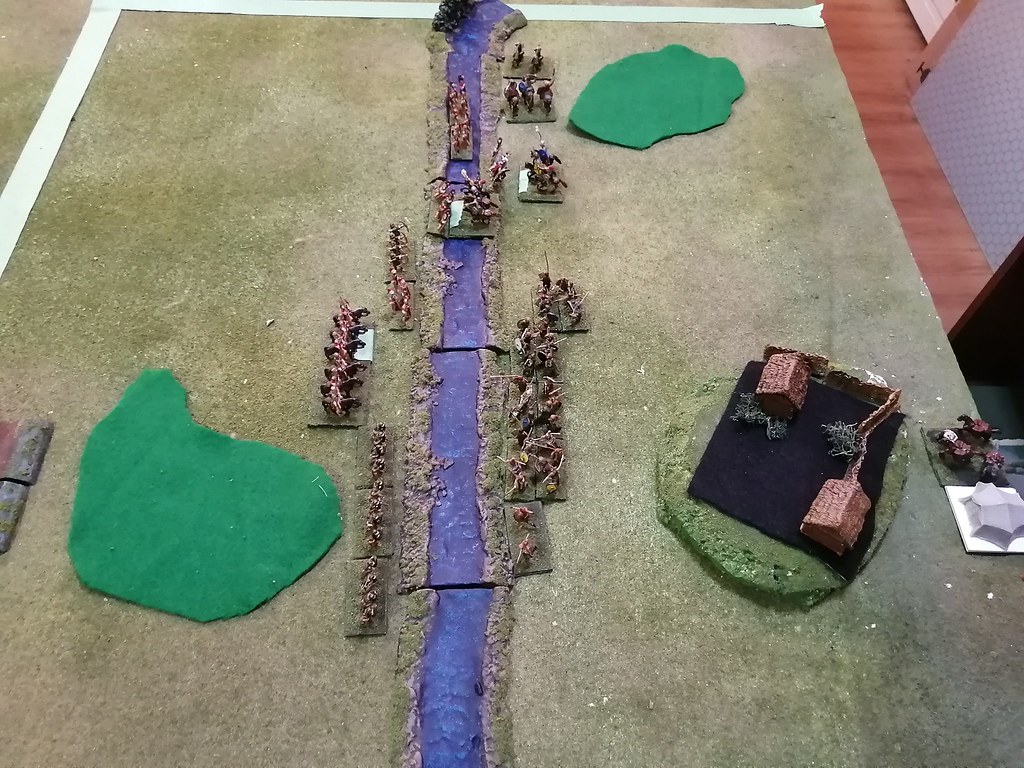 I managed to get some cavalry across on the flank, and envelope him. 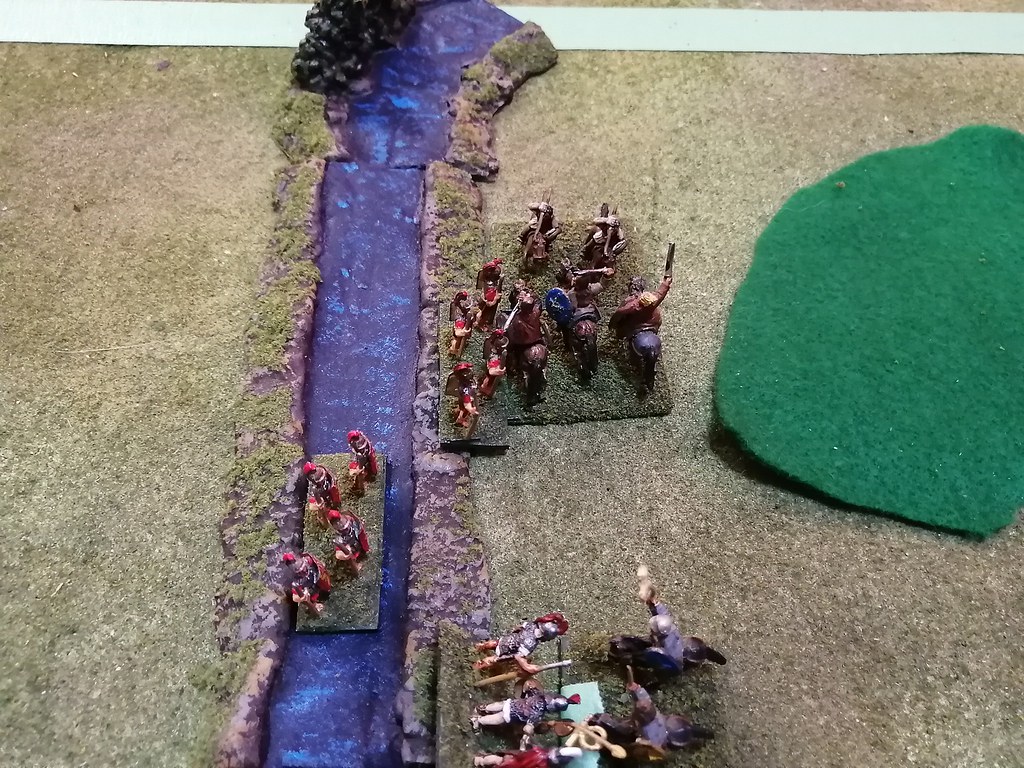 And the one real chance he'd had, to take out my general's unit (which I'd left exposed, partly on purpose, and partly as a result of combat), didn't pan out. 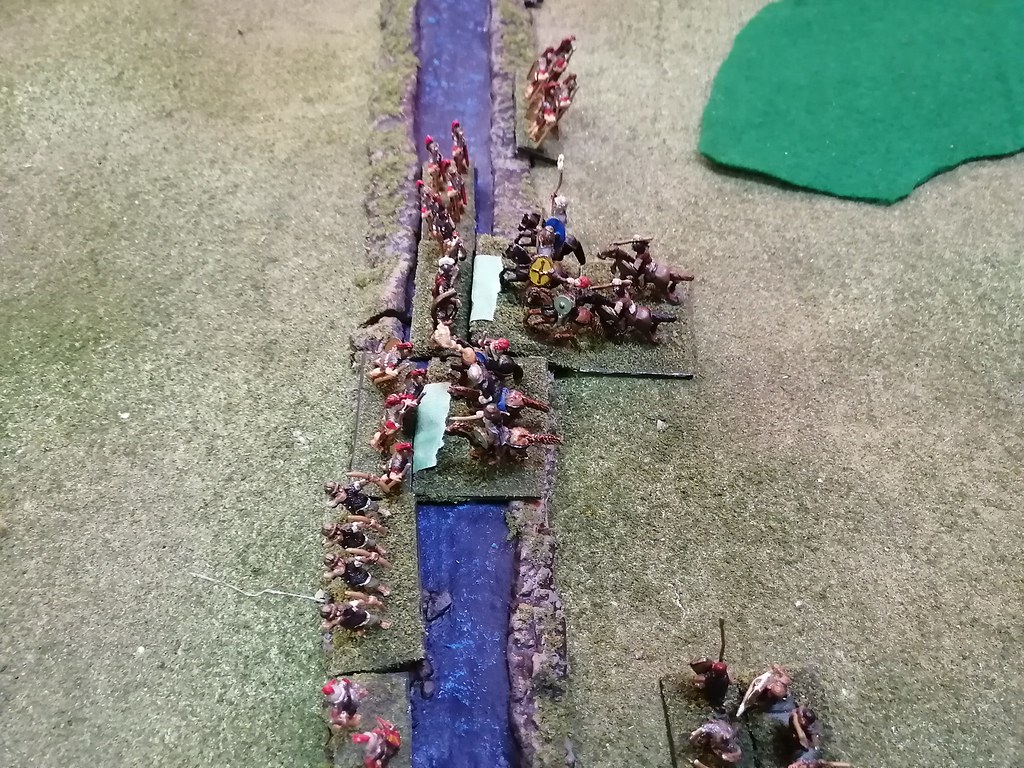 With him pinned down in the centre, his flank collapsing, and his left unable to cross, the Romans took it again.
I've quite enjoyed the two sessions we've played so far.  Jura's been kind enough to set up the table, and make his armies available for play.  The games, predictably, have me inspired to paint, and I've made progress on the Ayyubids for the first time in years.  I've also been eyeing my Antigonid successors, and some unpainted Achaemenids, as possible rebasing / painting fodder for DBA.  It'd be nice to be able to return the favour.
Longer term, I've been hearing good things about AdlG from my Toronto crew, who seem to have adopted it as the current ancients club game.  It would be nice to have something to play once all this craziness wraps up, and a slow-grow project fits in nicely with the pile of other stuff I want to do (plus, you know, life, work, and family).  I have enough Ayyubids for a DBA list, and certainly have enough Persians and successors to work towards AdlG lists.
The one thing I'm wavering on is my Spartans.  I really like this army, primarily as a hobby project (love the Xyston hoplites, and even the old glory figs I'm using for some elements are pretty great), but have consistently been basing them for Impetus.  I quite like the latter game, but it has zero traction around here.  DBx basing is compatible with Impetus (with 4 DBx bases making up one Impetus unit), but pretty much gives up the "element" basing approach that is much of the hobby appeal of Impetus for me.
Of course, the easiest solution would be to try and promote Impetus locally.  Jura's indicated some interest, but I'd likely need to supply figs.  I could, of course, paint up some opponents for the Spartans (early persians, maybe, or athenians, or something), but that would mean buying more figures . . .
Posted by fireymonkeyboy at 9:40 AM