Listing to the left

Soviets are chugging along, basically need to pick out some details and do the basing and I'm finished the second batch of infantry (the ones that'll take me from 500 to 1000 points).  Next step is to finish up a couple of vehicles (a T-34/76 and a looted Maultier half-track), and then re-base my mounted cossacks. 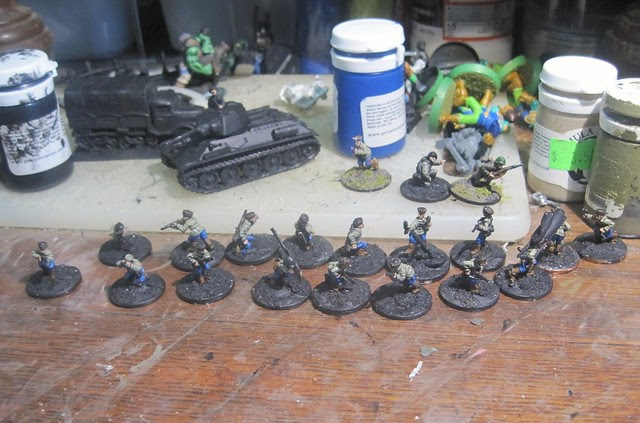 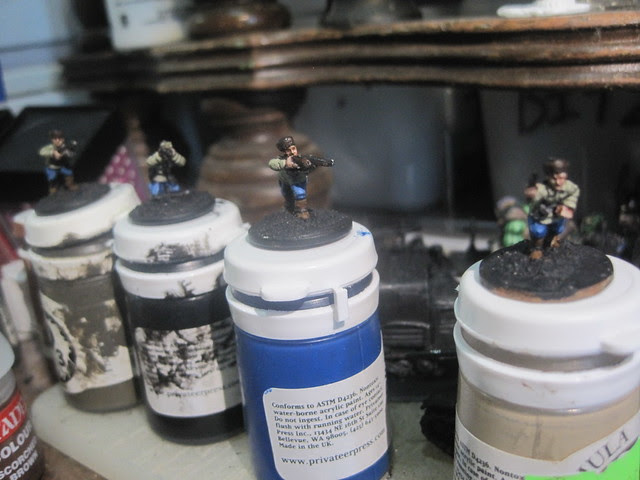 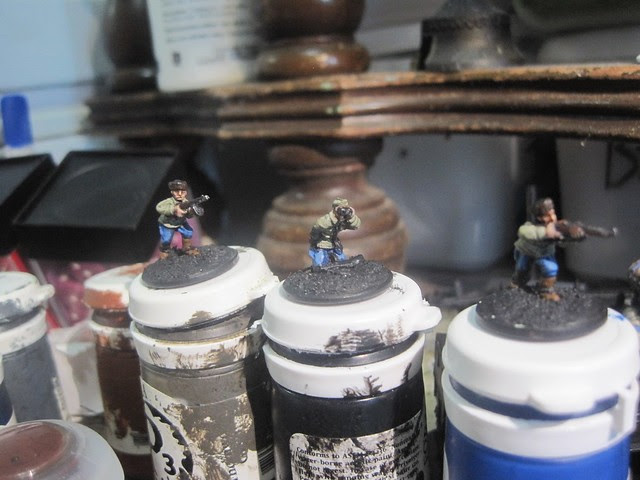 Next couple weeks are looking a tad iffy for games.  I'm likely not going to make it down to DG this Wednesday (a prior committment interferes), and with Kegscon coming up soon, most of the club is getting drawn into the Ronin demo game.  I might take a spin at that in a couple weeks (as one of a set of "so, how do you play this game?" playtesters), but all this collective effort is getting in the way of my suddenly resurgent enthusiasm for Bolt Action.


Having had a week or so to peruse the Soviet book, I've been spending some time in the kitchen, cooking lists.  As it turns out, the more or less balanced list I'd been building towards offers a fair bit of opportunity for tweaking.  What I've been working on so far is this, with modifications for the new "base list" in the Soviet book:

This gives me a good base of troops for fire and manouevre, a vet squad for assaults, a disposable free squad, decent mobility, a good all-round tank, and some ranged pinning threats.  It's been working well against most the opponents I've played so far.

The thing is, the list lends itself to a range of variation.  For example, dropping the T-34 to Regular morale provides exactly enough points to mount the two 9-man cavalry squads, and add an extra SMG.  Now I've got a base of fire with the mortars, PTRD teams, and "foot" squads, and a fairly scary out-flanking component with 2 large mounted squads, the tank, and the vets in the half-track.  While the rules only designate some squads as cavalry, I can just swap in dismounted cossack figs for the vets and green squad, and Bob's yer uncle.

The tank swaps out for a couple of ZiS-3s and aTachanka, if I want some flexible shooting and flavour.  Or I could swap the tank's points plus a mortar for two ZIS-3s and two Katyushas (all inexperienced).  That's a ton of HE heading towards the opponent, driving them towards a base of infantry with some fairly devastating short-range shooting, and the ability to harshly punish anyone who tries to hunker down and weather the storm.


The Soviet book also unpacks a number of other list ideas.  On one of the Facebook BA pages, someone recently posted a link to this, which has me perhaps the teensiest bit excited.  A list with some street fighting militia, assault engineers, hand-propelled guns, etc. is definitely in the offing.  In fact, I've even sat down with some FoW rulebooks (so, how does version 3 work again?), to consider the possibility of my 4th (?5th?) Soviet force for that game.

I suppose it's entirely possible that this is just the latest manifestation of my usual gamer ADD, but one of the things I'm really liking about Bolt Action is that the force sizes are so manageable.  You can cheerfully, and realistically, plan to do lists for multiple theatres and even countries without worrying about saturation, or breaking the bank.  That's something that's not possible (at least for a Magpie devoteee like me) with a larger-scale game like FoW.  Warlord are on to something with this game.


Posted by fireymonkeyboy at 9:56 AM