To start off, I want to announce something of a THMG club project for the upcoming Remembrance Day. The plan is, each of us puts together a single figure or small vignette, between now and Nov. 11th, and then we sell them after Remembrance Day, with proceeds going to the Wounded Warrior fund.  I'm planning on doing a French Napoleonic command stand with 1/72 figures, suitable for Black Powder or something similar.  Blog posts for the next week or so will probably include WiP stuff along with whatever else is going on.  We'll be selling off the various miniatures individually, via a dedicated account.  Stay tuned for details.  There are some really excellent painters in the club, so we're hoping to raise a decent sum.

On a less serious note, I'm still sorting through the various pictures from last weekend.  When we last left off, I'd retired on Friday a happy, if somewhat inebriated man.  Saturday morning wasn't as rough as I probably deserved, but I was definitely searching around for first gear longer than normal.  The fierce competition for bacon, along with prodigious amounts of coffee, managed to rouse me however, and we set out to play a bit of Blood Bowl. 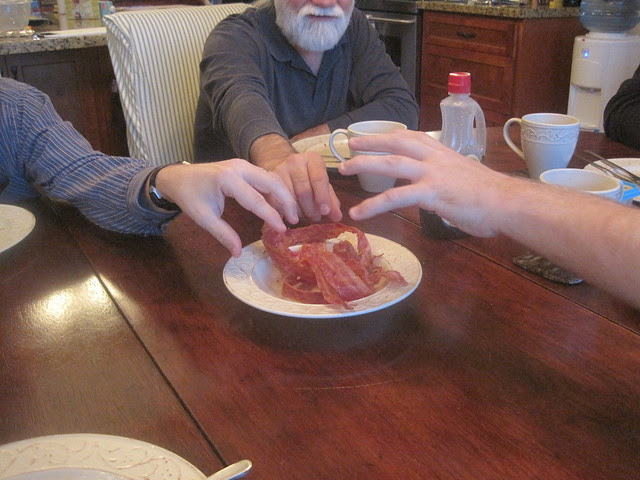 The plan was to play a very limited sort of league over the weekend, starting at a team rating of 1100, which would account for both players and any skill upgrades.  Although I had planned on trying out a couple of new teams, in the end, I opted to stick with humans (I can use all the practice I can get).  I did, however, take the opportunity of the higher team value and "reboot" to include an Ogre on the team, something that turned out to be quite fun.

My first game was against Jack1080, who is notorious in the club for his capacity to steamroller opponents in the game.  He was running a Lizardmen team, the first time I've had a chance to play against them. 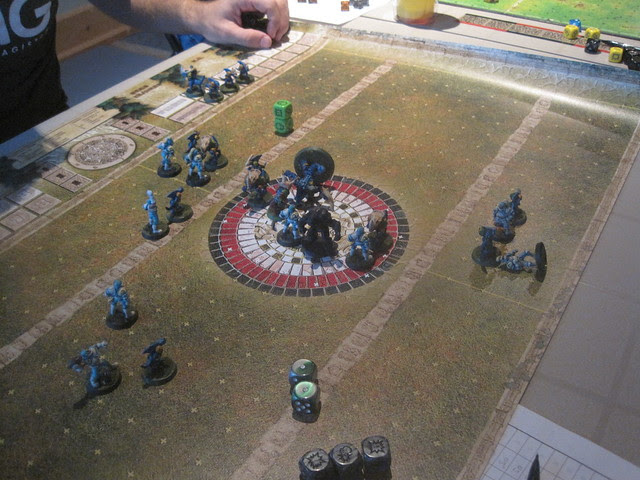 While Jack1080 is terrifically good company, and and excellent sportsman, he is also an experienced, savage ,and ruthless opponent on the pitch.  I went into the game expecting to have him clean my clock. 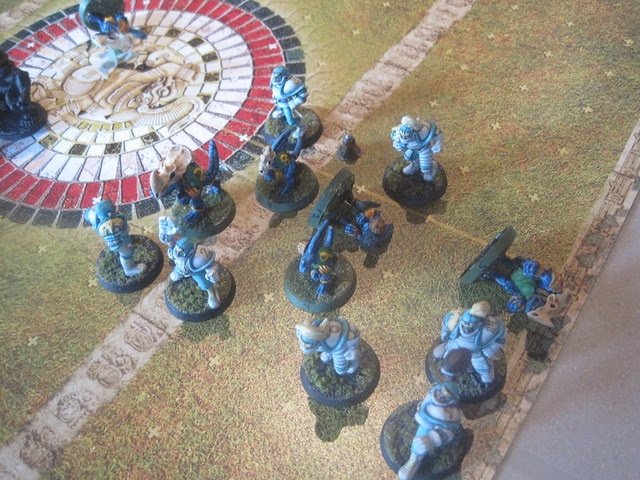 As it happened, Nuffle smiled upon me (perhaps because I had a fully painted 11 for the first time?), and my usual approach of "do crazy crap a more experienced player would never try, trusting to a ridiculous number of re-rolls to see me though" worked surprising well. 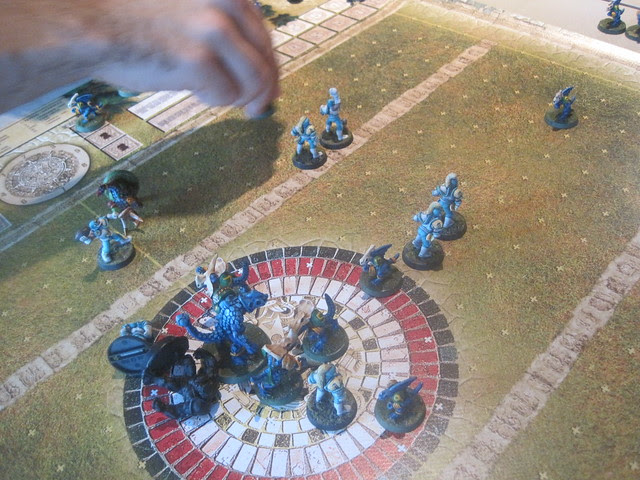 In the end, I manged to beat him 2 or 3 to 1.  It was mostly dumb luck, as Jack1080's hands down the better player, but I did my best to put into practice what I've learned playing the game to date.  The ogre was a blast to play, giving me some serious beef on the line for the first time.  While he mainly served to help counter the Kroxigor Jack1080 ran, there were a couple of satisfying moments where he hammered a Saurus into the ground like a 10-penny nail.  Big guy's due a paint job, first chance I get. 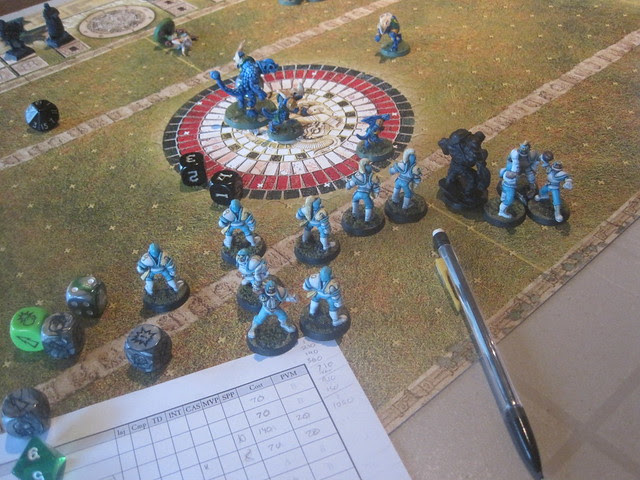 Game 2 was against marke's circus goblins (more pics here and here).  Sadly, Nuffle was not as pleased this game as last.  The first half was pretty entertaining, as marke revealed a series of goblin tricks, and I pushed my luck a wee bit too far.  Twice.  Resulting in turn-overs and a goblin goal each time. 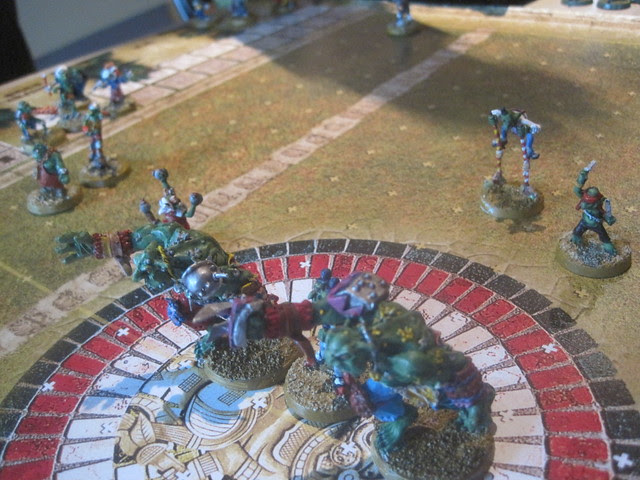 For all that the goblins lack a passing game and are stunty, they're surprising effective.  They can gang up on bigger opponents (like I do with humans), and the double trolls plus special rules that they bring to the table gives them not-insignificant situational power. 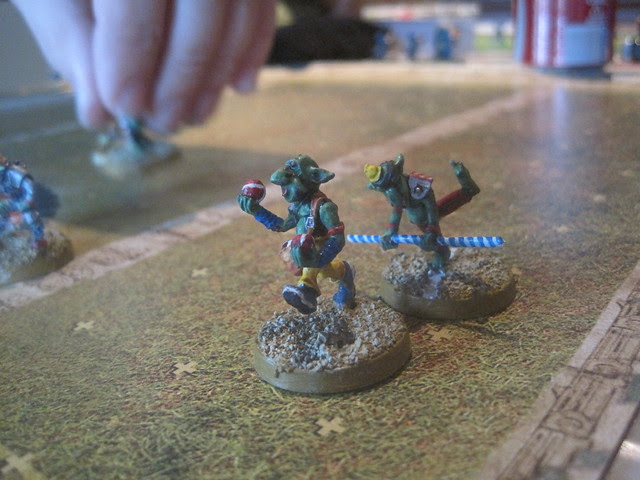 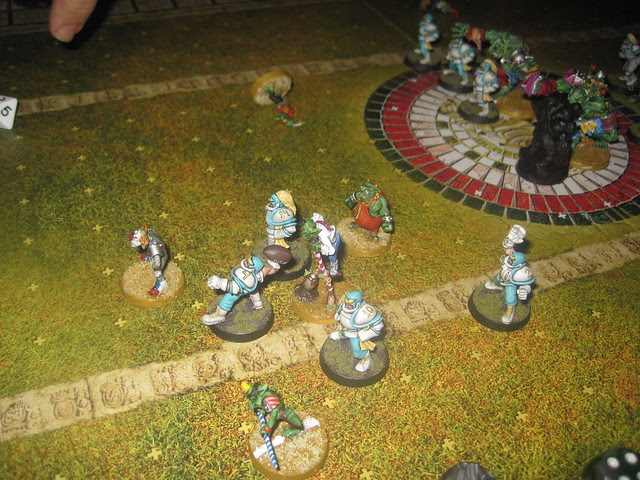 If the first half was amusing, the second half took the wind right out of my sails.  marke set up for the second half with both trolls, a chainsaw, and a fanatic (the whirlagig thing).  The sheer concentration of force completely overwhelmed my hapless humans, who ended up with half the team in the KO box. 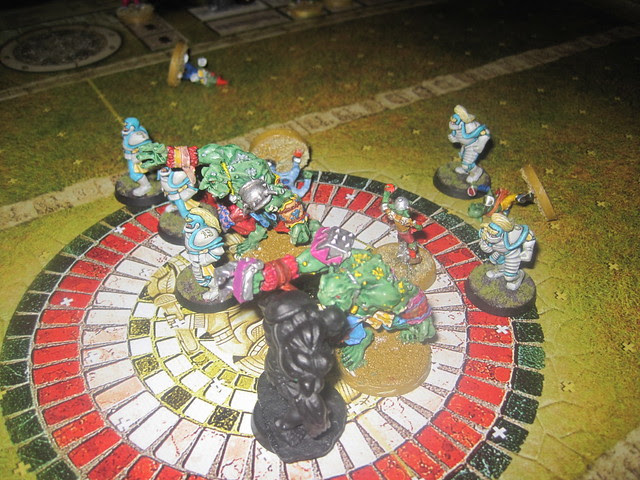 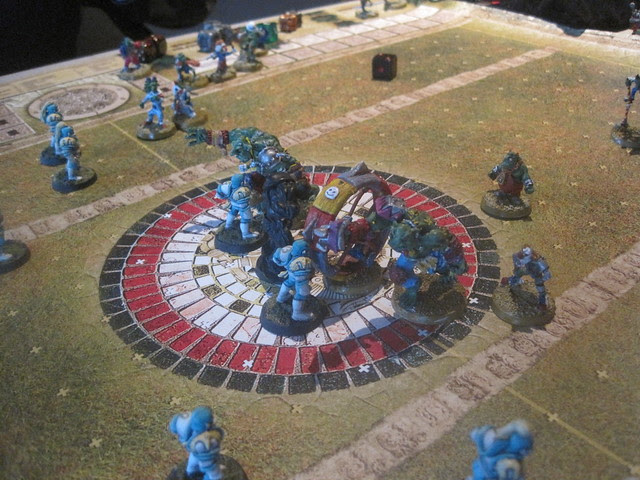 When my ogre went down to the fanatic, there wasn't much left with which I could counter, and I watched in mounting horror as my plucky players were swarmed by a horde of smelly green ankle-biters. 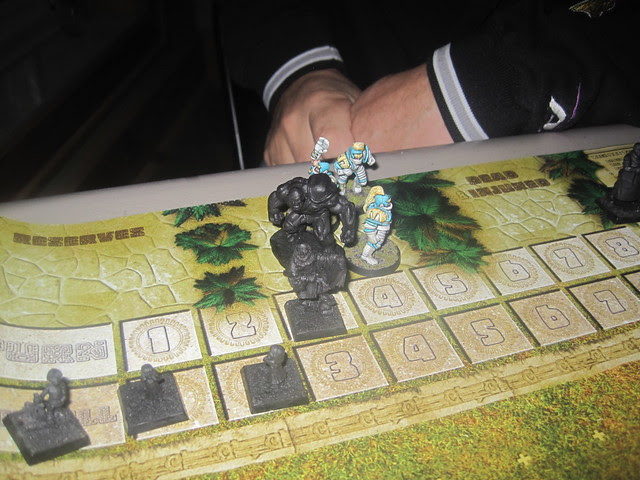 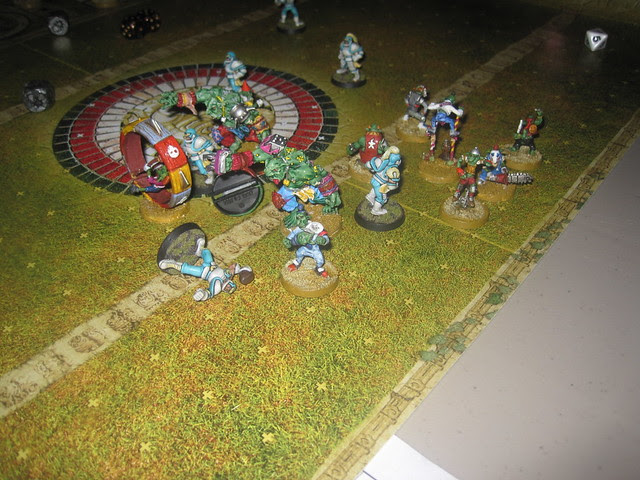 Final score was something like 3:0 for the goblins.  Oh, the shame ;)

While a few of us napped, and Jack1080 and marke played their semi-final game for the regular league (Jack1080 won, his Skaven will face off against DaveB's orks), I got in a game of C&C Napoleonics.  I've been eager to try these for a while, they seem well represented on the blog-o-sphere.  I didn't get any pictures, sadly, but my main impression was surprise at how quickly the game resolved.  I played against ernieR, in I think the Rollica scenario.  Attacked on the left, got my cavalry in behind his right, but he pushed hard in the centre and broke me.  Fun, light, and I can see the appeal for a conversion to miniatures.

In the evening, we broke out Zombicide again, and once again, I took up the role of the Law.  After one game that resolved rather quickly (and successfully), ernieR had the notion of playing one of the larger scenarios that require the use of a car, only without the car.  It seemed like a good idea at the time, but once we hit yellow (which we did a little more quickly than anticipated, thanks marke ;) ), things got a little out of hand.

Ash went down fighting, surrounded by a horde . . 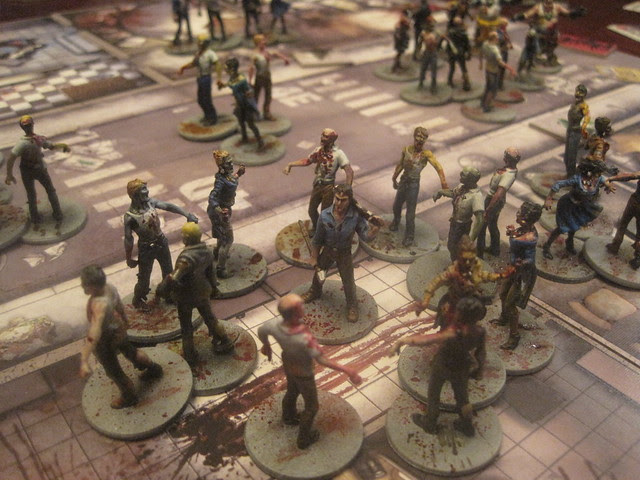 . . . and there was nothing that Machete and I could do to stem the tide. 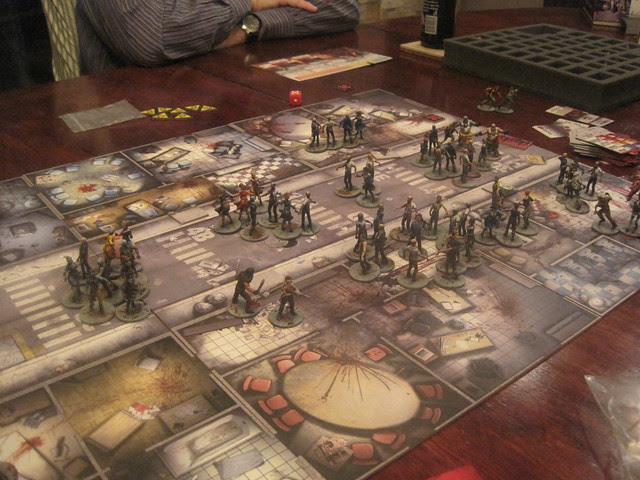 Machete and I then went down, fighting back to back; the outlaw and the cop who arrested him, dying together. 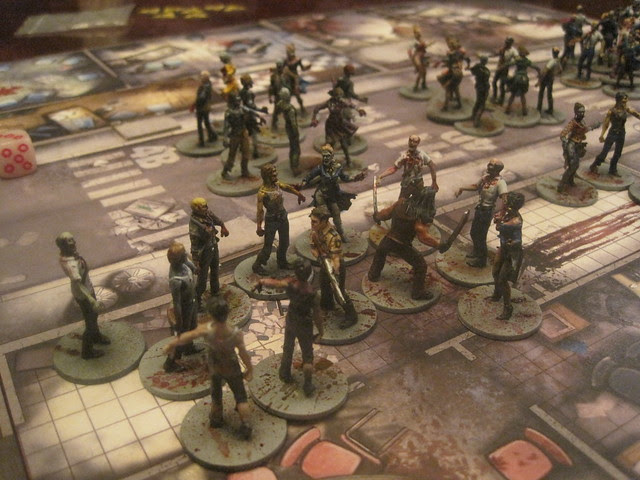 And in the end, even our most resourceful players couldn't hold them off. 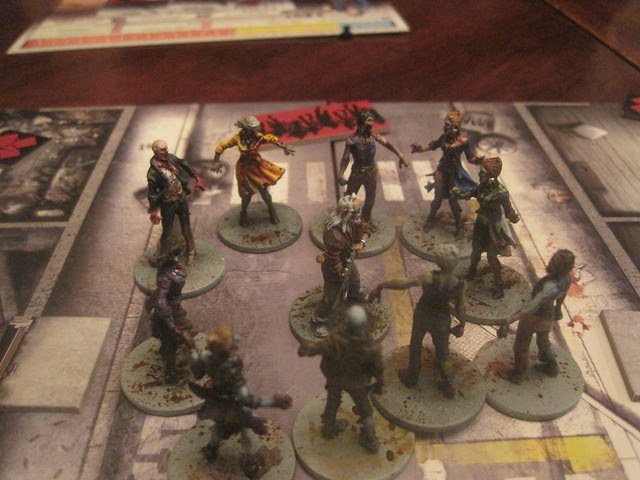 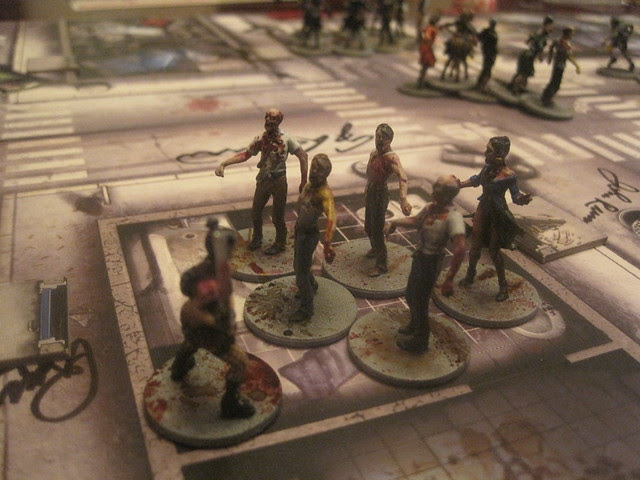 I was pretty bushed by that point, and hit the sack.  In the morning, between clean-up and packing, we squeezed in a few rounds of Lunch Money, Magic, and Zombie Flux.  The former will, I suspect, take on a "schedule-spackling" role at the club.  Magic is a game I've somehow managed to not play over the years, but I enjoyed it enough to join into the limited league some of the guys are playing.  Zombie Flux I brought from home; I've played it before with the Beloved, but it's a much better game with 7 players looking to cause problems ;)

Many, many thanks to marke for a terrific weekend.  We managed to stick to the "no stains, no fires" rule, and hopefully, we'll be able to do something similar again.

Posted by fireymonkeyboy at 8:20 PM