So, as occasional readers may have noted, I seem to have fallen down the Mersey-hole of late.  In addition to Pikeman's Lament, I've also come by copies of his "Rampant" games, both Lion and Dragon.  For the former, I've begun putting together some vikings (and am eagerly anticipating the soon-to-be-released viking supplement), but it's the latter that seems to have gained real traction in Monkeyland, mainly via the offspring.

Dragon Rampant uses similar core mechanics to Lion Rampant; IgoUgo, but with command friction, a broad set of generic troop types, standardized unit sizes, and a range of special rules that can be applied to distinguish units within the same troop type.  With DR, there's a much larger range of the latter (to accommodate the usual fantasy tropes), along with the option to take reduced or single model units.  As an example of the latter, when I used my GW ogre models, I ran them as heavy infantry, but with four, three-wound models per unit, rather than the usual 12 single-wound option.

The Cub and played a game of it early in the summer, and he was quite taken.  The rules are simple enough to pick up quickly, but allow for massive customization of one's army.  Add in that they are figure-agnostic, and you can put together pretty much any force you can think of.  Some long-time readers might recall that I bought into the original Reaper Bones kickstarter.  Between that box of minis (which the Cub has been steadily painting over the years, especially this summer), my collection of GW AoS stuff, odds and ends of historicals (when I bought a bag of the Victrix vikings, I gifted the Cub my unpainted wargames factory vikings - he put skulls on them, and runs them as Draugir), and the minis he's started collecting on his own, and we are spoiled for choice.

Where things really took off was when Cub dragooned the Puddin' into playing as well.  The latter has shown occasional interest in minis, mostly painting, but never much in play.  By her own admission, she played the first game with him to humor him ;)  It seems, however, that a game where she can simultaneously play both a fire-breathing dragon, and use both her My Little Pony figures, AND her LEGO unicorns, is right up her alley.  They played multiple games over the summer, including one where the two of them ganged up on the old man in a three-way brawl (which Puddin' won, straight up ;) ). 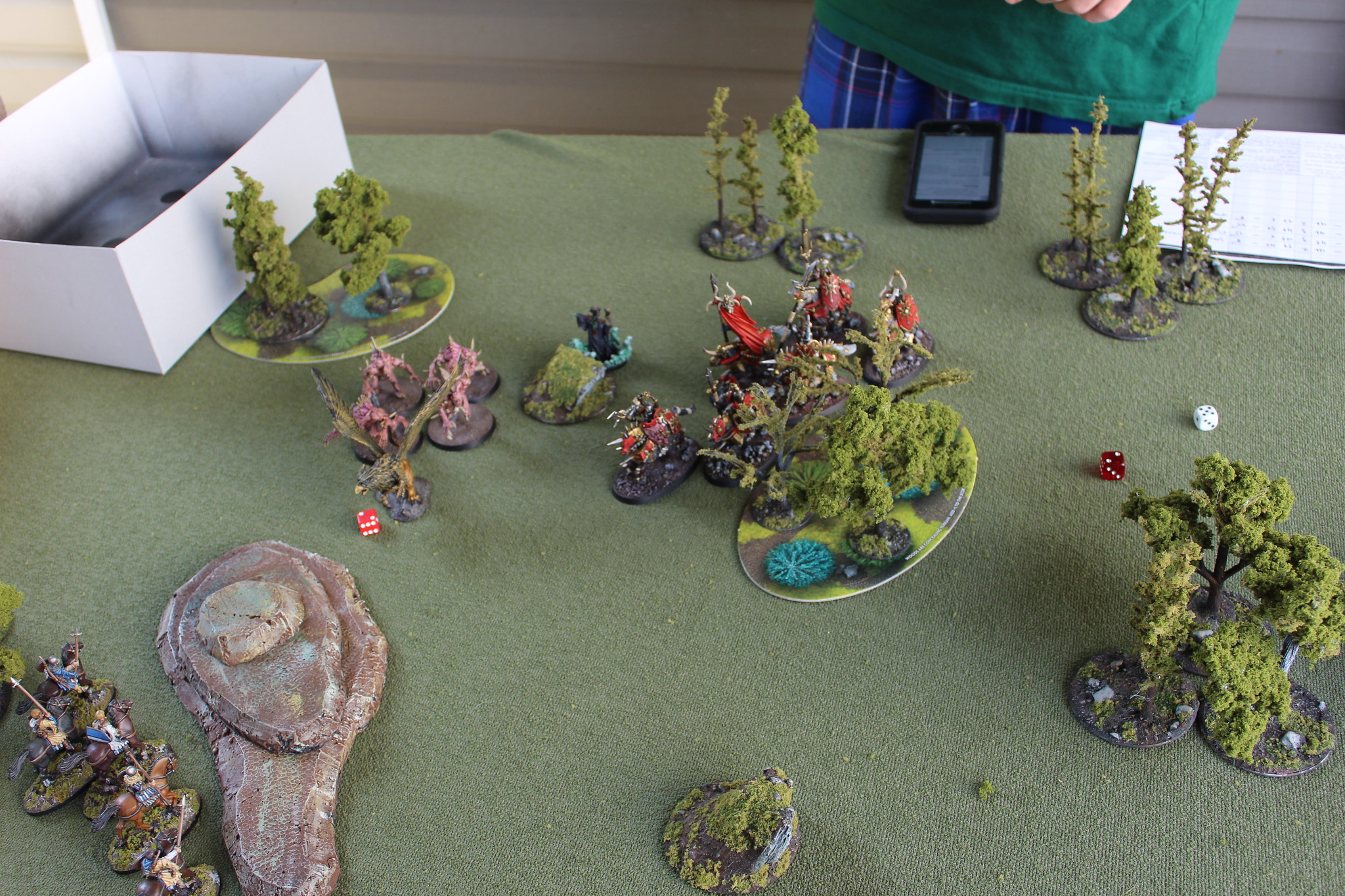 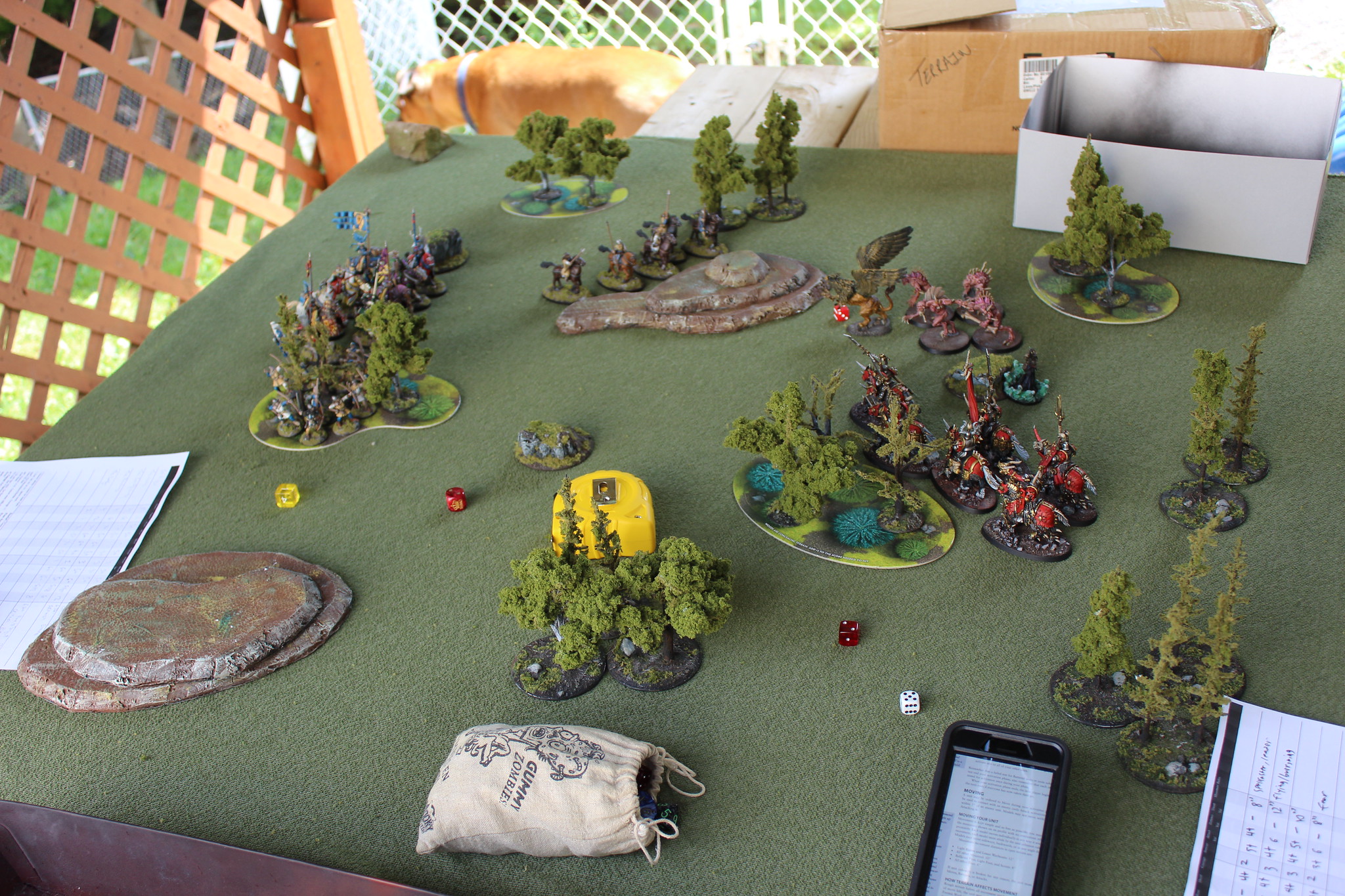 I am, needless to say, delighted by all of this.  While I don't know that Puddin' is about to make a deep dive into tabletop miniature gaming, finding a game she likes to play has been fantastic.  Finding a fantasy game that Cub likes is equally delightful; while he's always down for some 40k, and has shown a tentative interest in some historical play, his fantasy interests have been mostly limited to D&D.  As I write this, however, he's working on putting together a mixed undead force, made up of the aforementioned Draugir, some Wargames atlantic zombies he picked up, a D&D lich, and odds and ends from the Reaper box.  I'm generally cautious about "pushing" the kids into gaming; much as it's nice to share hobbies, I've always been leery of being one of "those" dads.  I have to say, though, seeing my kids enjoy something I love, getting to play a game with the two of them, has been a highlight of the summer.  Can't wait for more.
FMB
Posted by fireymonkeyboy at 7:44 AM