Have gotten in a few games with / against the kids over the last couple weeks, including a ripper of a 40k game against the Cub, and a multiplayer Dragon Rampant game against both the Cub and the Puddin'

The 40k saw me taking 75 PL of World Eaters against the Cub's Salamanders, and it was a solid game.  Cub is a far better player than he was even a few years ago, and the last several games we've played have been pretty tight.  This one was a neck and neck race until half way through turn 4, where I managed a couple of clutch plays that put me ahead to take the game. 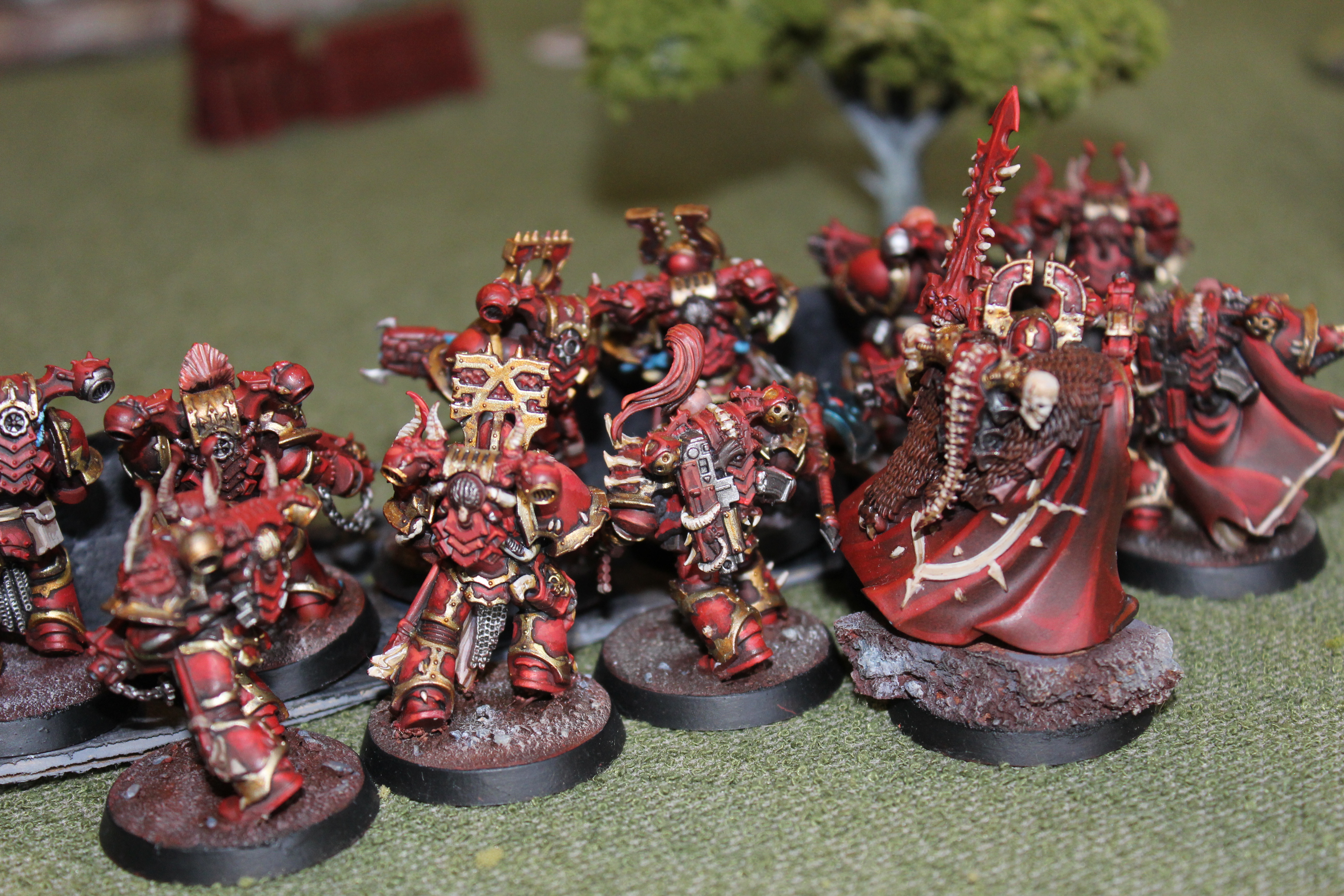 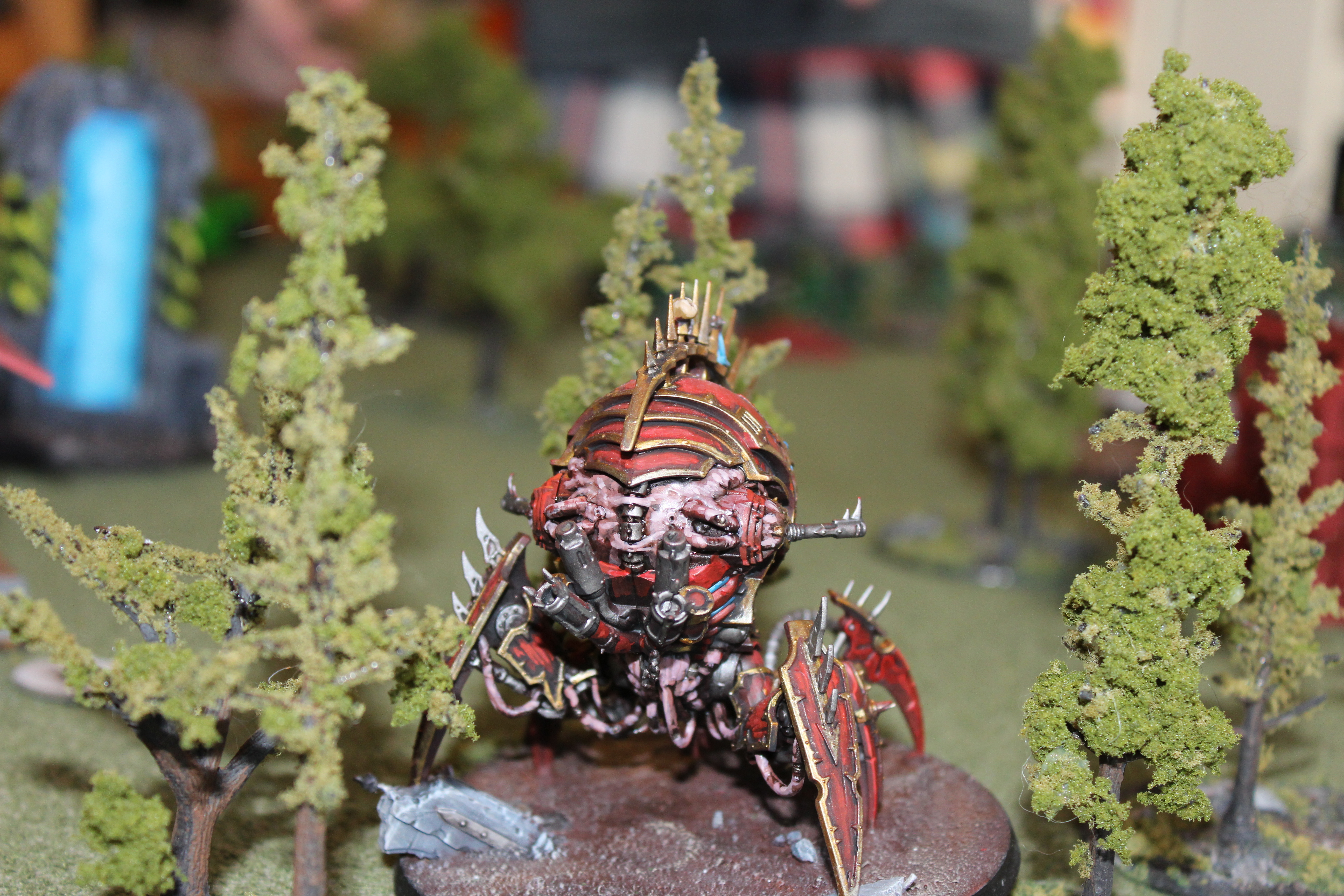 There were also some solid cinematic moments, including a clash between his dreadnaught and my hellbrute, in which the latter reamed the former with a multi-melta shot, was in turn charged and destroyed by the imperial, and then blew up, taking out the Astartes dreadnaught in the conflagration.  Unfortunately, I got so caught up in the game, I forgot to take pictures ;) 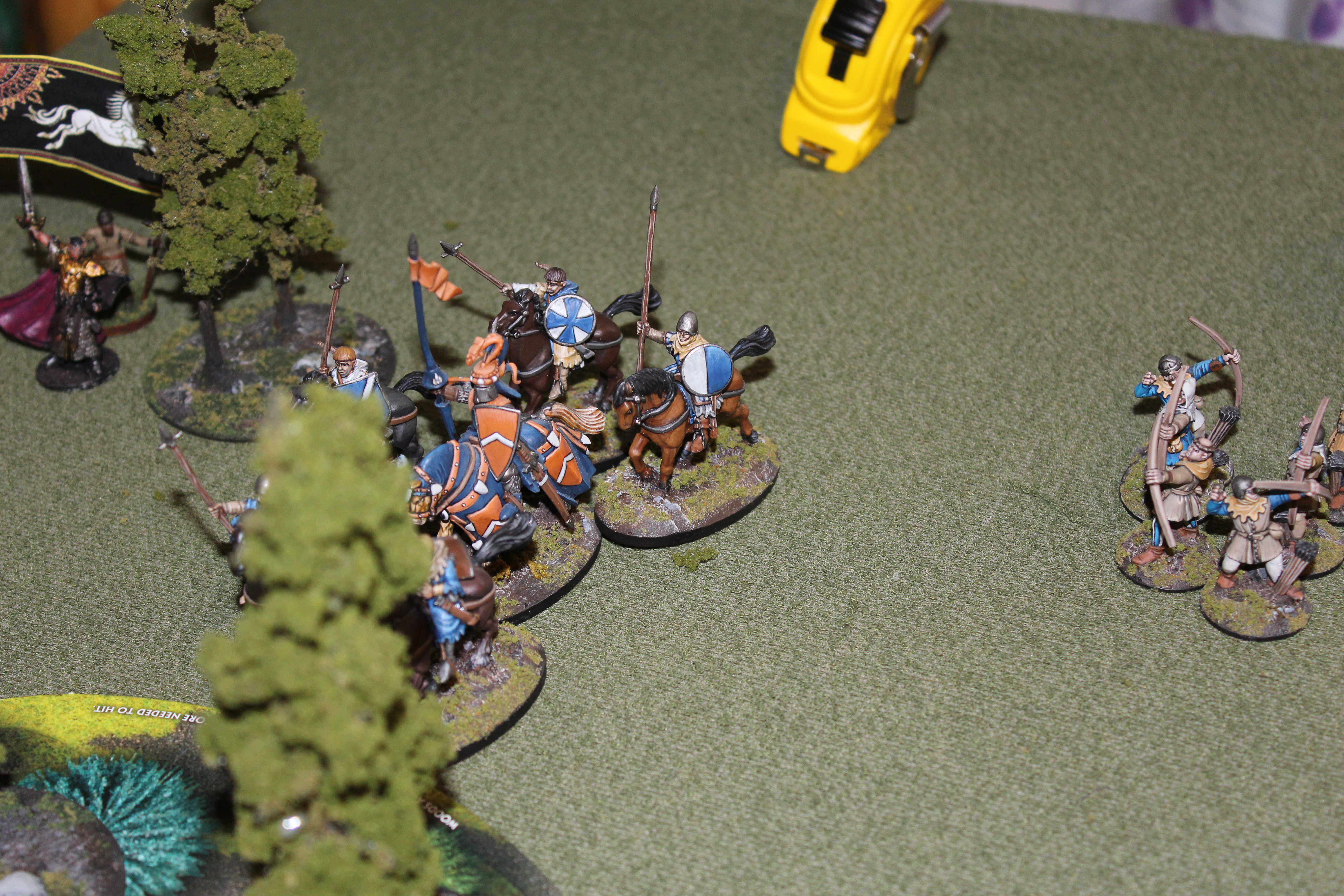 Dragon Rampant saw Puddin take a list made up of some of my old Bretonnian figures, a couple of heroes from the Reaper pile Cub's been painting, and a Gold Dragon (a D&D fig?) the Cub got for his birthday. 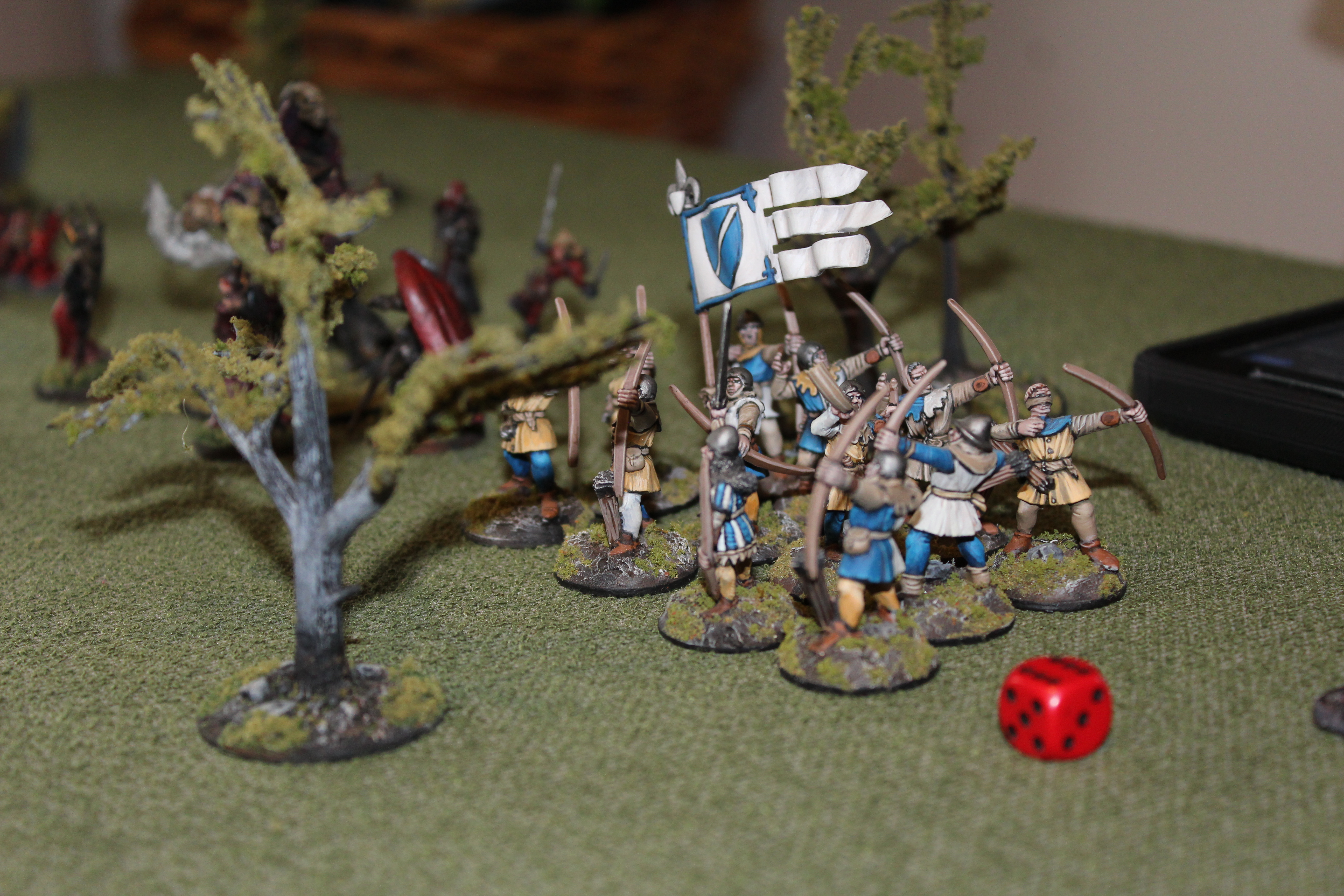 Cub took a similar mix of figs - some of my Bretonnians, some Reaper figs he ran as vampires, some kobolds, and a GW OG Daemon Prince ;) 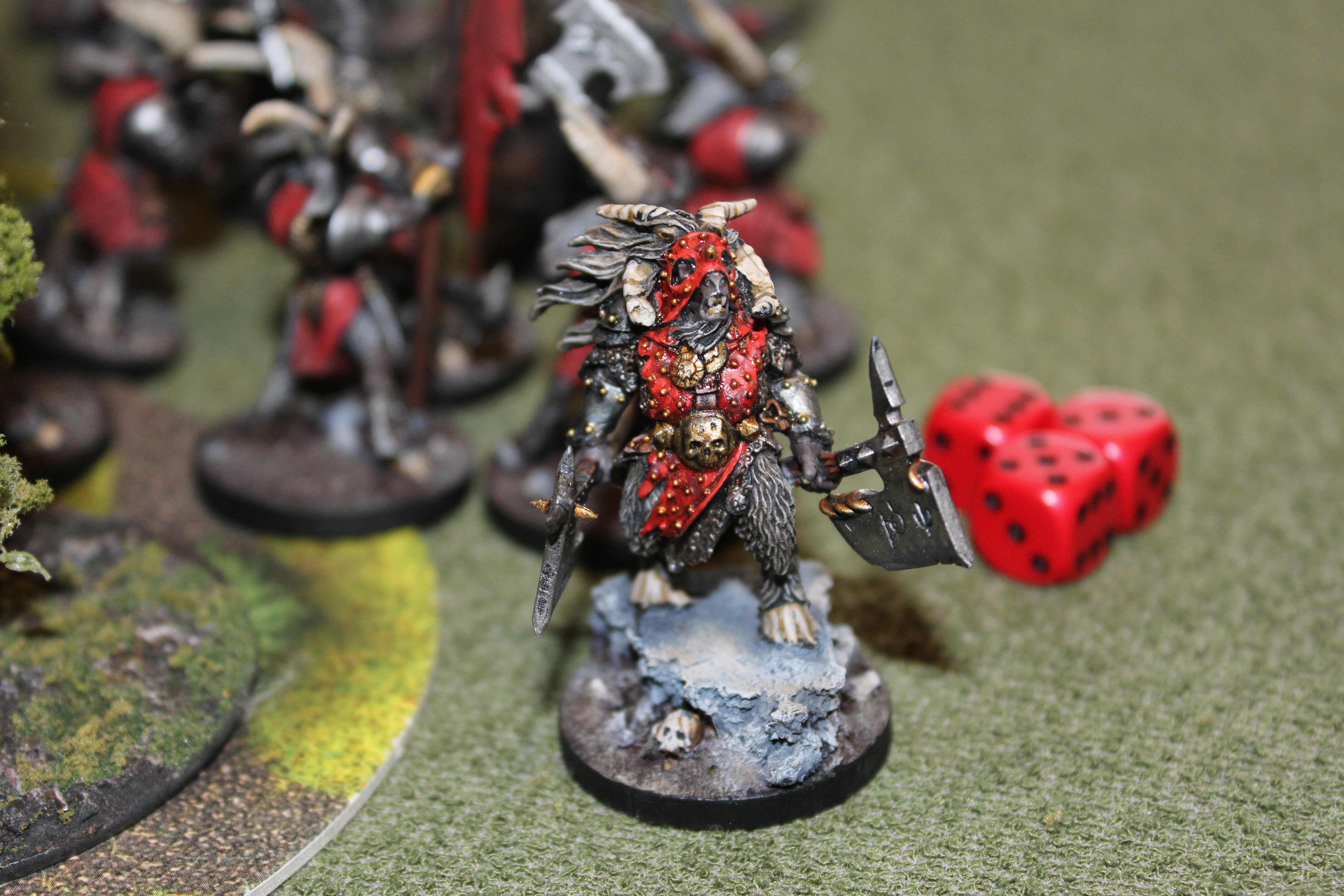 I took a bunch of Beastmen, which I ran mostly as bellicose foot, scouts and light missiles. 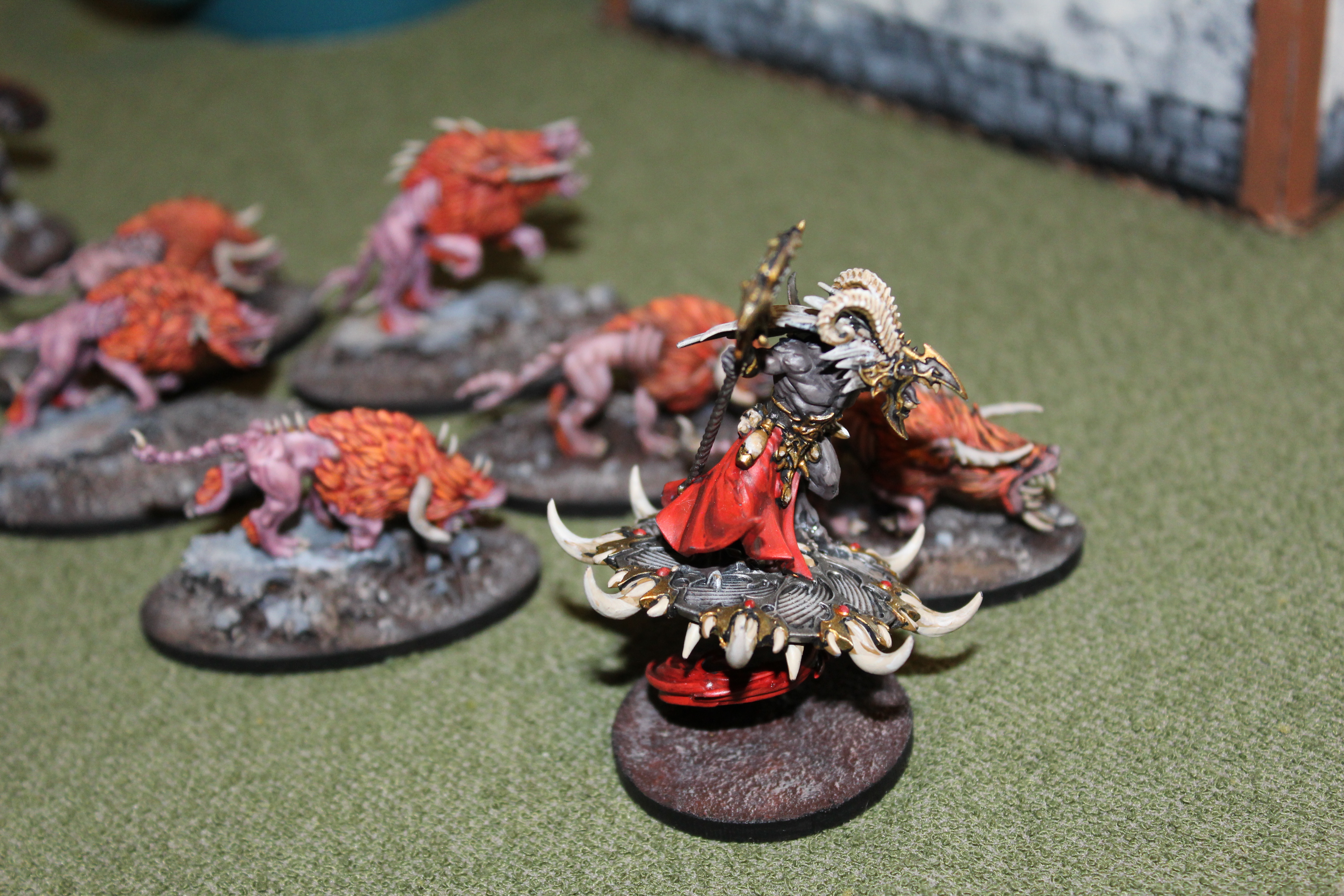 We played a modified version of the Ringbearer; basically, each of us designated a unit as carrying a McGuffin, and there were bonus points for eliminating that unit.  However, if anyone's force was reduced to just the McGuffin unit, everything blew up.  Not to foreshadow anything. 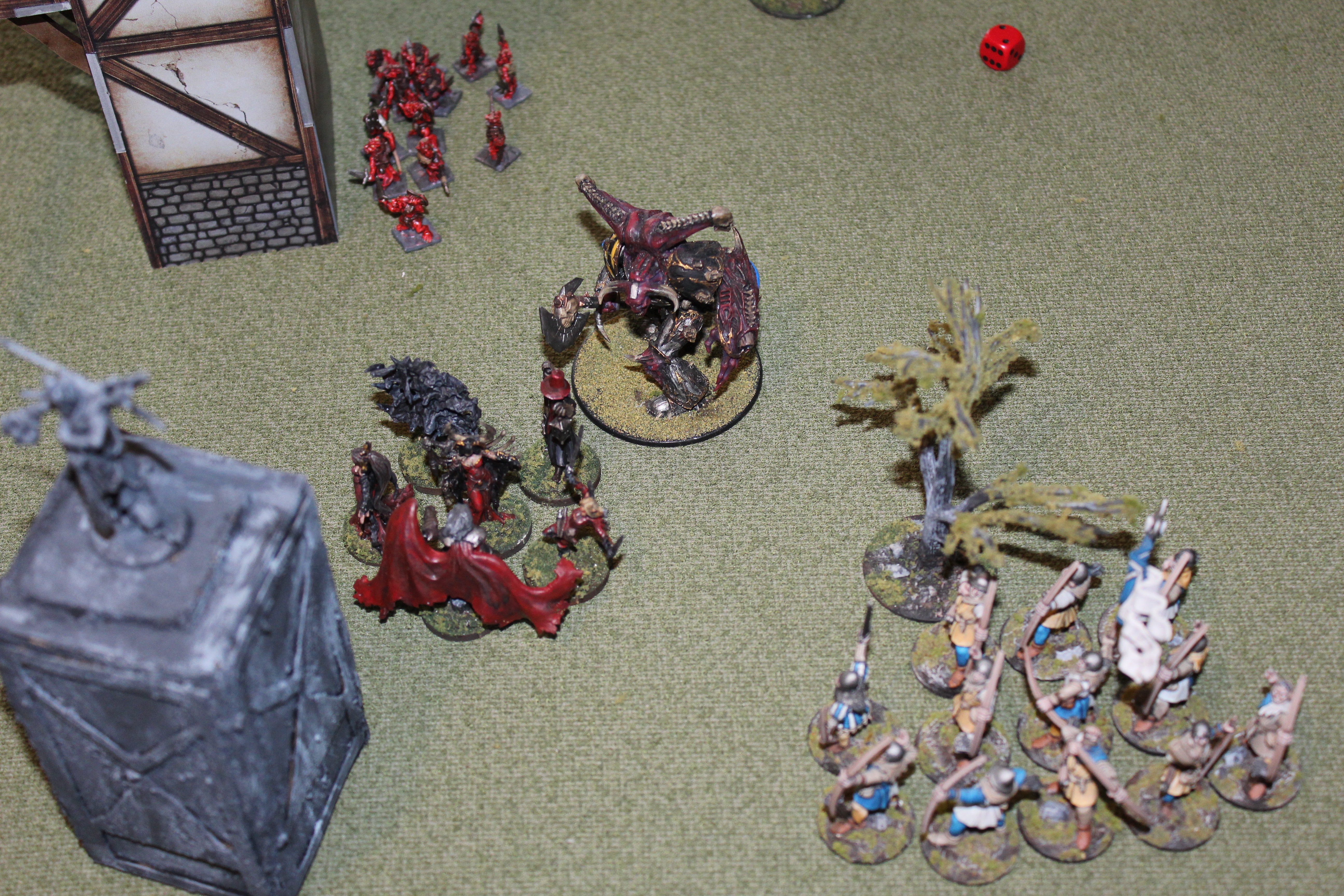 Cub and I advanced out, and began to tangle, eventually whittling down each other to a couple of units. 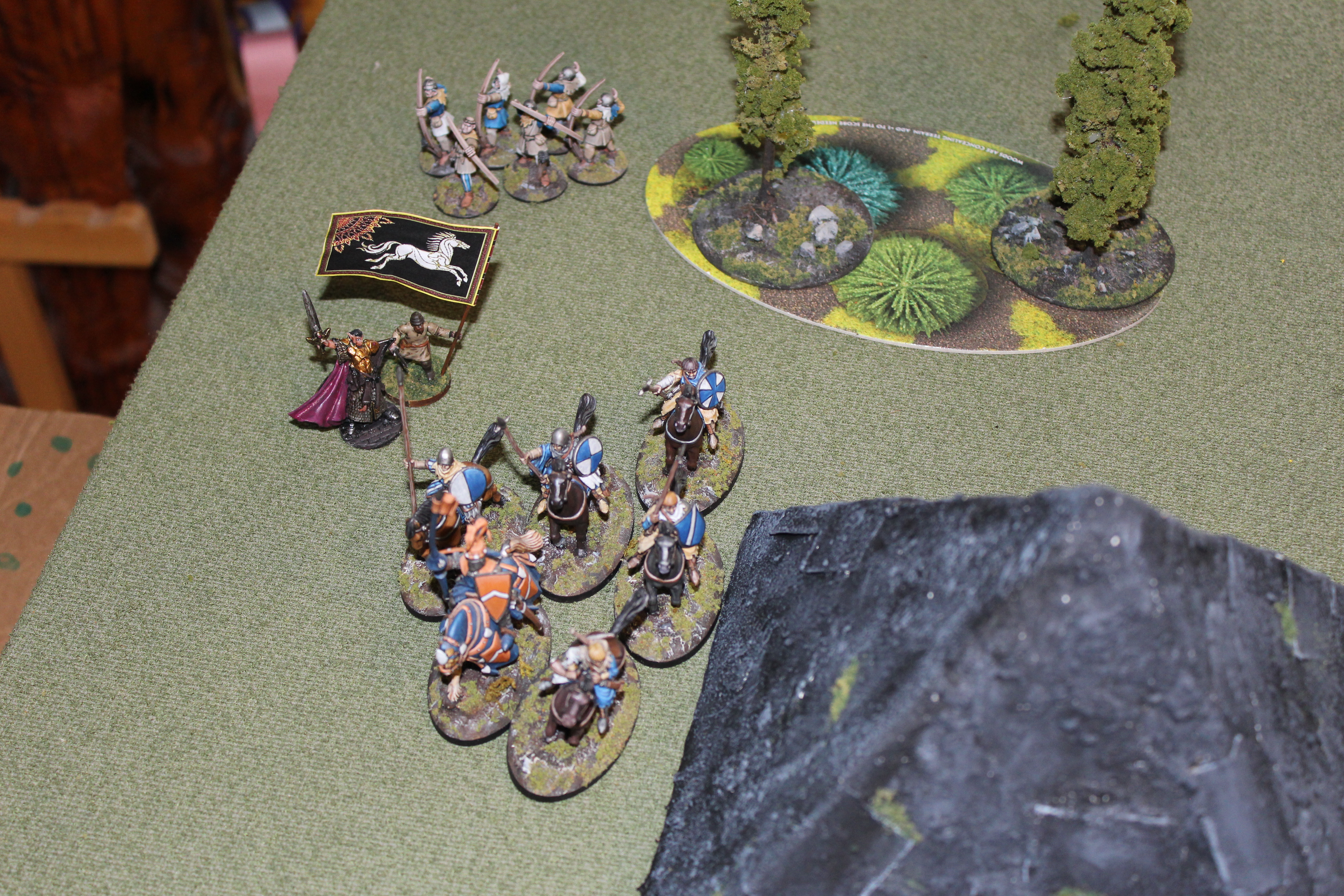 Meanwhile, Puddin' decided to play it cagey, and hid her force behind a bunch of terrain, encircling her dragon with everything else.  Not at all telegraphing what her McGuffin unit was ;) 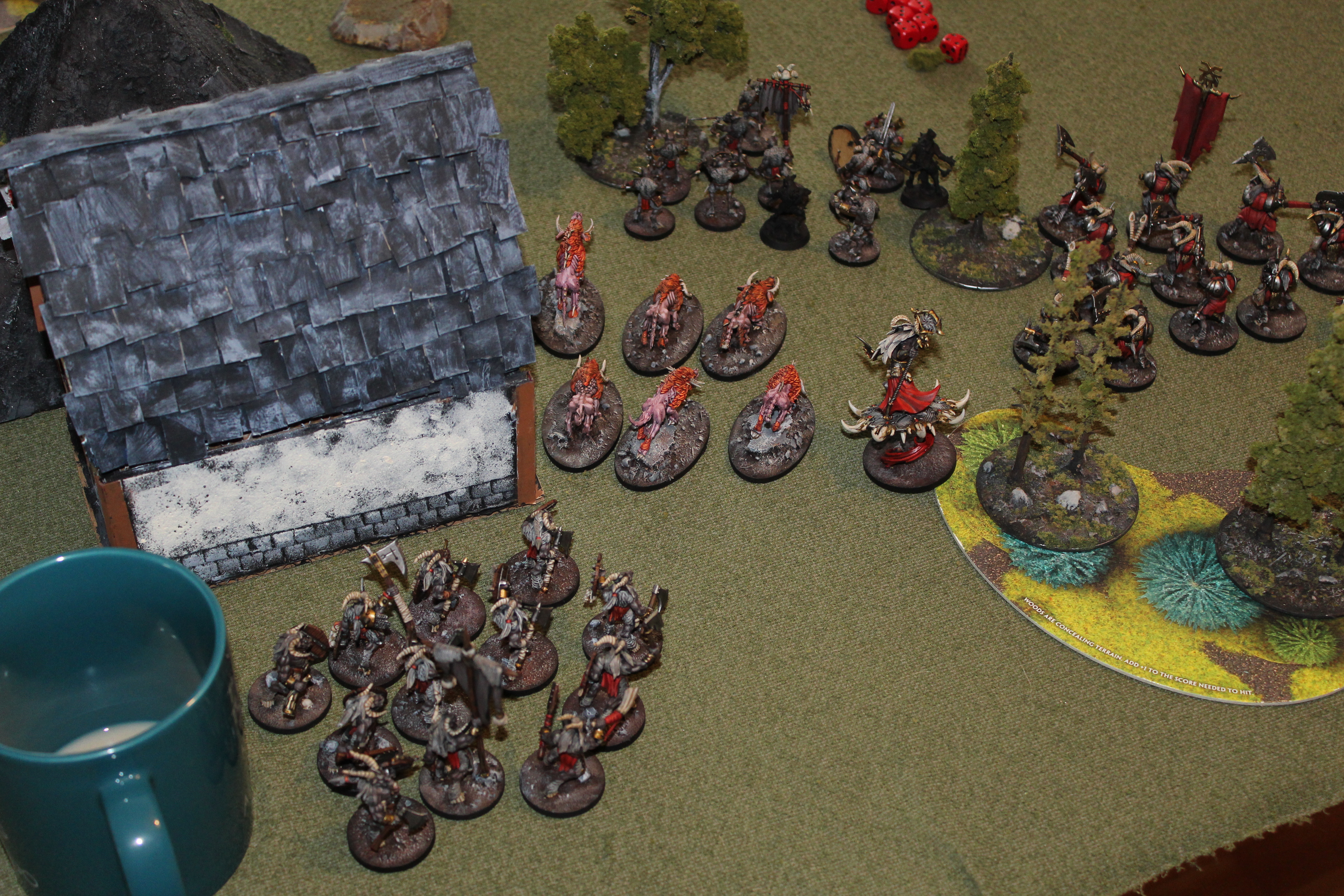 When we asked her why she wasn't coming out to fight, she quite matter of factly informed us that she was waiting for the two of us to tear each other up, and then would swoop into scoop up the win.  Kid is savage. 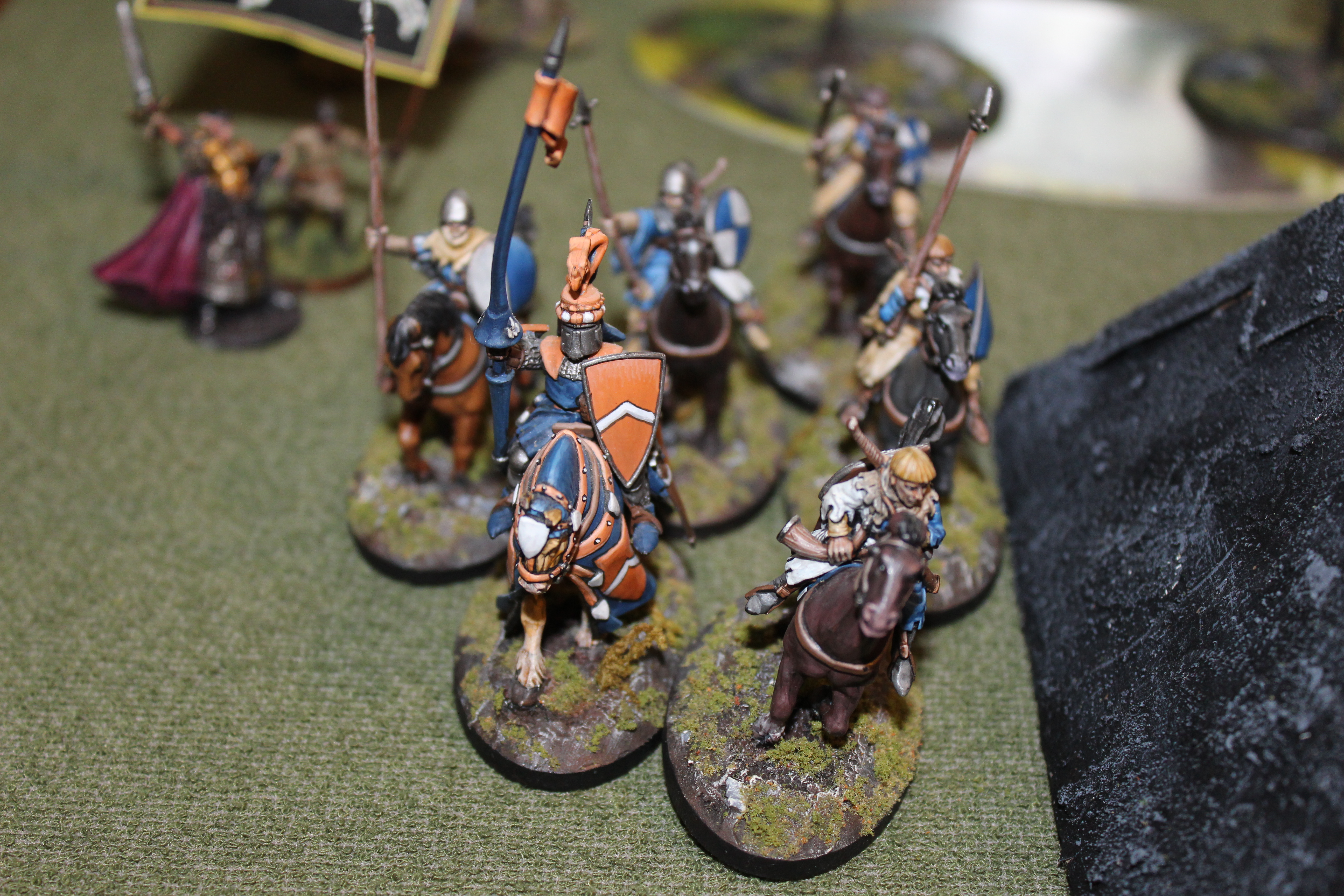 What actually happened is that I managed to take the Cub's force down to one unit, which turned out to be the "ringbearer", which blew up the game.  We were limited to points scored for side quests (the Cub picked one up for doing 3 strength points damage in a turn), and kills.  Cub and I tied on the latter, and his single point from quest completion gave him the win.  Puddin', who'd finally emerged from hiding to sweep us off the table, was left with none.  Her plan was sound, but she needed to work on the timing ;)
It was a fun game, and it was great to get to play with both of the kids.  While Puddin's not as enthused about mini-gaming as the Cub, she does seem to enjoy DR, especially the ability to pick and choose minis from the household's growing collections.  Games of Dragon Rampant also make for a nice break from the two of them ganging up on me in Munchkin, so there's that ;)
FMB
Posted by fireymonkeyboy at 8:30 AM