It's been a relatively productive month, albeit one where I didn't seem to manage to grab many pictures, and throw up a post.  Part of the aforementioned progress has been on the HYW French for Lion Rampant, as I've now got full units of Crossbow, Spear, and Horse to show off: 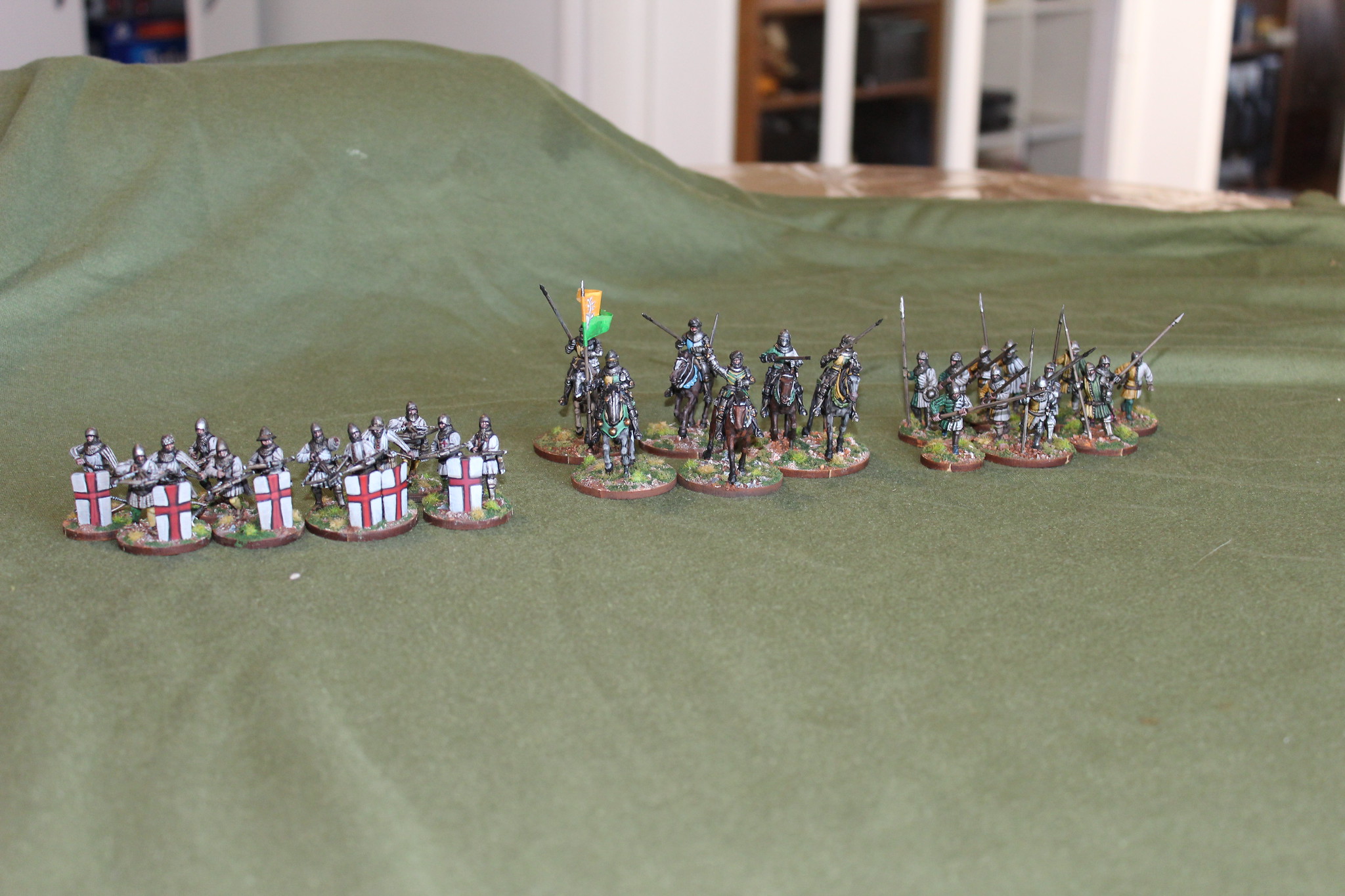 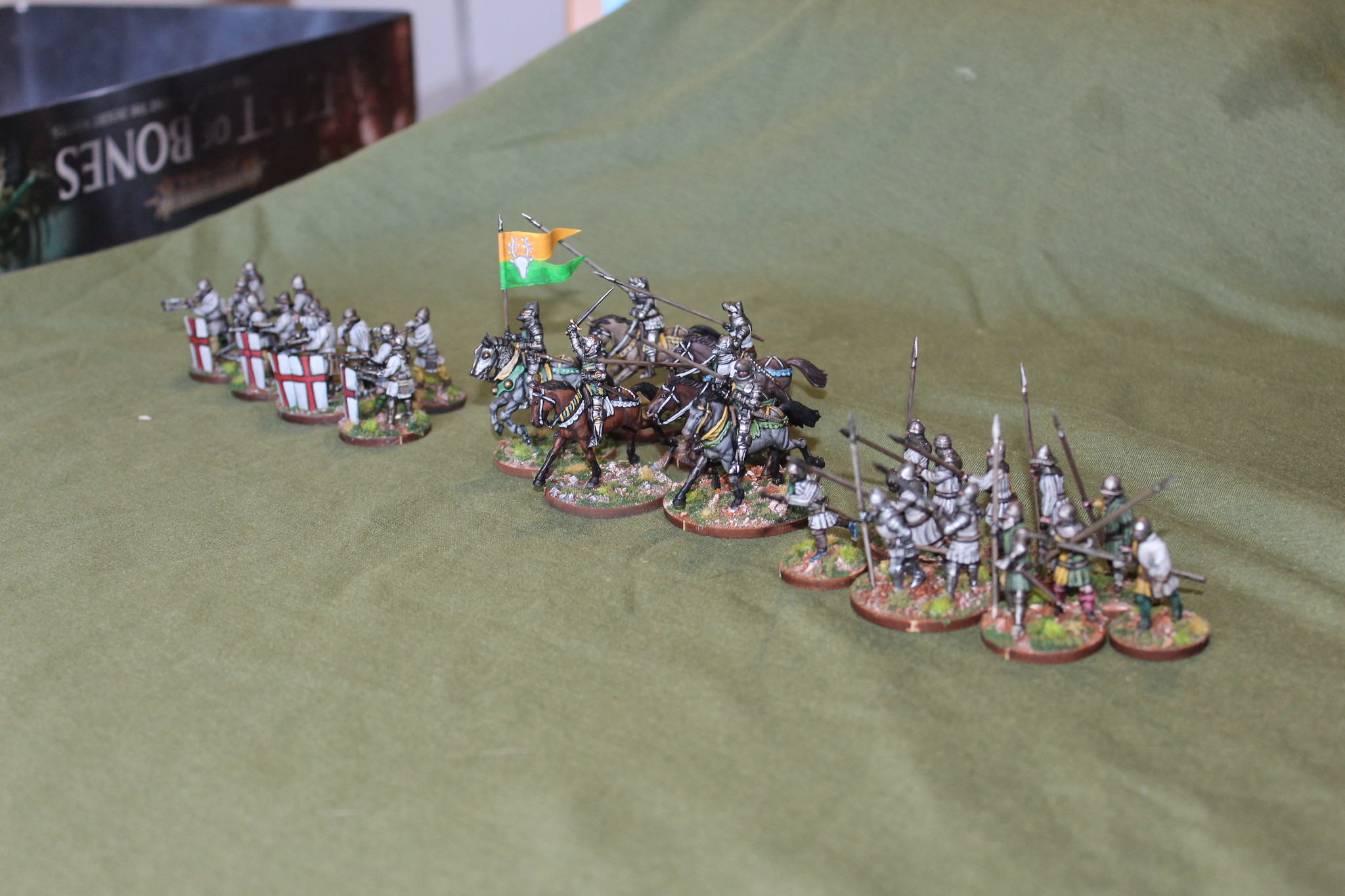 Such is the retinue (to date) of Sieur Jean de Cerf.  It's a bit of an homage to my old buddy in NFLD (who ran the Geektactica blog).  T'was he who put me onto Impetus, mostly via his inspirational 15mm HYW stuff. 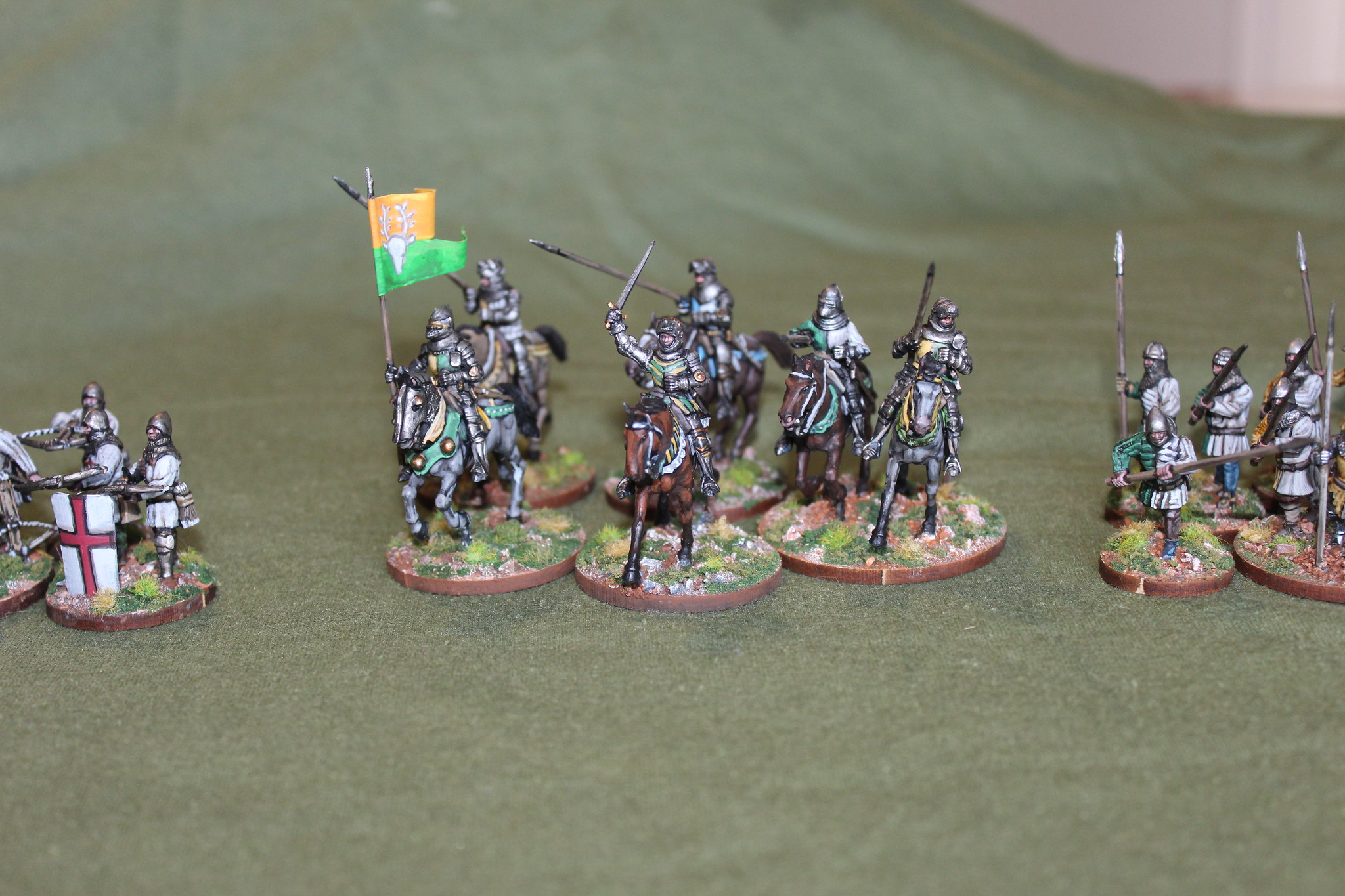 I've played around with basing a little, with cavalry mostly single-based (although there's one in there that's double), and infantry based between 1 and 3 to a base.  Lets me do a little bit of vignette play, while still giving me lots of flexibility on casualty removal, etc.
I did my crossbowmen as Genoese.  Digging around for colours on these proved challenging, at least in terms of "official" colours and livery, but I did find there's a close association between the cross of St George and Genoa, so went with that, white smocks, and leggings in colours that would tie them to the rest of the army. 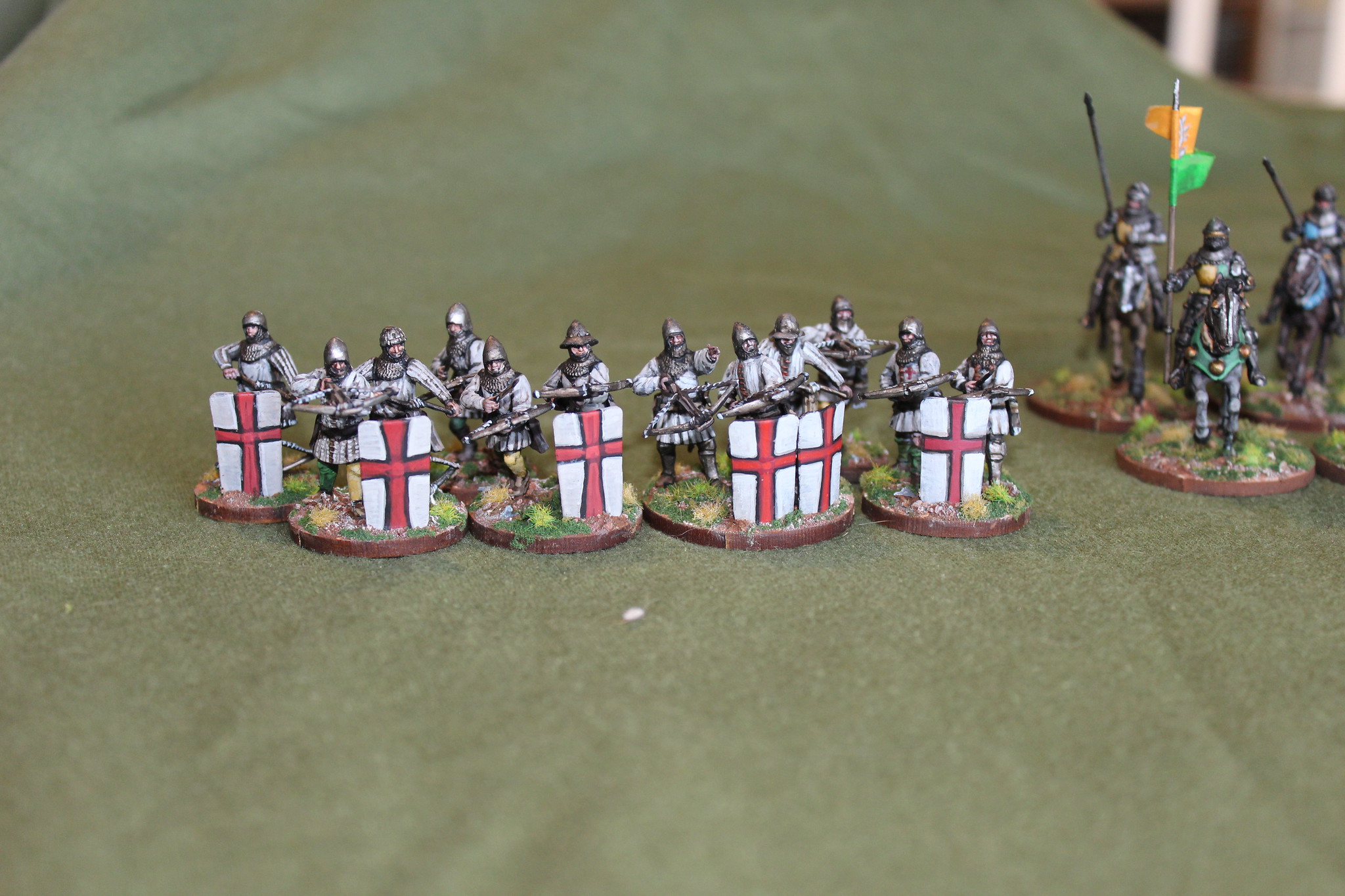 Spear were done in a range of colour combinations, but with their livery tied closely to the men at arms in Jean's immediate retinue. 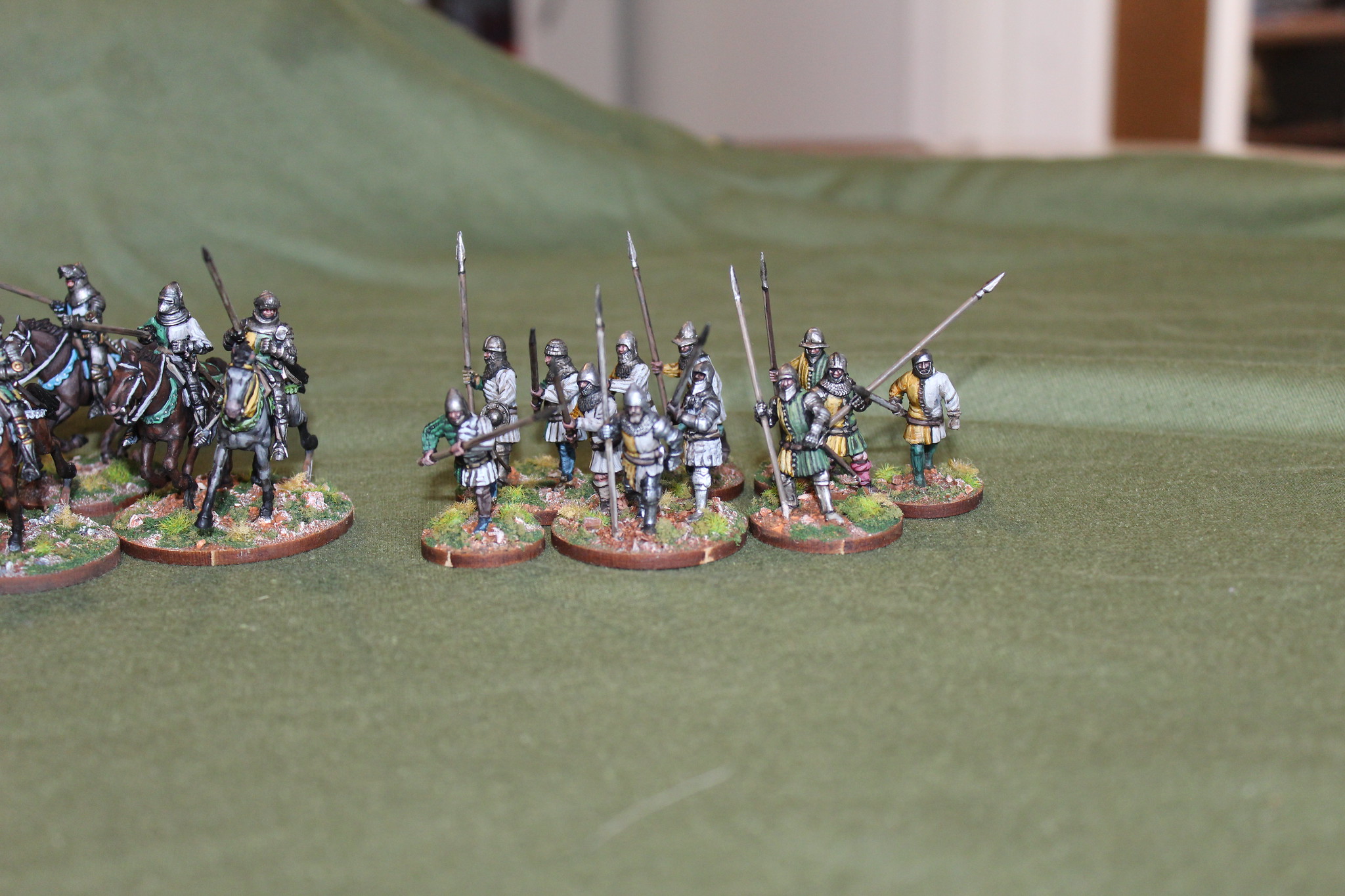 These are my first Perry plastics, and I'm in love with the kit.  Loads of variety, and the figures are realistically human proportioned.  Looking forward to playing around some more, and maybe working up some heavier infantry for the French, or more knights.
Short term, I think the plan will be to try and get a few units together for the English, so I can get in at least some small games over the summer.  I've been picking away at other projects - some 6mm, some more ancients and ECW, and finally got around to grabbing the most recent Ork codex, so they likely see some time in the queue, along with on the painting table.  Until then, stay safe and well.
FMB
Posted by fireymonkeyboy at 8:51 AM