Had a chance to (possibly re-)introduce DaveB to Warmahordes last night.  Small game, nominally 15 points (he ran 14, what he had painted, I ran 13), and mostly focused on showing him basic mechanics (although we managed to totally forget to use both our feats).

Being somewhat caught up in the whole pedagogy thing, I totally forgot to take pictures until the penultimate turn, which is a pity, because DaveB's done a nice job on his models. 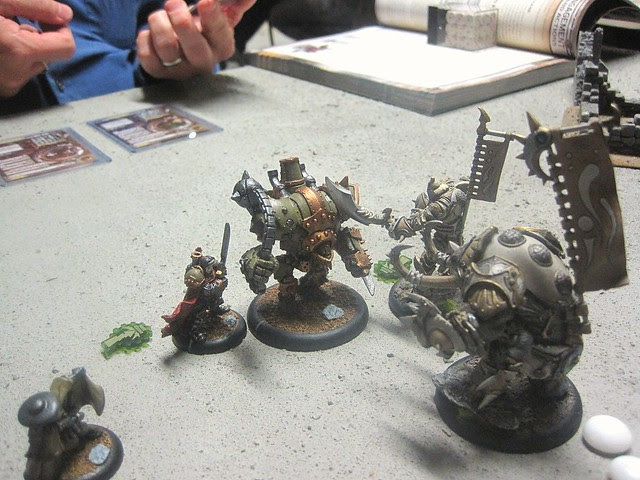 I ran my evolving Hexeris list (Hexy, Gladiator, Savage, Krea, min. Paingivers).  He was running one of my old favourites, Magnus the Traitor (a base canard, if ever I've heard one), more specifically his old box set (Mangler, Renegade, Talon) and Gorman di Wulfe, again one of my all-time favourite merc solos.  Many's the time ol' Gorman caused Kenoth of Menoth trouble in the John Street days in Newfoundland, but then I took an arrow in the knee . . . . 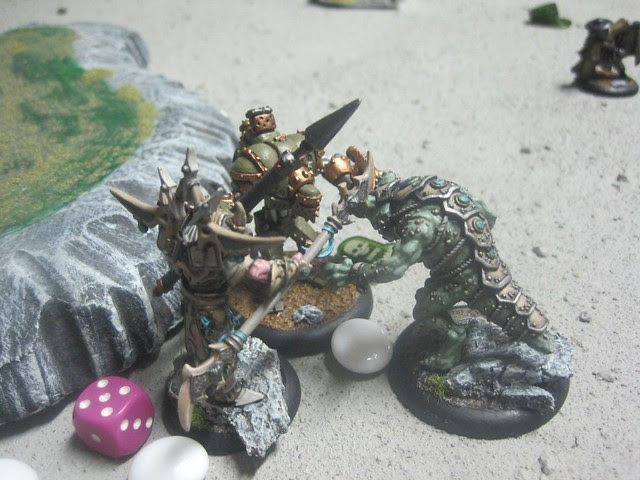 The game itself was pretty straightforward.  We advanced, and I suicide charged the Savage into the Mangler, doing some damage.  He countered by almost killing the savage back.  I moved up the gladiator, Gorman Black Oiled it.  The Renegade fired it's oblitorator rocket, wiping out most of the paingivers.  DaveB then split up his jacks, sending the Talon around the furball in the middle of the table towards Hexeris' flank, and the Renegade out to the other flank (thus learning a hard, but likely lasting lesson in the importance of control areas).  Long story short, Hexeris and the Krea did for the Talon, the Gladiator demonstrated the wonders of the two-handed throw (thus creating the opportunity to demonstrate the wonders of using focus to shake off knock-down), and on the subsequent turn proceeded to hammer the Traitor into a mealy pulp (I think it was the Gladiator, might have been Hexy himself). 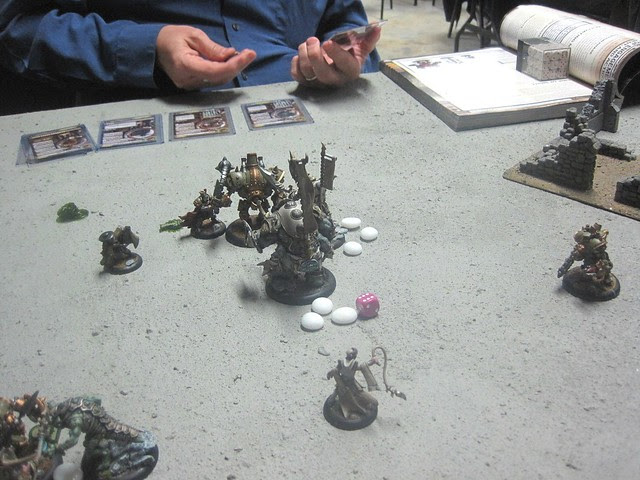 I don't know if DaveB has come to appreciate WMH as the greatest miniatures game of all time (the only right and proper view, except maybe for Blood Bowl), but he did mention that now that he's got a sense of how the game works, he's going back to his merc cards to see how stuff works, and how it might work together.*  I sense a unit of Boomhowlers in the future.

As an added bonus, OtherDave got to hovering over the game; he liked how the figs looked.  This is promising, as what's stopped him from playing was he didn't like the figs (!).  He's since been giving the new faction, the Convergence of Cyriss, a look, as well as Legion.  Both would be welcome additions to our little community, so fingers crossed.

This weekend it's Marke's Madness, a veritable glut of gaming.  Barring fear, fire or foe, I should get in a ton of games over Saturday and Sunday, and as long as I get pictures (and probably take notes), I should be spoiled for blog material over the next few weeks.

* Psssst!  DaveB!  Gorman's Black Oil fired from "can't miss" range =  lowered DEF.  Lowered DEF = likely hit from the Renegade's rocket.  A hit from the rocket = auto knockdown.  Auto knockdown = auto melee hit.  Auto melee hit + Mangler = dead just about anything.  Fun!  Can also be done via Magnus' mechanical arm, but Gorman remains your set-up guy.  Now you just need something to make a hole for the melee guys to charge in.
Posted by fireymonkeyboy at 11:25 PM