It's Victoria Day here in Canada, also known as May two-four.  This was, historically, the occasion upon which my grandmother (who I've come to realize was eccentric, though to me, she was just Nana), would ritually intone the following:

We shall have a holiday,

or all run away.

The beauty of May two-four, is of course, that while it is a beacon of tradition, precisely what tradition one follows seems pretty flexible.  Based on the super-abundance of memes on my social media feed, this is the weekend that many of my fellow Canadians traditionally devote to getting pie-faced and piloting Sea-Doos. 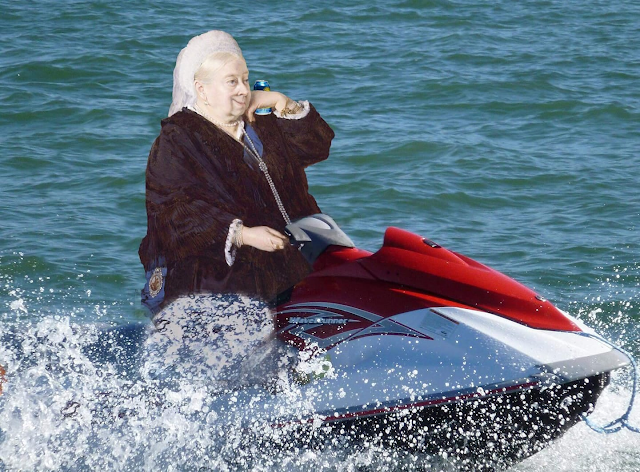 I know it more as the weekend after which one traditionally can plant with only reasonable risk of frost, aka, the weekend I spend digging out the garden.  These days, since I do much of the gardening, live in a place where it rains 3 days in 4, and am married to someone with Olympic-class pollen allergies, I managed to duck that traditional duty, and instead spent a pleasant couple of hours playing Pikeman's Lament.  While the garden will still need digging, I'm currently enjoying a nice glass of Dewar's, and writing this, which seems a far more civilized way to commemorate Queen Vic than either spreading diesel waste or digging in the mud ;)

It's the second game of PL I've played, and I opted, perhaps unsurprisingly, for the second scenario, Patrol.  This has the two forces attempting to pass by each other, to exit the table on the opposing side.  It has a turn limit, based on the slowest movement on the table.  Basically, enough turns that the slowest moving unit could travel across the table, in a straight line, along the shortest path.  For my game, it was 10 turns.  It quickly became clear that actually getting units, particularly Foot, off the table would be tricky, but the scenario did impact game choices; in the end, you win based on the units that "escape", and that gives you reasons to try and evade where possible.

I used different lists this time around.  Although the core of my Scots remained more or less the same (Pike, 2x shot, regimental gun, Trotters), I dropped the unit upgrades, and took a unit of dragoons.  I was impressed last game with their utility, and will likely turn my hand to updating the ones I have.  My current supply of dragoons arrive painted as part of the Big Trade, and while they're nicely done, they don't fit in as well as I'd like with what I have.  Some TLC and rebasing are likely in order.
The Royalist side was a significant departure, in that I built it around a core of the Warlord figs I've painted up since last time.  The Royalists took 2x Pike, 3x Shot, and a unit of Gallopers.  While PL seems very much oriented towards the Petite Guerre elements of the ECW/W3K, this would be a clash of more conventional forces.
Scots won the roll to be the attacker, and deployment commenced.  There's a nice element to PL in which slower units (foot, basically) deploy before faster ones, or scout units like Dragoons, and defenders deploy before attackers.  This leads to a staggered, alternating deployment in which one gets to respond to one's opponent - and presumably might influence force selection for a more analytical player than I am ;)
After a slow start (Scots rolled a blunder to activate their first unit of the game, causing them to lose their turn, and the unit itself to waver), the Scots pushed forward.  The Trotters moved out to the flank, while the Dragoons pushed up to try and cover the fords.  I'd set the table up with a creek running across it (difficult ground).  While crossable, it would slow progress, except at the fords.
The Royalist side, at this point, caught a bit of a break, when their Gallopers rolled a double 6 to activate.  I seemed to roll a surprising number of both double-1s and double-6s this game.  Don't know if that was just the odds, or if the Auld Queen was looking over my shoulder.  In any event, the Royalist horse (which I'd just put together the other day), surged ahead on a double activation.
There were a few turns of manouevring at this point.  Both the Royalists and Scots pushed forward, shaking out into lines in an effort to both block the opponent, and bring their forces to bear.
The festivities opened when the Scots frame gun, which had struggled to activate for several turns. managed a beauty of a shot at the approaching Royalist horse, which was followed up by a volley from the Scots Shot at the Ford.  Riddled with shot and cannister, the Royalist Horse recoiled.
This gave the Scots horse the chance to cross the river (leaving the ford open to the infantry), and set themselves up for a charge.  At the other ford, the Scots dragoons and second Shot had established a defensive line, but the Royalists had seized the hill, and their Pike were pushing down the road.
The Scots horse charged, scattering their Royalist opponents, but effective fire from the Royalist lines withered the Scots dragoons, and drove them back from the copse of woods in which they were hidden.
In the meantime, the forward Royalist units, particularly the shot, continued to pour fire into the Scots pushing towards them.
The Royalist pike block on the right flank surged forward.  While they'd have to weather a turn of fire, they were poised to smash into the Scots shot defending the ford.
The charge of the pike was enough to drive back the Scots shot, who wavered, but rallied in the next turn.  While they'd be able to stand, they lost the turn reorganizing themselves. 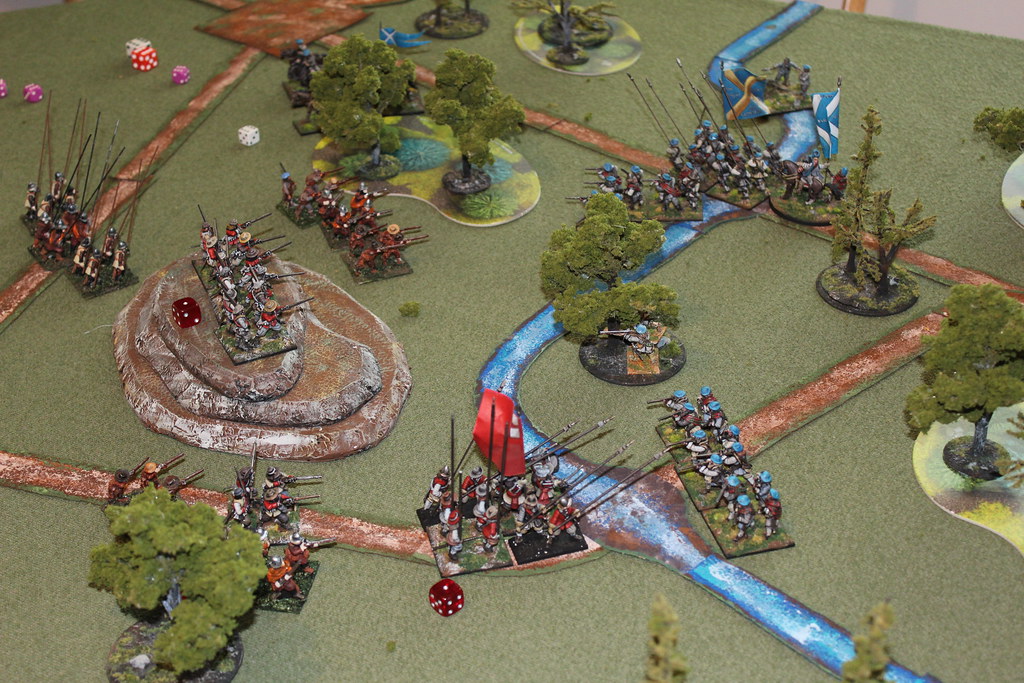 On the other flank, the Scots horse pushed forward, looping around the woods to threaten the Royalist flank. 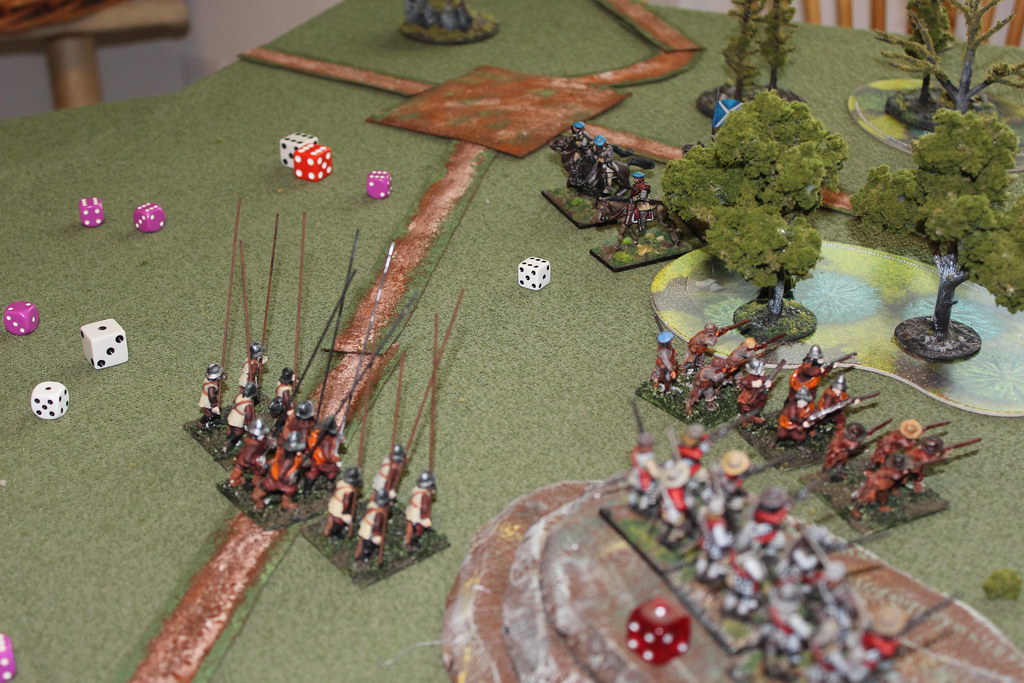 The game was winding down now.  The Scots charged the Royalist shot unit, drove them back wavering, survived the next turn (when the Royalists flubbed their activation roll), and then made haste for the table edge.  They were the one unit with a chance to get off table before the game ended. 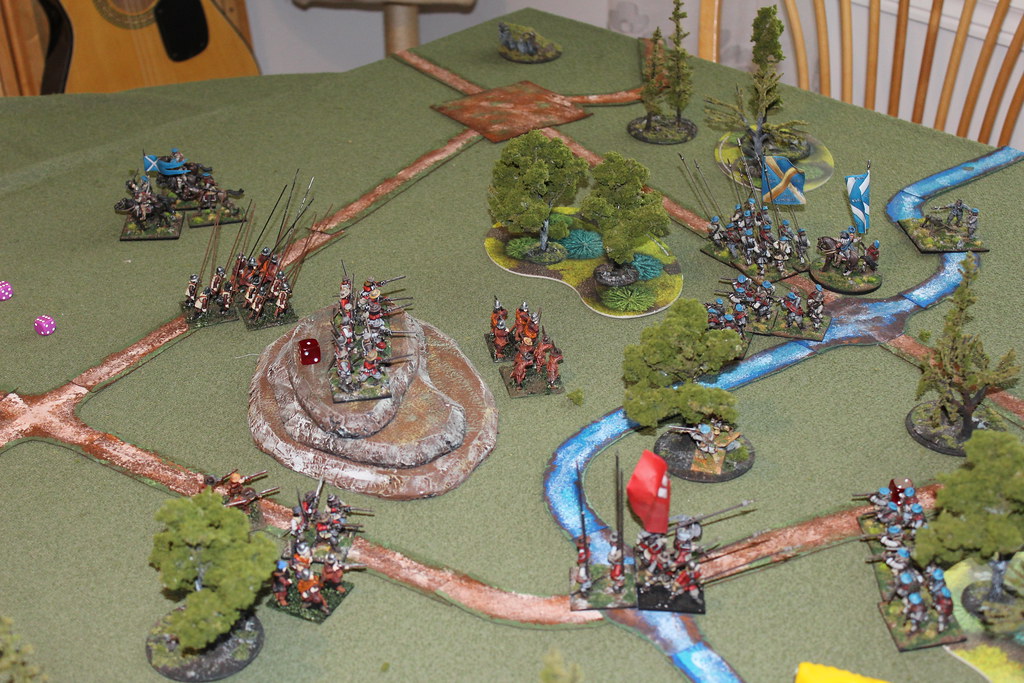 Meanwhile, on the other flank, the Royalist pike kept driving back the Scots shot, which, while taking casualties, held on, and managed not to break.
With the Scots horse off table, and the Royalists pushing hard on the right, the game more or less wound down.  No other unit was going to make it, and with each side having dedicated the bulk of it's strength to the right flank, had the game continued, they'd likely have been free to either push past, or need to significantly redeploy to engage.
The Scots took it, essentially 1:0.  This was a much more even fight than the last game, and the scenario, while perhaps not determining, did matter.  It meant that fighting was more about breaking a hole for other units to follow, rather than the point itself, and affected some choices directly (for example, the Scots pike kept pushing to the flank in an effort to evade the barney in the middle of the table).
I quite like Pikeman's Lament.  Given the small sample I've experienced, the game moves well, the scenarios impact play, different units play clear roles, and it looks good on the table.  While I suspect there's a fair bit of learning curve to go, this game went much smoother than the first, and I'm looking forward to many more games to come.  I'd been losing a little steam on painting the Royalist opposition, but I'm now looking forward both to getting the horse finished, and adding some options to the Scots.
Posted by fireymonkeyboy at 3:02 PM